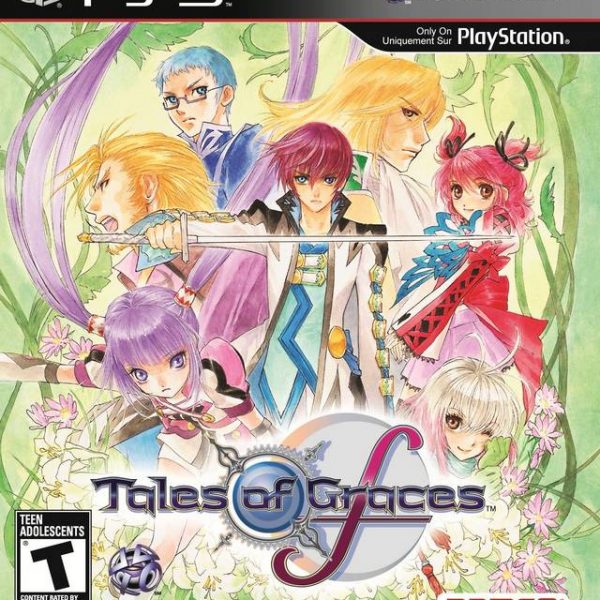 Where were you the day you heard the news; the news that changed the United States of America forever? It was a day like any other day, but then you learned of something groundbreaking happening. Something so cataclysmic, you dropped what were you doing and called your loved ones and friends to make sure they were up to date. I am talking about the day that you heard Tales of Graces f would be fully localized and polished to perfection. I was floored to learn of this news. Since then, I crossed off the days until it finally arrived. The wait was worth it because Tales of Graces f is a great game.

In classic Tales of nature, the game begins with a gorgeous anime opening that sets the mood of the adventure. When you begin a new game, you will be introduced to some young children who you get to control for the first hour or so. I wasn’t thrilled by this, but once their little portion ends, the game truly begins. It stars a man named Asbel Lhant, the son of the Lord of Lhant. After experiencing a great tragedy as a youth, Asbel becomes a knight for the Kingdom of Barona. Asbel gets to meet new friends, and reconnect with old friends in an epic tale about war, betrayal, and most importantly, friendship. Yes, “the power of friendship” theme might seem a bit tired, but stick with it. Besides Asbel, you get to meet his brother Hubert, a peculiar prince named Richard, an amnesiac named Sophie, Asbel’s childhood sweetheart Cheria, the knight captain Malick, and the spunky engineer Pascal. This group of seven makes for some wonderful dialogue whether it’s in the story or during one of the classic Tales scripts.

For every one memorable moment in the story, there are one hundred memorable moments in battle. The claim to fame for Tales of has always been its battle system, and Graces delivers tenfold. Unlike Tales of Vesperia or Symphonia, Tales of Graces f doesn’t use magic points. Instead, battles revolve around Chain Capacities (CC). All actions, with the exception of moving and guarding, require CC. For all intents and purposes, your CC acts as a stamina bar. Even the most basic attacks are more than just a standard slash, but they require at least one CC. Basic attacks are called A-Artes, and are the backbone behind forming combos. Instead of a standard three hit combo, characters can perform unique attacks that utilize their weapons as long as they have enough CC. Each character has an A-Arte Tree that shows how to perform each attack and the required CC. At first, characters won’t have much CC so their attack patterns will be limited. As they grow, their CC limit grows and results in the ability to perform amazing combos. Alongside A-Artes, characters have unique B-Artes. Asbel will enter a new stance with his sword, whereas Malik will be able to cast elemental magic. My personal favorite character, Cheria, can use healing magic along with devastating thunder magic. B-Artes can be chained along with A-Artes, but some characters can perform combos by beginning with a B-Arte. It all adds up to a unique and highly addictive battle system. It may take a bit of adjustment. However, once you realize you can essentially chain any attack together, you’ll have a hard time going back to an orthodox battle system.

After a battle, characters will gain experience points and skill points. Skill points are for Titles, a feature that has existed in the series for years. However, Titles are now more important than ever since they are what allow characters to learn new skills, upgrade their current skills, grant bonuses and more. With over 100 titles for each character, building a character has never been so fun. Battles are the best part of the game, and when your characters learn new skills from their Titles, the fun never stops. However, there is still plenty to do outside of battle. Joining the usual talking to NPCs and shopping for gear, various aspects have been added and/or upgraded. The first feature is Dualizing. By taking two items, you can combine them to form something else. It’s a simple, yet effective way to earn money, upgrade your equipment and create new items for cooking. Cooking is now a simple process of combining two raw ingredients. However, cooking got a huge upgrade thanks to a feature called the Eleth Mixer. By putting food in the mixer and fulfilling certain requirements in a battle, the meal will get cooked and used immediately. Not only that, the mixer allows you to make items and grant certain bonuses.

Originally on the Wii, Tales of Graces f looks gorgeous in HD on the PS3. Inomata created some colorful characters and the animated cut scenes thrown in during key events show off her work. One of the game’s themes revolves around flowers, and Tales of Graces f has lots and lots of ’em. You’ll be experiencing plenty of pinks and purples as you travel the world. Unfortunately, a few of the events in the game show that the transition from Wii to PS3 missed the mark. At times, character’s heads will shake rapidly and other times you’ll notice a load time longer than usual. Aside from that, this is a beautiful game in and out of battle. Those who are Tales of junkies will be glad to know that the anime cut-ins are back during the Mystic Artes.

As you can see, Tales of Graces f is a game that has some of the best of everything. Unfortunately, no game is perfect, and Tales of Graces f isn’t an exception. The biggest flaw in Tales of Graces f is the music. Usually, Motoi Sakuraba and Shinji Tamura are the two composers for a Tales title. Sakuraba’s style is evident in a few areas, but Tamura seems to have created more of the tracks. Thus, most of the songs aren’t very exciting and quickly loop. When the music is good, it’s good. But when the music is bad, it’s bad and it’s bad often. Aside from that, the cast did a wonderful job of voicing each character. A group of well-known voices from games and anime lent their talents and delivered solid performances.

The music isn’t enough to bring down the score, but one thing is: side-quests. We’re in an era in which fetch quests with random items and random drop rates are a thing of the past. Seriously, I want to know who at Namco decided to create these ridiculous fetch quests that can take the entire game. Despite this fact, Tales of Graces f is one of the best games out there. All of the waiting and hoping paid off. It should go without saying that fans of the series should check it out, but fans of great games should check it out, too. Also, if you want to see Tales of Xillia brought over here, you better buy a copy of Graces f. Just throwing that out there. Tales of Graces f is a solid title that all should pick up and enjoy. Be sure to pick it up once you finish reading this review!