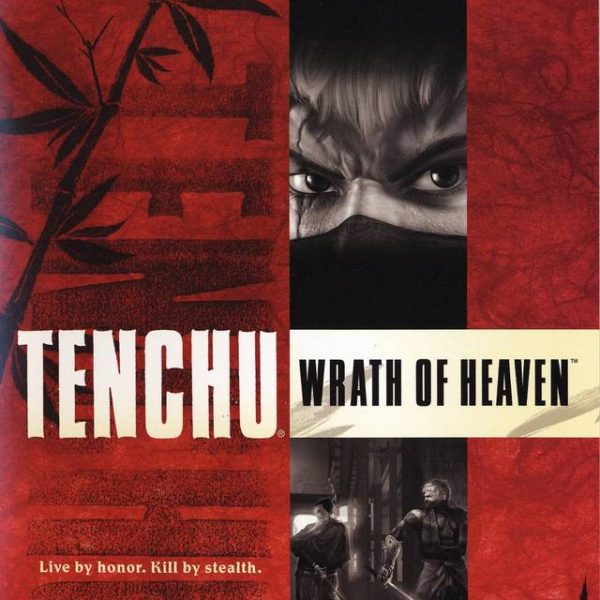 Author’s Note: This review was originally published on November 25th, 2003. Unfortunately, it was updated with “witty” taglines on November 5th, 2007. I feel like reviews that were updated years later lose some of their authenticity.

I remember seeing the first Tenchu at my friend’s house. It was really cool being all ninja like and stealthy. Not to mention, killing your foes with a one-hit stealth maneuver was awesome in every sense of the word. I always said, “When I want to grow up, I want to be a ninja.” Well, that will never happen. Luckily, playing Tenchu: Wrath of Heaven is the next best thing. Despite a few minor problems, I cannot get enough of this game.

The Return of Rikimaru!
After Rikimaru and Ayame defeated the evil warlord known as Mei-Oh, Rikimaru was lost in a mysterious portal. Thought to be dead, the Azuma ninja clan continued out their duties in his honor. However, Rikimaru came back when he sensed that Japan was in an uproar with the rising of a new warlord named Tenrai. Together with Ayame, they are on a mission to put a stop Tenrai as they encounter new foes, old foes, and great challenges. Who is Tenrai? Only through stealth and cunning can the truth about him be revealed.

The story is rather basic. However, you have two stories (Rikimaru and Ayame) plus a third character to unlock. Thus, you get many points of view with the same story. This is very cool. I also enjoyed how you get to learn about each unique character, despite the fact that I never got a chance to play the first or second Tenchu games the full way through. Ninja are cool people. Thus, this game has awesome characters. Rikimaru is absolutely fabulous when it comes to being a hero. The other characters are awesome as well, especially some of the enemies you face. My qualm is the fact there are too few characters. I wish there were a few more NPCs and maybe one more playable ninja. Overall, the story is average, but the multiple view points add plenty of thrills and excitement to it.

Sneaking. Slashing. Repeating.
The key to victory in Tenchu is stealth. Remain unseen, and you officially become a true ninja. Doing this will require to use everything you have, besides your ninja reflexes. First off, you have a countless amount of sub-items to take along with you. These include shurikens, poison needles, medicines, bombs, mist screens, hooks, and many others. By performing well on the missions, you can unlock powerful special items. These include an invisibility spell, a decoy whistle, and protective armor. Also, you can pick up items left by dead soldiers such as spears or bows and arrows.

When you are done dealing with your item selection, it is time to begin a mission. Moving around is made easy thanks to the analogue stick. The camera always stays behind you. You can zoom in when you’re in stealth mode in order to get a better view at your area; a very nice feature. Stealth mode is when you hide on buildings, or crouch under rocks. You can also crawl, roll, and jump without making a sound. This is what a true ninja is all about! The next great thing about the game play is the freedom you have. You can double jump, rebound off walls, and you can go on top of houses, castles, and buildings with your trusty grappling hook. The sky (literally) is the limit. This adds to the feeling that a ninja is all about stealth.

There are two ways to kill your foes. The best way is in the shadows using stealth. You will sneak up on your enemies, and hit the attack button when you get close enough. Depending on the direction you are facing him or her, you will perform one of many stylish stealth-kills. At the start of the game, a stealth-kill will make a blue kanji appear. These kanji fill up slots that lie above your health meter. When all of the slots are filled, you will learn a new technique. These techniques include a feign death attack, further vision, and the ability to cling onto a ceiling. This adds a great amount of excitement to the game play.

If you’ve been spotted by an enemy, then you engage in a melee fight where you have to use your agility and strength to over power your foes. You can block, side step, strafe, and use your sub-weapons, but your main weapon (sword for Rikimaru and double daggers for Ayame) is most effective. It all depends on timing and your ability to strike when necessary. It can actually get pretty challenging. This is why stealth is important. However, it is very important to also test your true combat skills because a lot of the special techniques you learn are for this type of combat. Finally, there are usually boss battles at the end of a mission. Since you are unable to stealth kill a boss, you need to rely on your fighting skills to get you through. Often times, the bosses can be quite a challenge.

There are a few bad things about the game play, unfortunately. First off, it can be difficult to land on certain locations, especially when you are using your grappling hook. Nearly 90 percent of the time, you will have a safe landing. The other 10 percent will have you falling down a pit. If you die in this game, you start at the beginning of a level. True, there are various secret routes to take, but it can get frustrating to fall down a pit and have to start over. Also, some of the enemies are very stupid. While they can be smart and react to you moving, most of them seriously take out the intelligence in AI.

A New Look at Ancient Japan.
The graphics, while much better than they were on the PS1, do need a bit of work. There can be times when there is a bit of slow down. The characters tend to look a little blocky at times. While it’s nothing too bad, it does take away from the realistic feeling of Tenchu. Not to mention that some of the enemies look ridiculous. The backgrounds are pretty bland as well. It does fit the setting of a dark era of Japan, but I’m a fan of color. The graphics do need a bit of work.

Flubbed on the Dubbed.
Tenchu has an excellent sound track. The oriental tunes mixed with some dark toned rhythms really add to the fun. There are many tracks in the game. There is fast paced boss music, and a VERY cool opening song that is sure to make all J-pop fan boys squeal with delight.

The voice acting, on the other hand, was ghastly. The voices themselves were fine, but the dubbing was awful. Luckily, you can skip over any cut scenes if you don’t feel like watching them. The voices fit the characters perfectly, but their mouths do not fit the words perfectly.

Again and Again!
There are a lot of things to unlock and many things to do in this game. You have various ways of completing levels, and at the end of each level you earn a ranking. If you want the highest rating possible, you will have to work for it. Finally, there is a two player mode. Bring over a friend and start killing! All in all, Tenchu: Wrath of Heaven is a keeper. I say buy this game. You can complete it in one rental, but you’ll want to play it again and again as you try various difficulty levels, new characters, and try to improve your stealth skills. Needless to say, I really enjoyed this game from beginning to end. Yes, I am biased that this game features ninja, and I am well aware of the flaws the game has. Still, fans of stealth-action and of the coolest assassins ever should check this game out.