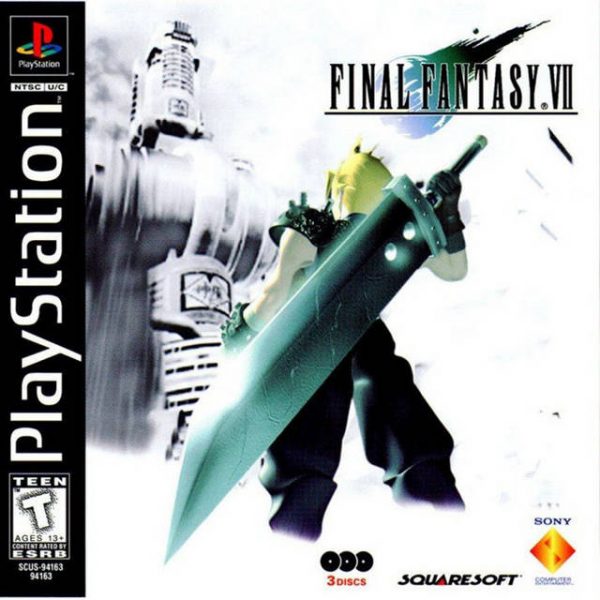 Can we just skip the cliches and get to it? We can? Cool. Welcome, my dear readers to another review by yours truly. Final Fantasy VII is a legendary game that began a renaissance of RPGs. Squaresoft was truly at their prime with this title and I’m super excited to finally review it. Chances are, you have seen and heard it all before, but the truth of the matter is that I am yet another fan of this wonderful game and I’m going to give it some more, well-deserved praise.

The game is about a tough-as-nails warrior who wields a massive sword the size of a Buick named Cloud Strife. Originally a member of Shinra’s elite group known as SOLDIER, Cloud now takes free-lance jobs to make a living. He gets a job with the renegade group called AVALANCHE. In the town of Midgard, Cloud meets up with the AVALANCHE leader, Barrett Wallace, to destroy an energy vacuum called a Mako Reactor. As long as these things keep running, the planet will slowly fade away. Cloud is out to stop Shinra, but he doesn’t realize how much he’s about to learn about himself and the meaning of true sorrow.

When I first played Final Fantasy VII years ago, I remember being engrossed by both the story and the characters. Cloud will meet beautiful women such as Aeris (or Aerith, whatever) Gainsborough and Tifa Lockheart, tough talking warriors like Cid Highwind and one of the most regarded villains in video game history. Indeed, I am talking about Sephiroth. You will really begin to care about these characters that live in a dank, decrepit world full of corruption. FFVII is also known to have one of the most heart-wrenching scenes to be in any form of media.

One thing that I like about FFVII is that it keeps many of the traditions found in earlier titles in the legendary franchise. Battles are random and you’ll fight with the ATB system that has been in the series since the whimsical and retro days of Final Fantasy IV. You can attack, defend, use items and attempt to run away. The thing that sets FFVII apart from the rest of the series is the Materia system. These little orbs contain magic and, when equipped to a character, will allow the wielders to use said magic. This opens up many options for customization, but Materia isn’t just used for magic. Sure, you can summon monsters and shoot lightning bolts, but the real fun comes with Materia that lets you steal, hit enemies four times, attack everyone on screen and/or perform instant death attacks. As you travel the world, new Materia will present itself to you. The downside to Materia is that it will leave you with a decreased amount of HP and attack power. Thus, balance is key. Another feature folks will continue to rave about in FFVII is the Limit Break system. As your party members get whacked, a meter will build up. Once full, you can unleash a mighty Limit Break instead of a regular attack. Again, as you continue to travel the world, you will learn new Limit Breaks. Battles might be random, but they never stop being fun.

A big part of that reason is due to the fantastic music. Not only does it give a nod to the steampunk, industrial setting of Final Fantasy VII, but there is a sensational fantasy aesthetic. Many of these songs continue to get remixed and conducted today. One Winged Angel is especially favored thanks to it featuring a full orchestra and opera. Furthermore, Final Fantasy VII is the first in the series to feature beautiful computer-graphic sequences that advance key story points. These are few and far between, but man are they pretty. The same can be said about the pre-rendered backgrounds that show off a variety of unique settings. Unfortunately, the same -CANNOT- be said about the character graphics. This is the one thing that will always annoy me about FFVII. I understand that these blocky babes and blokes have a retro look to them and, at the time, they were regarded as ahead of the curve. However, I never found them appealing. Granted, this is only true for outside of battle. In battle, the characters look much better as they fight with unique weapons and plenty of magic.

By now, everyone has at least heard of Final Fantasy VII. But, I’m sure there are some dedicated readers out there of mine (lawl) that were interested in my opinion on the matter. Well, there you have it. Despite the blocky characters, Final Fantasy VII is an epic game that will always be remembered. If you haven’t played it yet, remedy that right now so you can join the bandwagon and experience Squaresoft at their finest.