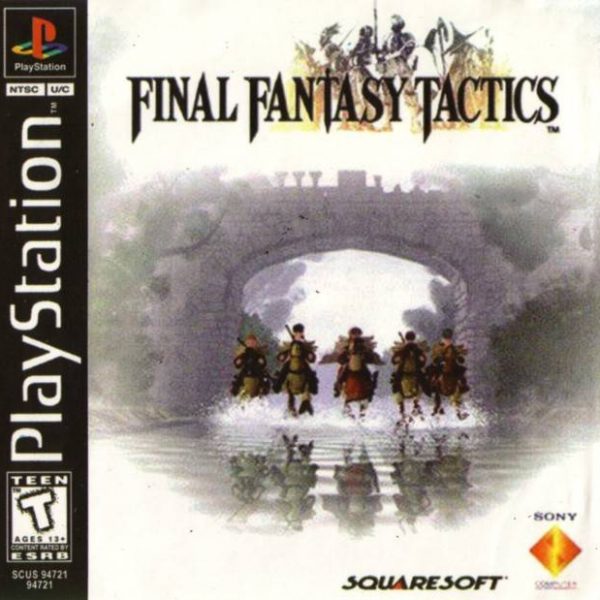 In 1998, RPG fans were likely following the adventures of Cloud and his friends as they attempted to put a stop to Sephiroth’s ambitions. However, not long after, Squaresoft released a different type of Final Fantasy that had the handiwork of Yasumi Matsumo of Ogre Battle fame. In lieu of an active time bar, players have isometric grids. In lieu of Materia, players get to explore jobs. In lieu of 3D polygons, players will view 2D sprites. Obviously, FF Tactics is an SRPG and a fantastic one, at that. Fans of the genre as well as newcommers will easily find something enjoyable from this title.

Final Fantasy Tactics has a story with so much history and depth; it would take way too long to describe all of the background information. In a nutshell, it stars Ramza Beoulve who lives in the world of Ivalice after The 50 Year War. A mercenary for hire from the established house of Beoulve, Ramza has been given the duty to protect Princess Ovelia from a band of rogues. After Ramza and his team fight off an assault, Princess Ovelia gets captured by Delita Heiral, a long-time friend of Ramza who was thought to be dead. Delita is alive, and Ramza soon gets swept up in a tale of intrigue and virtue, of legends and facts, and of good and evil.

While the introduction to the story sounds a bit unoriginal, the way it develops is excellent. FFT was written with the Dark Ages in mind. Swords, sorcery, legends and lore will all show up Ramza’s struggle. As mentioned, the introduction to the story might seem a bit clich&eacute;, but sticking with it will reveal a plot rich in intrigue. FFT also has a cast of exciting characters who join Ramza and a cast of devious villains who will fight against you. FFT is one of those rare games in which you loathe the ideals and values of some of the villains, and feel the pain of the protagonists. Things like that are what make FFT such an interesting tale. These characters and villains, plus the world they live in, help give FFT an excellent setting. The setting is further enhanced by the gorgeous visuals.

The look of Final Fantasy Tactics combines stunning battlefields, beautiful stills, and 2D sprites that move gracefully. The game is proof that 2D sprites are able to express emotions and feelings just as well as 3D characters. All of the spells, battlefields, towns, and weather effects give FFT that extra bit of polish that separates it from other SRPGs of the time. Like the graphical presentation, the sound track is a masterpiece. Hatoshi Sakimoto does not mess around when it comes to music and FFT’s soundtrack is the proof.

Aesthetically pleasing to the eyes and ears, folks might be wondering whether or not Final Fantasy Tactics is actually worth playing. Remember, this is an SRPG. Thus, progression is a bit different than a typical RPG. Players move Ramza from location to location on a large map of Ivalice. When moved to a red spot, the story advances and a battle with certain conditions ensues. When he is moved to a green spot, there is a chance of a random battle that has no relevance to the story. Finally, moving to a blue spot means he is as at a town. In town, players can shop for gear for the team, head to a warrior’s guild to find a new mercenary, or go to a bar to hear rumors. Also, going to a bar later in the game will allow Ramza and his crew to run errands. Doing these errands can grant huge bonuses in money and job points, and they also allow him to discover hidden treasures. The more successful at errand running, the higher his rating.

While on the world map, players have access to various menus. Besides having a full tutorial of the game’s mechanics, options, character profiles, and story events, players get to customize their party. Final Fantasy Tactics has an amazing job system. With over 15 jobs each with their own special abilities, it should be duly noted that mastering FFT will take many hours. For those who have played games like Final Fantasy III and Final Fantasy V, this system will seem familiar. The game begins with only two jobs: squire and chemist. As these (and other) jobs level up, new jobs will get unlocked. These include the monk, the knight, the black mage, the time mage, the thief, the ninja, the mathematician, and so much more. No matter the job, the fun never stops in customizing him or her with abilities learned from other jobs. The possibilities are endless.

The job system and all it has to offer may seem harrowing to newcomers. When this is added to the brave, faith, and zodiac systems, it becomes clear the FFT is not to be taken lightly. Level grinding will help those who are struggling with some of the mechanics, but true SRPG tacticians will use careful customization and planning. Similar to the job system, battles in Final Fantasy Tactics are long affairs that take time and patience. While Ramza will encounter random foes on the map, the real fun comes with story battles. Conditions for victory can be finishing off every enemy, saving someone, or knocking down a nasty boss.

Speed determines the order of turns. Unlike other SRPGs where there are player phases followed by enemy phases, Final Fantasy Tactics makes you pay attention to everything going on in the battle. When a character’s CT gauge reaches 100, it is their turn to act. The less stuff they do, the sooner their turn will come up again. Besides moving around the isometric battle field, units can attack, use the abilities of their current job, use the abilities equipped from a different job, and/or wait. Certain attacks like powerful spells and skills take time to charge. Potent attack spells and certain spells can hit allies and heal enemies, respectively. This is why it is important to master the CT gauge and move characters around accordingly. The same goes for weapons that attack from two squares away. When a character’s HP reaches zero, they are KO’d. However, after a certain amount of time, a character will turn into a treasure chest or a crystal. This means that the character has disappeared from battle.

With so much to do in the story, players will be glad to know that there are plenty of secrets to uncover in Final Fantasy Tactics. The total play time can range from 50 hours to 150 hours. Building the perfect party, finding hidden weapons, mastering extra dungeons and so much more can add upon hours of game time. That said, this is a meaty title not for the faint of heart. At times, the amount of terms and features thrown at a player can seem overwhelming. Still, this is a title that comes highly recommended to fans of strategy games as well as people interested in the genre. The bountiful game play features combined with a stunning presentation and a story that pulls no punches makes Final Fantasy Tactics a great game for the ages.