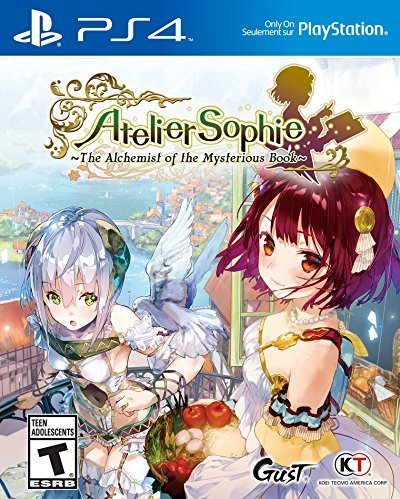 As of this writing, I am going to proudly say that Atelier is my favorite video game series of all time. Even with the slight hiccups with the original Atelier Rorona and Atelier Escha & Logy, this series has provided me with hours upon hours of entertainment since it first arrived to American shores in 2005 with Atelier Iris: Eternal Mana. The first game in the series for the PlayStation 4 has exceeded my expectations. Atelier Sophie: The Alchemist of the Mysterious Book is able to retain features that stay true to the Atelier series, while at the same time making over various aspects to keep up with modern RPGs. I recommend Atelier Sophie to everyone, but fans of the series will find the most enjoyment from it.

The series has made a solid transition from the PlayStation 3 to the PlayStation 4. The graphics are as stunning as I expected them to be: the stylish characters move well in imaginative environments. Some characters can have their outfits altered, which is a nice touch. My usual complaint about the lack of monster variety still stands, but there are some unique enemies you will face that make their debut. Some of the bosses are especially intimidating. In the sound department, Atelier Sophie delivers a great selection of music and excellent voice acting. As usual, you can select English of Japanese voice options. The Atelier series has always had a fantastic presentation and I’m glad to see this trend continue.

Atelier Sophie takes place in the quiet town of Kirchen Bell. This town is known for its massive church, a trendy cafe, and an assortment of shops. On the edge of town is an atelier ran by a girl named Sophie Neuenmuller. Ever since her grandmother’s passing, Sophie has been in charge of providing goods created through alchemy for the folks of Kirchen Bell. During a lazy afternoon, Sophie wrote down a recipe in a book. With a small flash of light, the book began to move and talk. It turns out the book used to be a person named Plachta. But, as these things usually go, Plachta can’t remember anything about her past. Sophie and her friends decide to help Plachta restore her lost memories and her humanity in an alchemy inspired adventured. Atelier Sophie is the fantastic start of a new set of games in the Atelier universe. The unique story of restoring a talking book’s memories through the use of alchemy blends both the classic RPG style of storytelling with Atelier’s trademark. It’s great watching Sophie transform from novice alchemist to a full-fledged expert while she helps not only Plachta, but the rest of her friends. The characters in Atelier Sophie are fantastic. There will be times advancing the story is the last thing on your mind because you will be too busy advancing each character’s unique side-story. You get to watch a prim and proper fencer begin her dream as a singer. You get to watch a retired fashionista remember why she started making clothes in the first place. The list goes on; getting to know each character is a treat.

Advancing the story in Atelier Sophie requires you to fulfill various tasks that inspire Sophie to think of new recipes. Once a new recipe has been written on Plachta, you will be given a new set of tasks. While it’s possible to rush to get to these, exploring and experimenting will help Sophie think of more recipes that don’t have anything to do with the story. Examining a fountain or a hill or a temple or a statue will give Sophie inspiration. Mixing traits or putting new effects on items will give Sophie inspiration. Fulfilling certain tasks in combat will give Sophie inspiration. All of this inspiration can be put to work when you partake in Atelier Sophie’s classic yet improved item creation system. After selecting an item to make, you will get to select a cauldron. Various cauldrons provide different effects. When it’s time to mix the ingredients together, you can increase their value by placing them in nodes. Brighter nodes indicate a higher increase in attributes. Once all of the items are in place, the item will be made. As Sophie’s alchemy level increases she can begin to add additional traits to the finished product. Combining various traits will yield more advanced and potent traits. Not that I could have been convinced otherwise, but the item creation in Atelier Sophie is a blast. You can spend hours trying to create a powerful bomb that decimates everything in its path, a healing item that will activate the moment a member of the party is attacked or some materials that will yield ultimate equipment. There is plenty of room for customization and experimentation in Atelier Sophie.

One thing you might notice during item creation, or general exploration in the town or a field, is that time is always moving. While there is no time limit in Atelier Sophie, time still plays an important part of the game. Various scenarios will only activate at night. Some characters move locations depending on the day. Other characters only appear during the weekends. When you gather materials, the monsters in that field will be more powerful at night. Furthermore, there will be times it rains. This could also impact your materials that you gather. Another factor that could change the materials you gather is a rumor. By paying for rumors, various fields will have new materials that can be temporarily gathered. Rumors will also allow you to battle special monsters.

Battles in Atelier Sophie appear simple during the start of the game. During your turn, you can have your characters enter an Attack Stance or a Defense Stance. You can perform the same actions depending on the stance. With the Attack Stance, characters will provide supporting attacks after their turn. With the Defense Stance, characters will attempt to guard another character from an enemy attack. Performing the above actions will steadily increase the Chain Gauge. As you get further into the game, characters will start to unlock unique supportive attack and defense attacks. When the Chain Gauge reaches 200%, the attack and defense support maneuvers will have more flash and provide more benefits. Later, you’ll unlock Special Attacks and Special Guards. These activate when the Chain Gauge is at 300% and can really turn the tide of battle. Atelier Sophie is slightly more challenging than other games in the series. While all characters are able to use some items, Sophie is the only one who has access to those that are most potent. Many of the bosses are able to get multiple turns, which can make a battle go from winnable to manageable. That said, the difficulty can adjusted at any time and the battles in Atelier Sophie are just as fun and rewarding as the item creation.

If I had to complain about one thing, it would be the length. Atelier Sophie is a short game that feels over too soon. This holds true if you decide to go for 100% trophy completion. While some of the secret bosses will really test your patience, and while there is a slightly higher challenge than most games in the series, Atelier Sophie can be finished anywhere between 20 to 30 hours. Despite this issue, I still recommend the game to RPG fans, Atelier fans, and those that fall somewhere in between. Atelier Sophie: The Alchemist of the Mysterious Book shows that the series made a successful move to the PlayStation 4 and I’m excited to see what comes next for my new, favorite franchise.

Overall, 9.5/10: Atelier Sophie: The Alchemist of the Mysterious Book is a fantastic RPG that retains the series’ classic features while making modern changes to debut on the PlayStation 4.