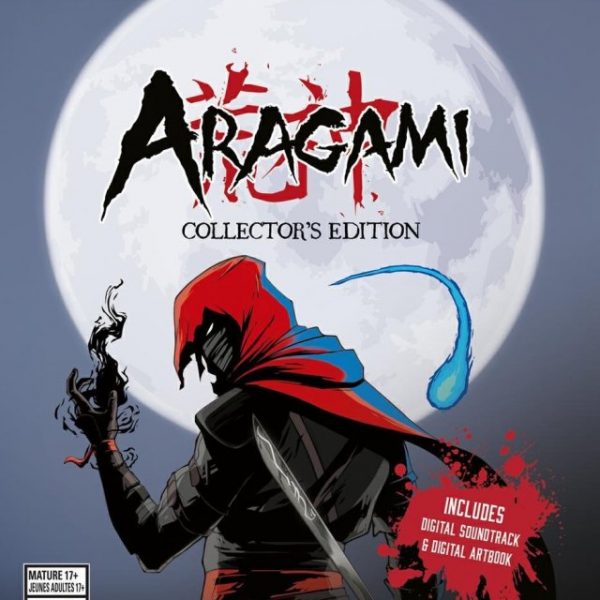 The Tenchu series has been a personal favorite of mine ever since Stealth Assassins sneaked its way on the original PlayStation back in the late 90’s. Instead of fighting cybernetic troops with flashy combos and magic, you took the role of a traditional ninja and stealthily creeped, stalked and hunted enemies that meant to do harm to Japan. It’s been far too long since the last Tenchu game. If you’re like me and going through withdrawals of bringing the wrath of heaven to enemies, then the Lince Works original Aragami will be just the fix for you. Thanks to Maximum Games, this title is now available on the PlayStation 4. Aragami is heavily inspired by the Tenchu series, but the unique game play and setting give it its own identity.

In a distant land, a bloody war was waged between the armies of light and darkness. In the aftermath, a woman named Yamiko ends up being trapped by Kaiho, the Army of Light. Yamiko uses the last of her powers to summon a vengeful shadow spirit called an aragami in order to release her from confinement in the city of Kyuryu. The summoning ritual works, and an Aragami arrives. With the power to control shadows, Aragami looks like the perfect killing tool. However, Aragami will slowly uncover the truth about his origins and why he was summoned back from the dead. Unlike the Tenchu series, Aragami takes place in a fictitious world that is full of sorcery and mysticism. The story has a slow start, and at times can be predictable. However, watching Aragami and Yamiko interact and exchange entertaining banter makes each new story segment worth watching.

However, the real fun with Aragami is the game play that relies on stealth, quick reflexes, and strategic planning. As an envoy from the dark abyss, Aragami is part ninja, part magician, and part nightmare. Guided by Yamiko and her familiar Kurosu, Aragami will need to traverse dangerous, enemy filled areas. All of these areas have bright lights produced by torches, campfires, or magic. However, the brightest light casts the darkest shadow; this is where Aragami’s abilities come into play. With the push of a button, Aragami is able to warp from shadow to shadow. It doesn’t matter where or the size: if there is a shadow, then Aragami can warp to it. Walking and running can make noise to alert enemies. Walking while crouching is quieter, but it’s not efficient. This is why it’s important to always stay in the shadows. Furthermore, bright lights will drain Aragami’s abilities of shadow warping.

Those that played Tenchu will enjoy using Aragami’s abilities to sneak behind an enemy and perform a stealth kill. There are plenty of enemies throughout the stages that are just begging to be killed with a quick strike of Aragami’s sword. However, the enemy AI is much more cunning than they look. The moment they think something is amiss they will alert the entire area. It’s important to think about other foes before landing a stealth kill. As you go through each stage, you can find hidden scrolls that will let Aragami learn useful abilities. This adds even more strategy and fun to his journey.

Aragami might look like an intimidating individual, but it only takes one hit from an enemy’s weapon to kill him. There are no restorative potions. There are no sub-weapons. Hell, Aragami can’t even jump or attack his enemies in the open. Aragami is a challenging game, but it’s that same challenge that will keep you coming back for more. Of course, some of the challenge comes from some technical issues. Certain stages have an inconsistent frame rate. Other times, enemies will get stuck in place. There will also be times when it’s not clear where the next goal lies. Still, these issues do not take away from the experience.

Despite the framerate issues, Aragami is a gorgeous game. The subtle use of colors contrasts the fantastic use of light and shadow. Aragami’s cape and cowl glow eerily, which adds to the atmosphere. Of course, watching him perform some brutal stealth kills never gets old, either. The music from Two Feathers is another highlight. Most of the oriental inspired tracks are both haunting and beautiful. During some of the intense boss battles, the music changes to reflect the sense of urgency.

Aragami doesn’t take long to finish. Despite getting struck down by the Kaiho more times than I care to admit, I was able to finish the game in about seven hours. However, those that wish to extend that playtime can challenge each level again to earn special medals, find any remaining scrolls, and perform a variety of special kills. The Tenchu series shows no signs of returning to gamers. However, games like Aragami can help fill that void. I am anxious to see what Lince Works does in the future; more games like this would be the perfect substitute for the Tenchu series.

Overall, 8/10: Light and shadow come together in a fantastic adventure. Aragami has classic stealth elements and original features to make it an experience worth playing.