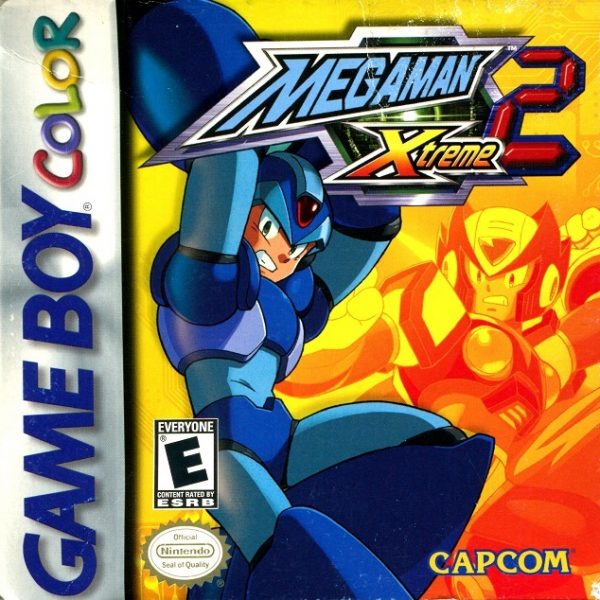 Mega Man Xtreme was a basic but fun little adventure. Due to the hardware limitations of the Game Boy Color, most of the game’s issues could be overlooked. That same level of leniency can be given to its sequel: Mega Man Xtreme 2. It feels like X and Zero take one dash forward and one dash backwards the further you get into the game. I still recommend it to people that enjoy the Mega Man X universe, but again, understand that the game’s home on the Game Boy Color causes some issues.

Mega Man Xtreme 2 takes place between the events of Mega Man X3 and Mega Man X4. X and Zero have been sent to investigate Laguz Island at the request of their friend, Iris. Laguz Island is normally a center for Reploids to perform research, but the Reploids have begun to stop functioning. Even worse, Mavericks that were supposedly defeated have started to reanimate. X and Zero need to get to the bottom of this incident. The story is familiar at times, but also has some originality. The new villains behind the scenes, Berkana and Gareth, have some interesting intentions that add a dark twist to the story.

Those that played Mega Man Xtreme will immediately recognize the similar style in Xtreme 2. When starting a new game, you can select to either play X Mode or Zero Mode. Obviously, each mode lets you take control of either X or Zero. Both heroes have to conquer four stages and their respective Mavericks, participate in differing final areas, and ultimately defeat either Gareth or Berkana. Once you finish the game as either X or Zero, you start again with the character that you didn’t pick. It’s fun to see the differences between X’s and Zero’s campaigns, even if they have already been seen in some capacity on the Super Nintendo. Playing as X will feel familiar. He can perform all of his usual tricks and find hidden power-ups. One questionable power-up is his X-Buster upgrade; it almost feels like a downgrade due to its operation. Zero is also able to find armor upgrades, too. His fighting style relies on close combat with his Z-Saber. Throughout the stage, you can find items that are used as currency to buy upgrades for both characters. Most of the time, the controls are tight. However, there are times when stages can get hectic and the controls have a hard time keeping up. There are also incidents of slowdown.

After finishing both X’s and Zero’s campaigns, you will unlock Xtreme Mode. You can select to play as either X or Zero; switching between the two as you like. You will also have access to all eight stages, bosses, and hidden secrets. Unfortunately, Xtreme Mode is where things take a questionable turn. X and Zero don’t share Heart Tanks. This unequal distribution can be problematic for the game’s more difficult boss fights. Furthermore, the acquired power from a defeated Maverick will only go to one of the heroes. In other words, if X defeats Flame Mammoth, then only X will receive his power. Zero will receive nothing. Some would say that it adds a level of strategy. In my opinion, it seems like poor planning. In every Mega Man X title that allowed you to swap between X and Zero, the two always shared boss powers. Heck, this continued when Axl entered the picture. I don’t see why Capcom made this bizarre decision. If you decide to finish Xtreme Mode, then you will unlock a Boss Rush Mode where you can fight a bevy of Mavericks.

The graphics and music in Xtreme 2 are the same as they were in the predecessor. The graphics look as expected on the Game Boy Color. X is blue, Zero is red, and the rest of the sprites have a designated color with varying tints. The story scenes look nice and have much more detail and some of the stages look expansive and greater variety. Hearing tinny versions of familiar tracks can get grating over time and cause you to turn the sound off completely. The sound effect didn’t fare much better. Again, all of this has to do with the Game Boy Color’s limits.

One thing worth mentioning is that Mega Man Xtreme 2 is a difficult game. Certain bosses are downright brutal, even if you discover their weak points. One boss worth mentioning that is bordering on unfair and broken is a Sphinx-like tank that covers half of the screen. Various stages contain plenty of instant-death traps that can catch you off guard. Due to the game’s checkpoint system, it’s frustrating receiving the game over screen and needing to restart a stage. I always welcome the challenge that comes with a Mega Man title, but there’s a limit. Despite all of the game overs I received, I was able to finish Mega Man Xtreme 2 in about seven hours. Fans of the first Xtreme will enjoy this. However, you’ll need to go into it with the same expectations because the new features have a tendency to get overshadowed by the game’s flaws.

Overall, 7/10: Mega Man Xtreme 2’s inclusion of Zero is welcoming. However, just like its predecessor, the game won’t recruit any new fans and it won’t feel as fulfilling as the other games in the series.