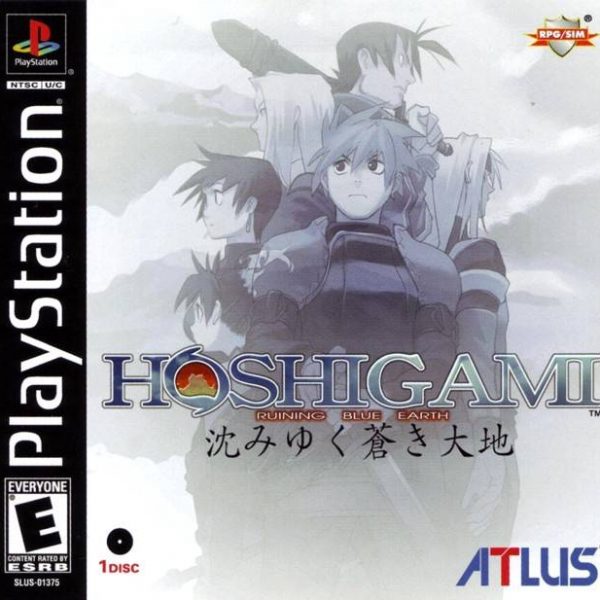 Author’s Note: This review was originally published on June 27th, 2002. This was the very first game review I ever wrote. While Hoshigami is a game not worth playing, I’m really grateful for it since it birthed my interest in writing reviews. It’s hard to believe that this game, long-gone to the annals of history, had such an impact on my life.

Hello all, this is my first review! I should mention that I did not complete this game.
Anyway, Hoshigami… Let’s see here: It’s a strategy RPG made by Atlus, the company known for many great games of the same genre. After I finished Final Fantasy Tactics, ::drool:: I think that I had very big expectations for Strategy RPGs. Well, here is my review and the reason I gave it this grade!

Gameplay: I will divide Gameplay into World Map and Combat.

World Map: As far as gameplay goes, Hoshigami has elements that are easy to get used to and elements not so easy to get used to. The menus are activated on the world map screen, and it is here you get some options depending on the location. In towns, you can buy weapons/armor/items and you can recruit some new NPC’s. New to tactical games is buying ”Confeigms” (the magic system) and going to Temples. When you buy a CF, you can then buy a seal and engrave it. Doing this will raise some of the coins attributes, and lower some of them, allowing plenty of customization. The elements are fire, earth, wind, force, water, and lightning. Also, you can buy Recovery CFs. I personally like learning magic, not buying it. This is one reason why I didn’t like this game too much. The other new thing is the Temples. In Hoshigami, every character worships a deity that represents one of the elements listed above. Once that characters DEV level goes up, they can learn new skills related to the deity. I was disappointed however, that all the skills were support type skills. While helpful, they didn’t have any fun attack skills. ( I would have loved to have seen a Fire Sword deal!)
When you are on a dungeon, the only not mentioned option is to enter a dungeon. The options that appear no matter where you may be, are the Organize menu, the Data menu and the Options menu. The menus are nothing special, so it’s onto the combat system.

Combat: You engage in battle after you enter dungeon a first time, or you revisit the place to train. Prior to battle, you choose the characters who you will use. Then, you will begin. The battles aren’t like most traditional ones, in that they aren’t player turn then enemy turn. When it is one of your team members’ turn, you can select what to do (move, attack, magic) and stuff like that. However, a new element added then takes the stage, the RAP Gauge. Doing actions expends an amount of RAP (Ready for Action Points). Once you run out of RAP, your turn is over and you select end. Depending on how much RAP you use depends on when you attack. So, you want to use as little as possible. The more you spend, the later you will attack. This greatly annoyed me, and caused battles to be amazingly long and boring. While I will give Atlus some credit for trying something new, I prefer to stick to the basics. Some may like this new feature. Anyway, after your turn, you choose to defend or session. Session is a new system that allows you to perform up to 7 hit combos on the enemy, provided you use perfect planning. In most battles, you will only use this when you are faced with one last enemy. The next annoying thing is the constant ”Are you sure you want to do this?” boxes. They appear after you do EVERYTHING, and there is no way to turn them off! One last thing I hated was leveling up. In many games, I really enjoy leveling up, but not this one. This is because it takes FOREVER to reach the next level. This wouldn’t be a problem if the battles were easy, but they aren’t. You see, ALL of the enemies will be the same level as the main character. This is just not fair, requiring you to level up ALL of your party members. Did I mention that once a character dies, it is gone for good?! Yup, no Revive spell at all. So once that mercenary you started to like dies, he or she is never coming back. To sum that complaining up, you will do plenty of training if you want to see the game’s end. Battles are what make an RPG what it is, and if they are terrible, then I feel the game isn’t worth my time. I don’t really feel that the battles are terrible, but they need tons of adjustment.

Story: The continent of Mardias has been divided into three countries due to the actions of King Sarnus. Our hero, Fazz is a mercenary, taking jobs with his friend Leimrey. However, Fazz gets more than he bargained for after an encounter with the Valaimian empire. I didn’t really get much more into the story as I said, but I feel there is a dark force behind the Valaimian Empire. I’m sure it becomes more elaborate. I really don’t know what more to say without spoiling it, but from my first impressions, the story was somewhat interesting. As I said however, I just couldn’t handle anymore battles without going insane so I gave the game up.

Graphics: Nothing a lot to say about them. They aren’t amazing, but they aren’t terrible either. They are cute anime-esque sprites. I do prefer this type of graphic more than the realistic type, so I really had no complaints. If you have played any other tactical games, you will recognize the similarities. The spell affects are semi-cool. There isn’t any amazing Final Fantasy spell affect, but they are still nice to watch. The towns and dungeons seem to vary. Some seem to have been quickly done, and others are beautiful and elaborate. The graphics were good in my opinion.

Music and Sound: Divided into the two listed categories.

Music: Unlike a game called Kartia (by Atlus as well) that had beautifully orchestrated music, the music is nothing to brag about at all. It is repetitive, and will probably not be stuck in your head at all. I personally didn’t find myself humming a long. The music won’t make you hit the MUTE button, but you may want to put in a CD if you happen to enjoy this game.

Sound: The sound of the game is average. Every slash, thrust, and hit is nothing special, but nothing repulsive either. There is really no sound that will get on your nerves. I was amused by the sound of a defeated soldier, because we all know that people sound like that after they bite the big one ^_^ Anyway, the sound is average.

Replay Value: I’m more than sure that there are plenty of secrets in the game, many of which are easy to miss. If you enjoy playing the game to it’s fullest, then the replay value is good. But do remember that the game is an RPG, and these are games that are usually not worth playing again because you know what’s going to happen to who, when it will happen, and most importantly, why it will happen! So I guess the replay value is pretty low.

Rent or Buy: I highly suggest renting the game to see if you like it. People who greatly enjoyed Final Fantasy Tactics and Tactics Ogre should definitely consider renting it. It may not live up to what you want. Only buy Hoshigami if you are positive that you have plenty of time to level up characters, and plenty of patience to last you a good long time.

I wasn’t a fan of this game. The whole game just didn’t appeal to me. It had some good points, but not enough to keep my interest. Hoshigami wasn’t for me, but it may be for you. If you just jumped up and down like a jack rabbit on a sugar high on hot Sahara desert sand because of what you read, than good luck on the game if you get it. I will stick to Final Fantasy Tactics.