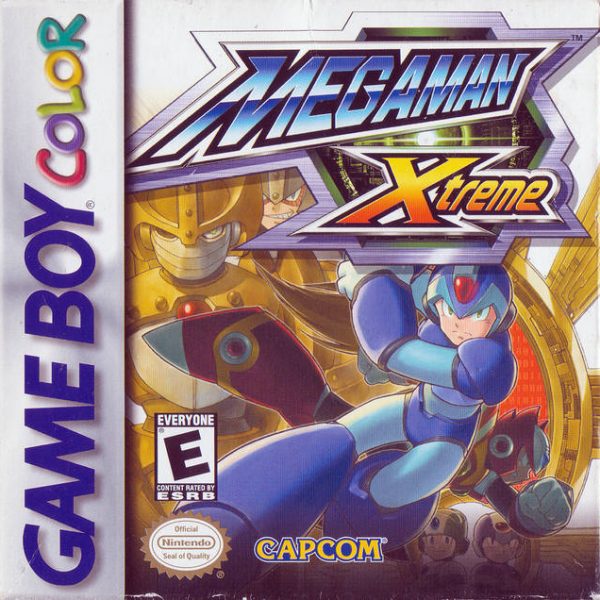 Mega Man X is a game that always brings back fantastic memories of my youth. Every day after school, I would try to play the game from start to finish. During breaks and weekends, I would spend hours on the game trying to improve my techniques and/or challenge myself with different ways of going through the game until the final showdown with Sigma. While it’s not my favorite Mega Man game, it -IS- one of the most important due to all of the aforementioned memories attached to it and the legacy it started. Recently, I was able to not only relive some of those memories, but start the creation of new ones. Mega Man Xtreme is an ambitious game for the Game Boy and Game Boy Color that will feel familiar to anyone that has played both Mega Man X and Mega Man X2. Due to the hardware, there are obvious restrictions in Mega Man Xtreme that make the experience not as impactful as one on the Super Nintendo. However, fans of Mega Man X should check out this enjoyable little title.

Mega Man Xtreme’s first moments will feel hauntingly familiar to everyone that played Mega Man X. Our hero in blue is running and gunning through a highway, feeling both a sense of nostalgia and dread. Eventually, he runs into Vile in a suit of Ride Armor. Luckily, X destroys him. After reconvening with Zero, X learns that the Mother Computer has been hacked by a group known as the Shadow Hunters. As a result of the hacking, Mavericks that are supposed to be scrap-metal are back with a vengeance. X and Zero join a computer genius named Middy to put a stop to the Shadow Hunters and reclaim the Mother Computer. This new story for the Mega Man X universe is a breath of fresh air. There are some mistranslations in the script and a few overly dramatic moments, but it’s a decent story that manages to work with the recycled stages and bosses while implementing new characters.

If you have any familiarity with Mega Man X and Mega Man X2, then your time with Mega Man Xtreme will feel like a diet version of those two games. Aside from the highway zone featured in Mega Man X, you will have to travel through the stages of Chill Penguin, Storm Eagle, Spark Mandrill, and Flame Stag when you start a new game. At the end of each stage is the designated Maverick that you need to defeat. Upon its defeat, you are rewarded with their power. Within each stage are enhancements for X’s armor, Heart Tanks that extend his life and Energy Tanks that need to be filled. The majority of the power ups are still in the same place they were in before. After you finish the last Maverick, you will head to Sigma’s stages and confront more familiar enemies and bosses. Finally, upon completing the game for the first time, you will have access to Hard Mode. Starting on Hard Mode lets you carry over all of your data and power ups from your previous game. This time, you will have to face Armored Armadillo, Morph Moth, Magna Centipede and Wheel Gator. Finishing them and Sigma will unlock Extreme Mode, which starts you over from the beginning with the ability to fight all eight Mavericks and go through all of Sigma’s final stages.

I’m not sure the purpose of having to play through two separate modes in order to “unlock” the full game. The story could have been told normally without the need of having multiple difficulty modes. Despite this odd choice, Mega Man Xtreme plays well. The controls aren’t as tight as they are on the Super Nintendo, but they are still easy to get used to and there is never a time you will find a challenge unfair. X remains as capable as always with his abilities to dash, charge the X-Buster, and climb walls. His body armor enhancement is especially potent because it drastically cuts down the amount of damage he takes. You are also able to summon Zero for a special attack at the cost of some of X’s life meter. All of this this combined with a very generous saving and checkpoint system make Mega Man Xtreme an easy title to finish. It’s still fun, but those that like the challenging nature from the Mega Man series will be in for an easy ride.

While playable on both the standard Game Boy and the Game Boy Color, Mega Man Xtreme looks best on the Game Boy Color. The sprites are well animated, show off a surprising amount of color, and feature some well-drawn stills that are used in some of the game’s cut scenes. All of the familiar friends and enemies made a good transition to the smaller screen. Unfortunately, the same cannot be said about the sound effects and the music. Obviously, there are limitations that come with the Game Boy and Game Boy Color. Thus, hearing tinny versions of familiar tracks from the Super Nintendo will likely cause you to turn the sound all the way down or put some other music on. They’re not awful; they’re just at the mercy of a portable system that can’t generate decent music. Most Mega Man games are known for their music, so this is an unfortunate but expected circumstance.

Even with its three modes of game play and some secrets to unlock such as the Hadoken, Mega Man Xtreme does not take long to finish. However, being a Mega Man title, it features fantastic replay value and can be easily played over and over. It may not share the same level of polish as Mega Man X or Mega Man X2, but it still has something for all fans of the Mega Man X universe.

Overall, 7/10: It won’t recruit new fans. It won’t be as fulfilling as X or X2. However, Mega Man Xtreme is an ambitious title that makes a good attempt to be at the same level of fun as its Super Nintendo counterparts.