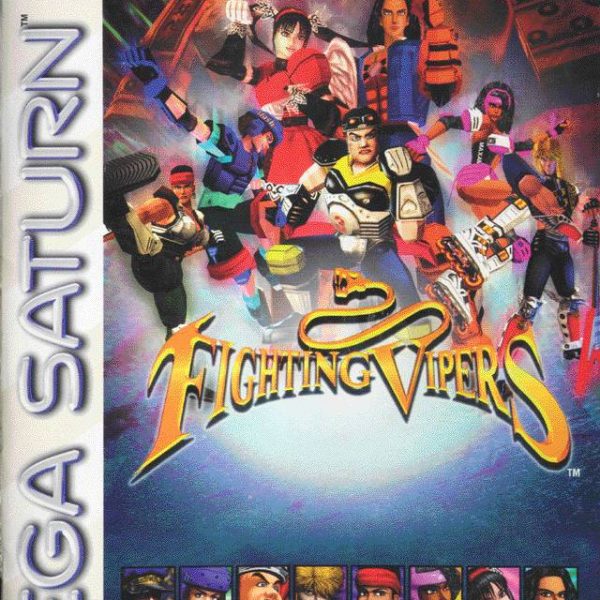 It’s been over 20 years since Fighting Vipers was released on the Sega Saturn. This was a fighting game I never heard of until I played Project X Zone. One of the support characters was Bahn, a muscular man that got as much screen time as the rest of the cast in a game that was filled with characters from across video game worlds. So, Fighting Vipers remained off of my radar, at least until now. I wasn’t expecting too much, but after going through the manual and reading its hilarious story and surprising amount of features, I grew more excited. And, when I finally started it and started slamming foes into walls or sending them sky high, I never stopped having fun. Fighting Vipers still holds up well to this day.

Fighting Vipers takes place in Armstone City. Fighters that participate in brawls out of the public eye have been termed Vipers by Armstone’s citizens. The mayor of Armstone City wants to hold a tournament specifically for Vipers. His intentions aren’t clear, but Vipers live for battle so this sounds like a great way to spend some time. Eight unique Vipers have signed up for the fun. The cast of Fighting Vipers is an entertaining crew. You have the lead singer of a thrash metal band, a skater boy, a fashion designer, and more. Each character has their own motivation for joining the tournament. Their stories don’t get fully fleshed out more than beyond the pages of the instruction manual, but it’s still a memorable crew.

Aside from Arcade Mode, you can play two-player Versus Mode, Team Attack Mode, and Training Mode. Similar to modern fighting titles, there is a playback option. Fighting Vipers plays similarly to Virtua Fighter. You won’t be mashing buttons in hopes of shooting a projectile. Instead, you’ll need to combine directions with punches, kicks, and throws to perform combos. Each character has a huge list of moves at their disposal. Some of them can only be used if the opponent is on the floor, against a wall, or in the air. Just like Virtua Fighter, button mashing isn’t going to earn you a victory. You need to be mindful of your inputs and understand when to use a punch or a kick. However, there are some interesting mechanics in Fighting Vipers that will also need to be taken into account.

The first is that each character’s outfit can be considered a suit of armor. As more damage is dealt to specific parts of the body, the more their armor breaks. This is indicated by the body silhouette at the top of the screen near the health meter. Green indicates that their armor is still in good shape. Yellow means that it has received some damage. Red means that it’s received heavy damage. Attacking parts of the body with weakened armor deals devastating damage. This armor mechanic adds a unique level of strategy to the familiar fighting formula. Another mechanic is the environment. Opponents can be slammed into (or, sometimes, through) walls to deal extra damage or open up follow-up combo opportunities. It’s important to learn when to close the gap towards an opponent. Camping in a corner can cause you to lose a match quickly. Overall, fighting in Fighting Vipers is great. The camera keeps up well with the action, each character has a unique set of moves and fighting styles, the computer’s difficulty can be adjusted to your liking, and there are plenty of options available. Sometimes, moving can feel slightly stiff. Also, I would have liked to have seen a few more characters in the roster. Eight characters, plus a few hidden characters, feels lacking.

Fighting Vipers still looks fantastic. Characters are well animated, move fluidly, and display some impressive, physics-defying moves. The battlefields are varied, but not as much as I would have liked for a game with such an eccentric cast. The music isn’t memorable, but the sound effects are. It’s very, very satisfying hearing the sound of your opponents getting slammed into walls and floors with bone breaking impact. The voice acting is fine, but hearing the result of a kick to the face that ends in an opponent soaring through a fence outshines it.

Like most fighting games, there are a few secrets to unlock outside of the standard modes. Beyond that, Fighting Vipers will last as long as you want due to multiple difficulty levels and the ability to play with a friend. Fighting Vipers has stood the test of time. It may lack the polish of more modern fighters, but it’s still a great title that fans of games like Tekken and Virtua Fighter will enjoy.

Overall, 7/10: Are you Viper enough to become the ultimate Fighting Viper? If your answer is a resounding yes, then check out Fighting Vipers.