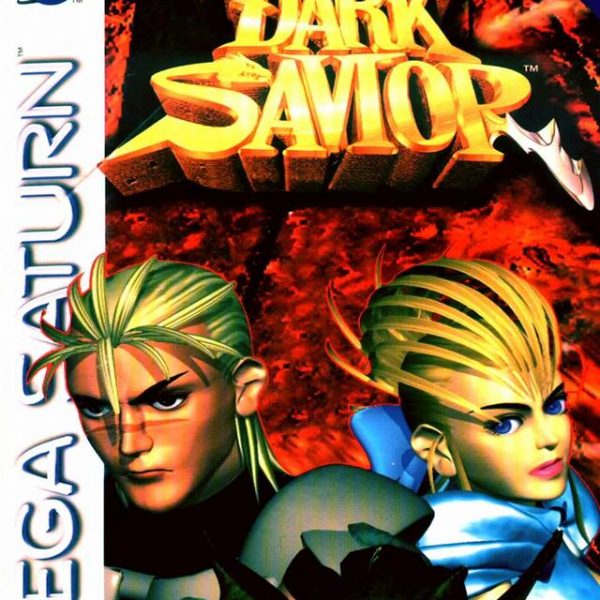 As I continue my seemingly never-ending journey to play as many Sega Saturn titles as possible, I continue to uncover games that completely missed my radar. Dark Savior is another example of such a game. It combines platforming, puzzle-solving, role-playing, one-on-one fighting, and parallel universe exploring. This bizarre concoction of genres seems like it could be a recipe for success or a recipe for disaster. Dark Savior falls somewhere between the two. There won’t be any gamers out there that will appreciate all that Dark Savior does. But, Dark Savior offered a different sort of adventure that had more depth than I expected.

Dark Savior stars a blond, brash and bold bounty hunter named Galian. His partner in crime is a blue bird-like creature named Jack. Galian and Jack are on board a ship that is transporting a monstrosity known as Bilan to Jailer’s Island. Bilan is pure evil, but Galian and Jack don’t mind. They live for danger and profit, so the idea of transporting such a fiend doesn’t phase them. As the ship sets sail, Galian has a strange dream in which Bilan has escaped his cage. After waking up to the ship’s alarms blaring, it turns out Bilan has escaped his confines and is wreaking havoc on the ship. Galian and Jack need to stop Bilan before the ship reaches its destination.

One of the interesting aspects of Dark Savior is how the story progresses after the initial sequences. The game will progress in a different way depending on how long you take reaching the captain’s chambers. The time it takes to reach this room will set the stage for one of the game’s various parallels. There are five different parallels to discover. As of this writing, I only witnessed the first one. The events in it were surprising. The developers at Climax created a bleak and depressing world. The lore behind Jailer’s Island, Bilan, some of the characters Galian meets, and Galian himself get some decent development for a game that can be finished in about five hours for the first time.

When Galian wakes from his dream, you will get a general idea of what to expect during the majority of your journey through Dark Savior. At a glance, the game is an isometric adventure in which you control Galian as he runs and jumps through various environments filled with hazards. Galian can pick up and/or break various objects in order to move to other areas. Some areas require him to flip switches, knock down pillars, or throw stones through hoops. It’s standard stuff; none of the puzzles will require a use of a guide. Most of the progression will rely on your skills with jumping on moving platforms. Again, it’s standard stuff. Galian’s running-jump covers a great distance, so you can not only cover a lot of ground quickly, but you can you usually make more risky jumps. Should you fall, Jack will pull you up at the cost of 20 Bounty Points.

Bounty Points are used as currency and as a measure of energy. If Galian runs out of Bounty Points, then it’s game over. Save points are scattered liberally throughout the game, so it’s only a minor setback if you do run out. Bounty Points can also be used to increase Galian’s hit points. Finally, you can use Bounty Points as money and purchase items from a red bird. The items you can acquire can be traded around Jailer’s Island for special tools for Galian. One item is chocolate. Interestingly, in Japan, there was no chocolate. Instead, Japan used cigarettes. I found it odd that the USA version of Dark Savior changed cigarettes, which are a much more realistic type of jail currency, to something so innocent.

You earn Bounty Points from battles. The battle system in Dark Savior is an odd one. Most battles are scripted, but the formula remains the same. You control Galian as he goes toe to toe with an opponent. Hitting the A button performs an attack. You can hold A to charge up a meter to unleash a special attack. Other attacks include a jump attack, a knockdown and a kick. Hitting the direction opposite your foe will let Galian block. Your opponents usually have the same arsenal. The most effective thing to do in battle is to simply mash A until you knock an opponent down, charge as much as you can, and then repeat the process until you can unleash your charged special. Sometimes, the words “Capture Chance” will appear over an enemy. This means you need to hold the A button once again and fill up your meter. If you do this in time, then you will capture the foe. Captured foes can be used to fight for Galian in his place. At the end of the battle, you’ll earn Bounty Points based on how well you performed.

Bounty Points can be used to skip battles entirely, too. If you have enough of them, you can skip the majority of the battles in Dark Savior. Battles feel so far removed from the rest of the game. Dark Savior would have worked well as a traditional platform adventure. I like this idea instead: enemies would appear on screen and get defeated via sword swings. As you get further in the game, Galian could acquire more powerful swords and gear. If you fall into a pit, you simply restart at the start of the section. Things like that would have made Dark Savior feel more cohesive. Instead, Dark Savior has its hands in so many different genres that don’t play as well as others. This is why I said it’d be difficult to find a gamer that appreciates everything Dark Savior does.

One thing I feel most will appreciate is the game’s presentation. Dark Savior is a great looking game. The isometric view works really well with the detailed, 2D sprites. Watching Galian, blond mullet and all, constantly knock down monsters twice his size is a fun sight to behold. Jailer’s Island has a lot personality. There are trash bars, seedy hotels, and some salty prisoners that will do anything for a bar of chocolate. The music is great. It’s got that Japanese anime, pop-rock sound that was popular during the decade. It doesn’t always fit with the goings-on, but it’s still a pleasant and catchy sound track. During some key moments of the game, there is some solid voice acting. It was a nice touch to a game that, otherwise, has standard sound effects.

Overall, 6.5/10: Dark Savior mixes many genres into a package that will leave fans of said genres wanting more.