Spectral Force 3 reminds gamers that not all franchises are worth localizing. 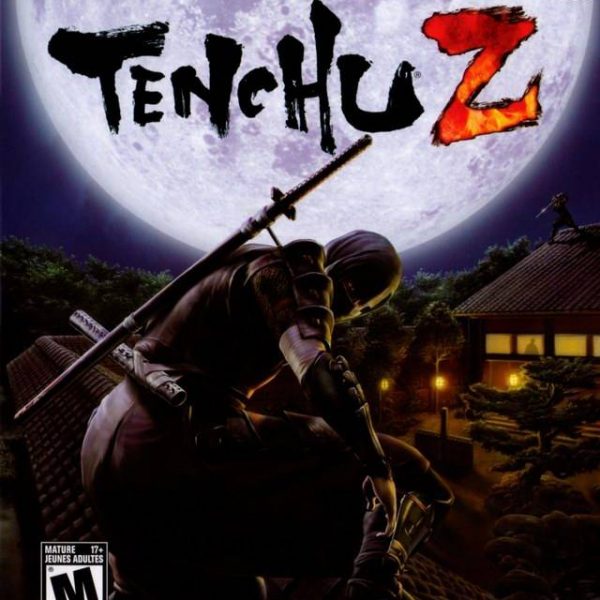 Author’s Note: This review was originally published on January 3rd, 2011. Like other reviews around the time, this one features “witty” taglines to separate each section.

Most people will agree that the Tenchu series has a very up and down reputation. Some games are great, others are not. The volatility of it all makes the quality of any new Tenchu game questionable but, fans keep coming back for more. So, with the first third generation console Tenchu called Tenchu Z, most people probably didn’t know what to expect. From my understanding, the “professional” reviewers disregard it but the true-blue Tenchu fans enjoy the heck out of it. I enjoyed the heck out of it, too. But, it’s hard for me to recommend unless you’ve been a long time fan of the series and you don’t mind some annoying game play issues.

D.A.R.E. to Keep a Ninja off Drugs?
In Feudal Japan, war is on the horizon due to a drug called shishi that causes soldiers to become battle hungry fiends. The Owagara tribe has been involved in this drug cartel for too long and it’s causing the people of Gohda to suffer. Lord Gohda now sends his shadow warriors, the Azuma Ninja, to stop the drug cartel and put an end to this war.

And that’s all she wrote, folks. Tenchu Z’s story is hardly anything to epic. Most Tenchu games lack a solid story, but Tenchu Z’s is a stretch. The worst part is that you don’t get to control your favorite characters from Tenchu’s past. Rikimaru acts as an advisor, and Ayame, Tesshu and Rin are nowhere to be seen. This was unfortunate, because Rikimaru was always one of my favorite characters in the Tenchu series. So, who is stopping the drug cartel? Well, at the start of the game, you create your own ninja. You pick their gender, their starting clothing, and their techniques. You can also adjust their life, strength, and speed. After you create your ninja avatar, you will create your partner. While he/she doesn’t assist you, he/she makes appearances during story events. Tenchu Z’s story needs plenty of work. Creating a ninja is fun, as is a story about an ancient drug cartel. Unfortunately, when classic elements go missing, the story feels nearly non-existent.

Must I Repeat Myself?!
Tenchu Z’s formula is very basic. After a tutorial on how to play the game, you’re taking to Rikimaru’s secret hide out. The hut allows you to buy clothing, techniques, and items. You can also dress your ninja in fun clothes, change their move sets, and equip items. The endless amount of customization was a real treat, especially considering the vast amount of stuff that gets available to you as you progress through the game. As fun as it is, it’s also expensive. You have to save, save, save that hard earned yen if you want to buy the coolest stuff. After you’re done adjusting your ninja, you will take a mission from Rikimaru. There are 50 missions in all, but the majority of them have absolutely no relevance to the story. The majority of the time, you will be assassinating some evil-doer. Other times you’ll get to collect items or save hostages. Story missions are a bit different. While some will have you assassinate a bad guy of the Owagara clan, others will have you perform reconnaissance or search and rescue. It sounds like the variety is there, but it’s not. It can get repetitive, but it can also be fun because there are a good selection of stages, various enemies, and hidden secrets.

Artificial Idiocy.
For those who played Tenchu: Wrath of Heaven or Tenchu: Fatal Shadows, you’ll easily pick up and play Tenchu Z. Your ninja will have to remain hidden from enemy sight, wait for an unsuspecting guard to meander by you, and then press the X button at just the right time to perform a stealth kill. Your ninja can perform all kinds of acrobatics, use tools to help them out, and stay hidden in the shadows by crouching or clinging to walls. The bottom of the screen shows an icon along with your health meter and visibility meter. If your icon is green, it means an enemy does not know you’re around. If you’re icon is sky blue, it means they’re on alert and are looking for you. If it’s yellow, it means they see you, but are unsure what they’re actually looking at. If the icon is purple, it means that they heard something. New to the game is the orange icon. If orange, the enemy can smell you. That’s right, enemies will be able to smell blood, excrement, and garbage on you. This means you have to watch where you step, otherwise you’ll be stinking to high heaven. Finally, if the icon is bright orange, it means they’ve acknowledged you as an enemy and are ready to engage in battle. Unlike other titles, your ninja is a very capable fighter. Still, the real fun in Tenchu Z is the multiple types of stealth kills available.

Depending on the direction you’re facing and/or whether or not your sword is drawn, the variety of stealth kills adds some much needed variety to the game. The more stealth kills you get, the better you perform on the missions. With the proper button timing, you can get a Total Stealth Kill. TSKs are worth more than regular stealth kills. After you off an enemy, you can pick up the body, set it down somewhere, or throw it out of sight. All of this sounds fun, and it is, but there is one huge flaw: enemies are absolute idiots. They were never geniuses in earlier titles, but it seems like their capabilities got a downgrade in Tenchu Z. If they spot a dead body, they’ll be on high alert for a few seconds, but then go back to their route. I figured, for an Xbox 360 game, they would summon help or run away. Due to the enemy stupidity, most of the time you can kill an enemy and not worry about covering your tracks. In fact, there have been instances when I stealth killed an enemy while another was looking directly at me! I mean, come on! Your buddy is getting a sword across his neck and you’re just looking at me like I might be suspicious?

Despite this major issue, the game still is a blast to play. Stealth kills never grow old, and it’s just as fun to grapple hook up to a roof top, observe the enemies below, and plan a new course of action. New to the game are new items never before seen in Tenchu, the ability to stealth kill enemies on ledges and through doors, and a variety of foes to fight in case you do get spotted. You can also play on-line with your friends in co-op missions. The missions are repetitive, but stealth killing as a ninja never grows old. This is why Tenchu Z will only appeal to long time fans of the franchise.

Jumbled Japan.
For an Xbox 360 game, Tenchu Z is in need of serious work. Sure, it can play in high definition, but most of the graphical bugs were not worked out. Clothing will look as though it’s going through other pieces of clothing or through the ground, and you’ll also notice that someone inside a building can cast a shadow through the floor onto the ground below. Some of the character’s faces look a bit silly, too. I’m not sure if they were going for a realistic look or not, but it’s clear that the ugly stick was somewhere in development. The level designs, however, are lovely. Caves, buildings, houses, temples, a harbor, and more will be the stage for your missions. While some get used a bit too frequently, it never gets old jumping rooftop to rooftop. The music and voice acting shines, as well. Sure, characters don’t move their lips when they speak, but it can be easily over looked thanks to the variety of ancient Japanese tunes and the Japanese voiced script.

For Fans Only.
Completing the 50 missions will take gamers about 10 hours, but the game has much to offer after the credits roll. There are tons of items, clothes, and techniques to buy, as well as multiple difficulty levels. I’ll be the first to admit that Tenchu Z is far from perfect. Not only do the enemies do ridiculous things at times, the story and repetitive design need plenty of adjustment. Still, stealth killing, outfitting your ninja in cool clothes, and exploring creative levels in feudal Japan is just as fun as ever. The odd thing about Tenchu Z is that it follows a formula seen in most other games in the franchise. Other games were just as repetitive, yet Tenchu Z has received a bunch of flack for it. My guess as to why “professional” reviewers gave it such low scores? They aren’t fans of Tenchu. Thus, you should only play this game if you like stealth/action games set in feudal Japan and have followed the series since it’s debut on the Playstation. It might be upsetting to know that Rikimaru and Ayame are no longer the central characters, but pulling an enemy into a bush and snapping his neck like a twig will make you forget all about that.