Home is where the heart is, and where the dismembered arm is, and the decapitated head is.

Spectral Force 3 reminds gamers that not all franchises are worth localizing. 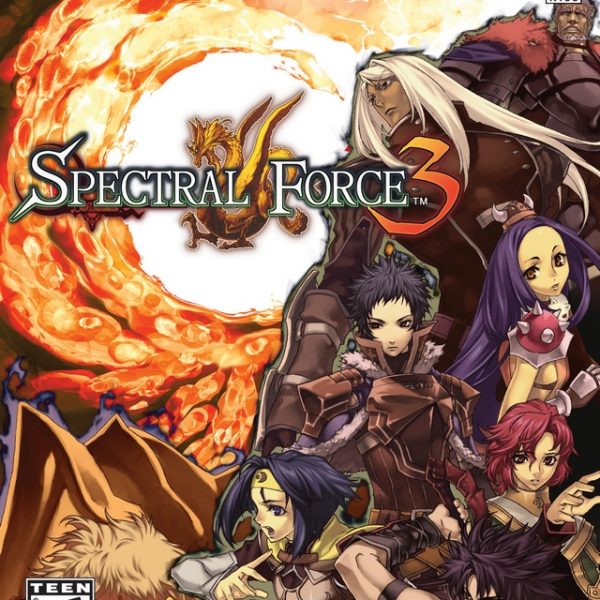 Author’s Note: This review was originally published on September 25th, 2008. Like other reviews of the time, it features “witty” taglines that separate each section. I remember purchasing this game for the purpose of holding out until Tales of Vesperia arrived. That was a mistake.

When I purchased my beloved PS2, I picked up Ephemeral Fantasia along with it. This underrated RPG got awful reviews, however I was able to look past them and enjoy the adventure from start to finish. I was hoping history would repeat itself when I bought my Xbox 360. Along with the console, I bought Spectral Force 3; an Idea Factory produced SRPG that was getting mediocre reviews. I can easily say that history did not repeat itself, and that calling the game mediocre would be generous. Spectral Force 3 looked to have the potential to be a ground-breaking SRPG, but ended up being awful.

Off To Never-Never Land.
In Neverland, war has been raging since anyone can remember. Nations are fighting nations in hopes of conquering the entire world, but none have been successful. As a result of the constant quarrels, mercenaries make a living for those who will pay the highest. One band of mercenaries, the Norius Mercenaries, is no different. This rag tag crew is led by Begina, a strong-willed warrior who wishes to see the end of war. With his friends, Begina will strive to set Neverland free.

A war story in an SRPG is fine, but it is not fine when there is absolutely no character or plot development. The above paragraph describes the majority of the plot. Sure, there is a story about a young boy who could hold the key to “everything”, but most of the time you will be watching nations fight each other and get nothing resolved in the end. The most annoying thing is that Begina and has friends change very little through the course of the game. While the cast of characters is quite vast and does not consist of hired, nameless mercenaries, your team develops little. In the end, you are left with a story that leaves much to be desired, mainly because there is no story to talk about.

Dreamcast Days.
Similar to the lack of story, the graphics leave much to be desired. The battlefields, while full of breakable objects, are bland. The same can be said about the monsters and characters. While the anime portraits are beautiful, their representations on the 3D battlefield look too blocky for a 360 game. I was never one to judge a game solely on graphics, but the 360 could have easily been pushed further. Even worse is that the text, especially in the menus, is hard to read. The menus also have a tendency to get cluttered, which can get annoying when you are trying to buy or make equipment. Overall, the graphics were disappointing for a 360 game, and could have made the entire game much, much better.

The Sound Bytes.
Even more of disappointment comes with the sound department. My first gripe has to deal with how, instead of using regular sound effects, they used people to play the monsters. Literally, you hear a guy going, “Bzzz!” when you are looking at a monster bee! I mean, come on! The regular voice acting is not much better. While some characters sound believable, others do not. At least the music was decent. It was not epic, the way it should have been in an SRPG, but it was good enough. The opening J-Pop song was a nice touch.

Chrono Crossing The Line.
To be perfectly honest, none of the above features, aside from the lack of character development, would have bothered me had the game been fun. Unfortunately, the game is far from fun. I briefly mentioned that the words in the menu screens were difficult to read, and this is true for dialogue boxes. Conversations are voiced, but the text generates slowly. If you decide press the A button before the text displays fully, you might end up causing the game to freeze. This is utterly unacceptable for a 360 game. You can chose to skip the entire conversation sequence with the Start button, but you may miss an important piece of “story” information.

After the event, you are most likely taken to your base camp menu. Here, you can outfit your characters with skills and items. The more powerful the stuff, the more CP it will cost. Thus, you have to be careful with how you balance your team. This was one of the more fun aspects of Spectral Force 3. Making the perfect character with a bevy of items proved rewarding, but at the same time, it was expensive. Money turns out to be a huge problem in this game. And boy, will you need money. The best equipment costs not only money, but raw materials as well, similar to how it was in Chrono Cross. The idea works if money for materials is not an issue, but if it is, the idea is a pain. When your team is finished getting prepped and ready, you can converse with your teammates to see how they feel about the situation at hand. Finally, you can chose to go on a request to earn a reward, you can decide to proceed with the game and go on a story mission.

Regardless of the choice you make, you will be in battle before you know it. After choosing your six participants, you will begin. The turn order is at the top of the screen. Also, you will see your party’s morale. High morale means better performance. The bottom of the screen has two gauges. The first is the Friendship Gauge, which fills up with each attack. The second is the Rage Meter, which fills up with attacks via the Friendship Gauge. I will get to the finer details of these momentarily. Once you see your battle conditions, the battle can begin.

You are always required to have Begina and his best friend, Diaz, in at all times. Begina performs like most warriors in this game. They attack with a style similar to that seen in Chrono Cross. Weak attacks are more likely to hit than medium attacks, which are more likely to hit than strong attacks. With each successful blow, the hit rate of each attack gets higher. Your character can do as many attacks as possible until his or her action bar depletes. The more powerful the blow, the more the bar diminishes. Most of the characters have their own special skill, too. Diaz, on the other hand, acts differently. He has the ability to heal without the cost of magic points, but cannot heal himself. Also, he is vital in creating Geo Portals. These add positive effects to those who stand on them. But, since he is so weak, often times you will need your warriors to protect Diaz. Needless to say, he can be quite annoying to deal with.

As mentioned, you have two gauges to aid you. With the Friendship Gauge, you can perform team attacks, or even give someone an extra turn. This can be very helpful when it comes to finishing off a foe. When successful with the FG, the Rage Meter builds and builds and allows you to eventually perform a devastating team combo. To be honest, these concepts all sounded good on paper. However, the execution was flawed. Enemies not only have a tendency to overpower your team by number, they have a tendency to overpower you with strength and speed. Seeing as battle conditions can change at the drop of a hat makes things even more aggravating. Any SRPG player knows that this is a challenging genre, but there are times when things seem brokenly unfair. It gets to a point where you are just hoping the enemy does not kill your healer and that you can get enough points to build up the Rage Meter and finish everything off. That is not strategy; that is silly game design. It is not a matter of skill, either. I have played very challenging games and have come out on top. In the end, skill level does not matter in SF3. You have to rely on your luck, and how long your defenses can withstand damage.

Plus A Minus.
Finishing the game grants you a New Game Plus. However, all you get is the ability to recruit new characters and some other little touches. This makes the game hardly worth playing a second time. Then again, with all the crap that the game has in it, the game is hardly worth playing a first time. This is a real shame because SRPGs are usually exciting for me. But, where was the story? Where was the character development? Why the hell was the game such a hassle to play? These questions and more plagued my mind through this 40 hour game. Thus, I say to you, do not pick it up. Paying for this game at full price was a huge mistake. Playing the game was an even greater mistake. Learn something from this review and do not do the same things I did. Spectral Force 3 appeared to have unlimited potential, but the final result is a mess that should not be played.