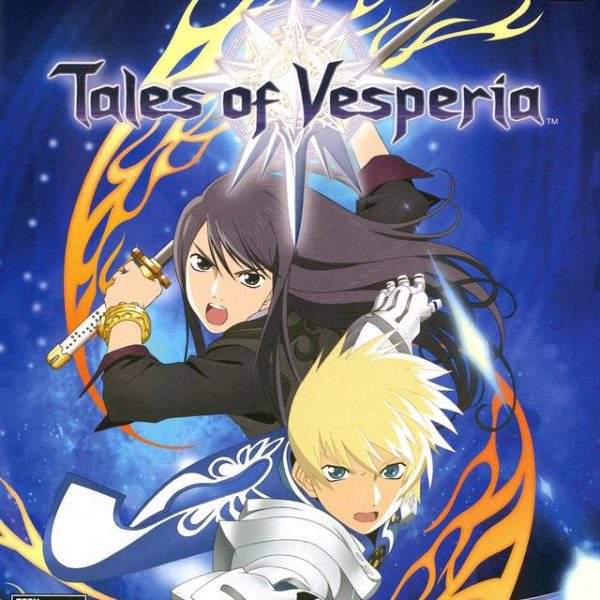 Author’s Note: This review was originally published on February 6th, 2009. Like other reviews of the time, it features “witty” taglines that designate each section. Since the launch of the site in 2018, the definitive version of Tales of Vesperia has been announced for Switch, PS4, Xbone, and PC.

If you think it is silly for someone to buy a new console just for the sake of one game, then you are delusional. Shelling out the money for both a game and a console may seem crazy, but for a devoted Tales fan like myself, I was not about to miss a chance to play the latest American released Tales. Besides, the Xbox 360 is a great system. The Tales series is a great series. Makes sense, yes? Anyways, that aside, let us talk about Tales of Vesperia. This excellent game is worthy of the Tales name and brings new features to the series. Those looking for a great RPG should look no further than Tales of Vesperia.

“Tell Me How I’m Supposed To Breathe With No Aer.”
In the world of Terca Lumireis, the power source called aer drives the force of blastia, the legacy of an ancient civilization. The powers from blastia have caused much strife in the world, but in the right hands, this technology has allowed people to live safe lives in the world’s various cities. One of these cities is the Imperial Kingdom of Zaphias. It is here that Yuri Lowell, once a knight, lives in Zaphias’ lower quarters. After the citizens in the lower quarter lose their blastia, Yuri sets off to look for it. He soon meets a young girl with the mysterious power to heal. This encounter is going to take Yuri and a variety of other people on a quest of epic proportions.

With a new Tales title comes an all new cast with amazing characters, both heroes and villains. While the storyline in Tales of Vesperia is a bit over the top, it is the characters in the story that make the game stand out. For a protagonist, Yuri is far more mature than past Tales characters and the story has darker components to it than past Tales. Yuri has ambition, charisma, and goals. The rest of his friends have their own unique traits. While one character, Karol, gets annoying after a while, the rest of the cast develops well over the course of the game in a classic Tales fashion. Once again, skits can be played to help flesh out the characters more and give more insight to the story. Unlike the chore they were in Tales of the Abyss, these skits were fully voiced.

Anime-zing Graphics.
The Xbox 360 is capable of showing gorgeous graphics, and Tales of Vesperia is no exception to the rule. However, the graphics are different type of gorgeous. Instead of full, 3D polygons, you get crisp, anime models that make you feel as though you are watching an animated film. Taking a minute to watch them in action both in and out of battle proves that Tales of Vesperia is able to compete on the graphical level with 3D polygons. Not only do the characters look nice, but the environments look amazing, too. Water is always flowing, trees are constantly moving in the wind, and stars twinkle in the night sky. For those who enjoy artwork by Tales artist Kosuke Fujishima, there are plenty of animated cut scenes.

Voices of Vesperia.
Anyone who has played a Tales title knows that the music is good. Again, Tales of Vesperia is no exception. Motoi Sakuraba makes a triumphant return for the next-gen Tales, giving us some excellent tracks for the towns, dungeons, events, and battles. The sounds in the game are spot on, and the voice acting is some of the best I have heard in quite a while. Many of the events are voiced, and all of the skits are voiced, so kudos to the game for having a good cast of voice actors. I really have little else to say about this because by this point in the series’ life, excellent audio is a part of the package.

Tours And Tournaments.
Like the graphics and audio, fun exploration is an important part of the Tales package. In Tales of Vesperia, the towns are some of the biggest in the series. There are tons of locals to talk to, many of which say different things depending on the current state of Terca Lumireis. The cooking system returns again, and you can find the Wonder Chef to teach you various recipes. With enough cooking practice, certain dishes will change and new recipes will be learned. Most of the towns have some form of mini-game for you to play, too. Once again, the battle arena returns to provide players with a difficult, but rewarding, challenge. Yes, there are cameo battles in Tales of Vesperia, but you have to play through the tournament to find out! Finally, all of the menus are easy to navigate whether you are shopping for goods or equipping your characters. Speaking of the shops, there is an awesome synthesis system that lets you make new equipment with monster parts. You will often times need to get the best equipment because some of the battles are quite difficult.

Packed With Action.
Tales of Vesperia has a battle system that improves upon the battle system seen in Tales of the Abyss. You control one character while the semi-inept AI controls the remaining three. You can free-run at the start of the game, meaning you can move in 360 degree fashion. Unlike Tales of the Abyss, the free-run will not let you decimate your foes. This time, you have to plan when it is better to free-run, guard, magic guard, back dash, or side step. Besides your evasive maneuvers, you can attack with your characters. In Tales of Vesperia, the battles take your attacks to the next level.

Besides a three-hit combo, followed by a base arte, and then followed by an arcane arte, there are tons of new things to do. First, we have the skill system. Each piece of equipment comes with one or multiple skills attached. Similar to the ability system in Final Fantasy IX, you permanently learn the skills after a certain number of battles. However, you can only equip so many. The next new feature is the over-limit gauge. Remember in Tales of the Abyss how each character had their own OL gauge? There is only one, shared gauge in Tales of Vesperia. This makes it so you have your favorite character enter OL mode. When you enter this mode, you can execute any equipped arte in rapid succession. With the right button press, you can execute a burst arte. These powerful moves are usually enough to clobber any random enemy. Near a certain point in the game, you will be able to execute mystic artes (Hi-Ougis) while in OL mode. Another new feature is the fatal strike. Each enemy has three regions, high, level, and low. By performing attacks that concentrate on a specific region, a colored icon will appear on the enemy. With the right button press, you will perform a fatal strike that instantly kills non-boss enemies and severely injures boss enemies. With practice, you can perform a fatal strike chain that leads to great rewards after the battle. My favorite feature was the altered arte system. When certain skills are equipped, an arte will change into a new arte. After using the altered arte enough, it will be permanently added to the characters ability set.

When the battle ends, you will get items, experience, and GRADE. In boss battles, you can unlock secret missions that earn you Xbox Achievement Points. The key to getting these is trial and error, but the items earned are usually worth it. Good thing, too, because this has to be the most difficult Tales title to date. While the normal encounters are a piece of cake, the boss battles will typically give you a run for your money. Some of them tower over you, making it difficult to find their weak spot. Others are quick, making them difficult to hit. Despite this fact, the challenge was a welcome. With the right team, skills, and equipment, a foe can be taken down. I warn those who played Tales of the Abyss to not expect the same level of ease when taking down a mighty boss, though.

As difficult as the battles may seem, the battle system as a whole is fun. Tales of Vesperia completely improved upon Tales of the Abyss. Each character has their own unique set of special artes and seeing everything that they can do is a treat. While the AI can be a bit annoying at times (seriously guys, you need to RUN AWAY from the giant explosion) they can be tweaked to do almost everything you want them to do. The signature battle system is back and better than ever in Tales of Vesperia.

One Disc. One Hundred Hours.
It is hard to believe, but the perfectionist can spend over 100 hours on this game. The main story itself will take about 40 hours to finish. The mini-games will tack on much, much more time. You can earn titles for you characters, outfit them with accessories, and so much more. Accomplishing everything will, obviously, take some time. Not only that, but to experience all that Tales of Vesperia has to offer, you need to play the game multiple times. Luckily, the GRADE shop has returned and the New Game Plus will allow you to enjoy the story all over again.

Reason Number One.
I picked up my Xbox 360 well before the release of Tales of Vesperia. Despite me playing some fun games, none have yet to compare to the latest title in my favorite series. As I said, that was the reason why I picked up the 360. With great characters, fun battles, gorgeous visuals, and a great sound track, Tales of Vesperia is worthy to be a part of the Tales franchise. It may be difficult at times, but those who enjoy good games will accept the presented challenge. People may find it hard to believe that I bought a new console just for one game. Play Tales of Vesperia to see why I made one the best purchases, ever.