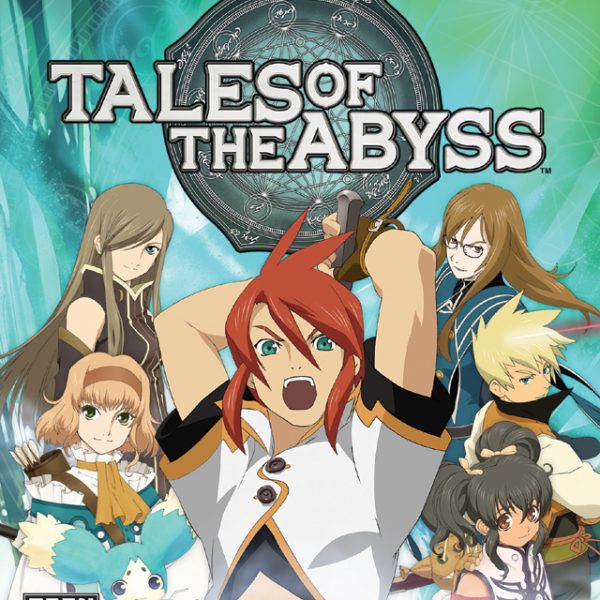 Author’s Note: This review was originally published on December 26th, 2006.

Finally, Tales fans in the USA got hold of this fantastic game for the PS2. After the rather off-key feeling Tales of Legendia, I was ready to experience some more Tales. Luckily, I was able to! Tales of the Abyss is a fantastic game.

The story of TotA stars the young duke heir Luke fon Fabre. After an accident, he lost his memory due to the shock of it happening, and since then has been living in his royal mansion. Never does he set foot outside the mansion walls, for his parents think he is at risk of being kidnapped again. While he is safe inside the town of Kimlasca, he is growing up to be spoiled, stubborn, and a total brat. While he was training with his sword one day, he hears a mysterious song that puts all of the people around him to sleep. A young woman attempts to kill Luke’s master, Van, but Luke parries her blow and the two of them get whisked away to a place miles away from the city. Luke has much to learn about the world he lives in, and what it means to actually live in the world.

The story is amazing. I loved every aspect of it. You’ll watch as Luke turns from spoiled brat to a fine, young man as the story progresses. Staying true to the Tales formula, there is a cast of amazing characters for you to get to know, and you can see their stories and histories with the story progressing. Also, this is the first game I played in which I hated the main character at first, but started to feel for him near the end of the game. Villains are devious, and the NPCs are some of the best I’ve ever seen in an RPG.

Actually, most of the story is fully-voiced. The voice acting is good, however, if you are a fast reader like me, you’ll end up interrupting what they say and moving onto the next person saying something. The other sounds were spot on, but the main highlight for your ears was the fantastic music. Nearly all of the tracks are worth a listen, thus this is an OST no Tales fan should be without. The opening song, Karma, happens to be my favorite Tales opener in the history of Tales.

The world of Tales of the Abyss not only sounds great, but looks great as well. The 3D environments, while a bit bland in some areas, are gorgeous for the most part. The details added to certain areas really look great. However, I think the characters are the best part of the graphics. Kosuke Fujishima delivered again. Characters will often show detailed expressions during the story sequences, and the camera does a great job of capturing these moments. Of course, there are anime sequences tossed in throughout the story. While I would’ve loved to have seen more, the amount they put in is more than I’ve ever seen in previous Tales titles.

Since they went above and beyond with everything else in the game, it only makes sense that the game play department is above and beyond as well. My only complaint is the loading times, mainly in the world map. They are really ugly. When entering a new area, it takes about three seconds for the screen to load. However, on the over world map, it can take nearly ten to fifteen seconds! But, that’s probably the most noticeable flaw of the entire game.

Like most RPGs, you can shop around and chat with the townsfolk. If you’re looking for something to do outside the story, TotA has a lot to offer in this department, too. You can find recipes for cooking, there is a battle arena, each character has titles to earn, and you can find mini-games everywhere you look. While navigating through the world map is total pain in the rear due to the terrible loading times and the graphical glitches, everything else about the game plays smoothly.

This is especially true for the battles. If you played Tales of Symphonia, you’ll feel right at home. This game uses real-time battles, per usual. However, instead of being limited to moving left and right, your character now has the ability to free-run in all eight directions. Your default character is Luke, and your party is controlled by the AI. In battles, creating combos with an endless chain of attacks is the key to victory. You can do your basic attacks, follow it with a base arte, and then finish it off with an arcane arte. During this time, your teammates are casting magic or using their own unique skills on the enemy party. As characters level up, they learn unique skills. What I really liked about this game is that the characters were all very well balanced. Jade may have the most powerful attack magic in the game, but he is also a supreme fighter. Natalia wields a bow amazingly, but also has healing and support magic. Also, this game features the very nice AD skills. These are similar to Ex Spheres, however in TotA, your characters get many, many different AD skills, instead of just being limited to four. Furthermore, skills can be boosted by equipping items called Fon Slot Chambers, or FSCs. These precious items have various effects on the many skills, so experimentation is the key to success. In this installment, you can perform high powered special attacks that can decimate all foes in range by entering Overdrive Mode. While this mode was available in ToS, you had no control over when to activate it. In TotA, you can enter it with a push of a button. The battles have so much to offer, and when you are able to uncover all of that goodness, you will wonder why more RPGs aren’t like this.

The key feature of the battles that sticks out is the Field of Fonon feature. When your team or an enemy uses an elemental skill, it will form a circular region with an icon representing that element above it. The more wide-spread the attack, the bigger the circumference of the circle. The circle will be white in color, and it will not have any role in the battle. However, if another skill is used on that circle of the same element, then the circle will change colors to that element. So, if two wind skills are used in the same area, the circle, now called a Field of Fonons, will be green in color. If one of your characters casts a spell or activates an arte in that circle, it may go from one skill to entirely different, and much more powerful display of strength! For example, Luke’s Fang Blade will become Lightning Tiger Blade in a green FOF. Natalia’s Revive becomes Angels Breath in a yellow FOF. As you can see, the FOF feature adds an entire new feature to the Tales series, and a whole new level of strategy to the battles.

I experimented so much with the battles and the FOFs, it’s no wonder the game took me so long to finish! The game is long, taking about 50 hours to complete. Did you want side-quests and optional bosses with that? Well, tack on about 20-30 more hours. What’s that? You want replay value? Well, TotA has that, too! After you finish the game, you are shown the Grade Shop where you can use battle points to buy bonuses for your next play session. Needless to say, this is game that you should buy. Even as a new release, this game has a decent price. Ten years ago, Namco showed off their creation of Tales of Phantasia. I knew after playing it, that the series would only get better with time. Of course, I was right! Tales of the Abyss is a fantastic RPG experience. It does have some load time issues, but everything else about makes it worth playing.