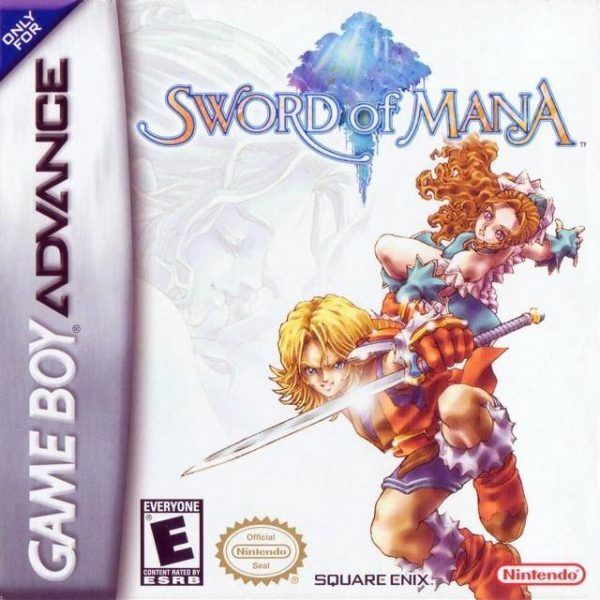 This review was originally published on January 1st, 2004. I received this game as a Christmas gift and played it from start to finish mere hours after opening it. Today, it’s clear that the game hasn’t aged well, but I still think it’s worth a quick try.

Sword of Mana is a remake of Final Fantasy Adventure. This was the first game in the Mana series. The remake for the GBA is wonderful because it still follows the same storyline and quest of the characters, but now there is so much more to do, another playable character and great new graphics.

Story: 7/10
Years ago, a divine goddess transformed herself into the Mana Tree to watch over the world and preserve the world’s energy. People soon forgot about her and took Mana for granted. An evil man named Vandole found a large source of Mana and used it to begin a dark era. Some brave youths stepped forth and one used a holy blade to destroy Vandole. Peace was restored, but people forgot about Mana again. Now, an evil man called the Dark Lord has been hunting down believers in Mana. Two youths are about to embark on a quest to save their world from the Dark Lord. One is a young man who wishes to avenge the death of his parents by the Dark Lord. The other is a female who is a Mana Clan member who is trying to escape Dark Lord’s grasp.

The story is good and light-hearted, but predictable. The dialogue spoken can be quite humorous at times, but also cheesy in that the characters say things that are quite bizarre, and sometimes unnecessary. Although you learn more and more about them, you’ll get tired of their endless bantering at times. One fun aspect of the story is that you may recognize some elements from previous Mana games. It’s an average story, but it will keep you playing until the very end.

Gameplay: 9/10
Around the towns, there is quite a number of things to do. You can shop, stay at the inn, and also temper your weapons and armor with raw materials at the blacksmith. While tempering weapons and armor is fun, it gets annoying when the stats are raised only a few points. You’re probably better off leveling up. The many NPC’s in the towns may have little quests for you to do. Obviously, completing this quest will earn you a reward of sorts. While they aren’t anything deep or time consuming, they’re still fun. One great aspect of the game is the Hot House. This is a house where you can grow fruits and vegetables (for tempering) and have Watts temper your weapons in his private smithy. The best part of the Hot House is Lil’ Cactus. By talking to him, he’ll scribble down your quests in his journal. This is quite entertaining because his entries all rhyme. It’s like poetry in motion! The Hot House adds a lot of fun to the game when you’re not fighting.

Battles: 10/10
This is an action/RPG, so you’ll be encountering enemies in real time. Basically, you press A to attack with your weapon. Some weapons like the Sword and Knucks can perform three hit combos. Each weapon has an attribute: jab, slash, or bash. The countless enemies all have a weakness to a certain attribute, so you’ll be switching every now and then. While switching weapons may sound cumbersome, it is made simple with the Ring Command Menus. For those who have played Secret of Mana, you’ll feel right at home. Items, magic, stats, etc. are all examined and/or used via the quick and easy rings. The magic system is easy. You equip a spirit (each with two spells) and use R button to summon it. By tapping R, you’ll use the support magic and by holding R, you’ll release attack magic. Each spirit has different effects on the enemies, and the spells have different ranges depending on which weapon you have equipped. This is a lot of fun because you can experiment with your favorite combination. My one complaint about the battle system is how stupid the AI for your NPC can be. All they do is waste magic or just wander around like an idiot. You can adjust their settings, but it really makes no difference. It’s no biggie though because your main character is usually more than enough to tackle the foes. One fun thing is that everytime you level up, you can upgrade a certain stat. If you upgrade the right combination, you’ll get a class up. This means that there is a nearly limitless amount of possibilities for your character’s class. The fast action makes leveling up easy. Overall, it’s a lot of fun to kick the crap out of your enemies.

Graphics: 10/10
These are awesome. The character sprites are vividly colored with a touch of anime to them. They all have fluid motions that give them a bit more life. The environments are very lush and colorful. There is a day to night shift in the game. Seeing the various places light up at night or have a light green hue at dawn is quite impressive for a GBA game. The monsters are very unique as well, especially the bosses. Great graphics overall.

Music and Sound: 8/10
The tunes are quite catchy. For once, you won’t have to turn your volume down. They can get repetitive, but it’s no big deal because you’ll hardly notice it. The music is very fitting for each setting, and the main theme is especially nice. It’s nothing like an orchestrated masterpiece, but it’s still good. The sounds can get annoying, at times. The spoken dialogue has this beeping sound that you can’t turn off. It doesn’t annoy me, but it may annoy some.

Replay Value: 9/10
You choose to play as the guy or the girl at the beginning of the game. Each story is different, so this is the piece de resistance of the replay value. Also, you can experiment with different classes to see what bonuses each one gives. I’ll be playing this again, and others will most likely do the same.

Difficulty: Easy
This game is a great way to acquaint people to the action/RPG type of games. The monsters aren’t difficult, and the gameplay is simple. However, any veteran RPG player will feel right at home with the great amount of customization for the characters, and using the Hot House for all it’s worth.

Buy or Rent: Buy
This is a great game, so I suggest buying it. One rental isn’t enough to complete it fully.

Sword of Mana is a wonderful game. It’s a great way to see the origins of the Seiken Densetsu series. It’s also a great action RPG. Squaresoft has taken an old story and created a new legend.