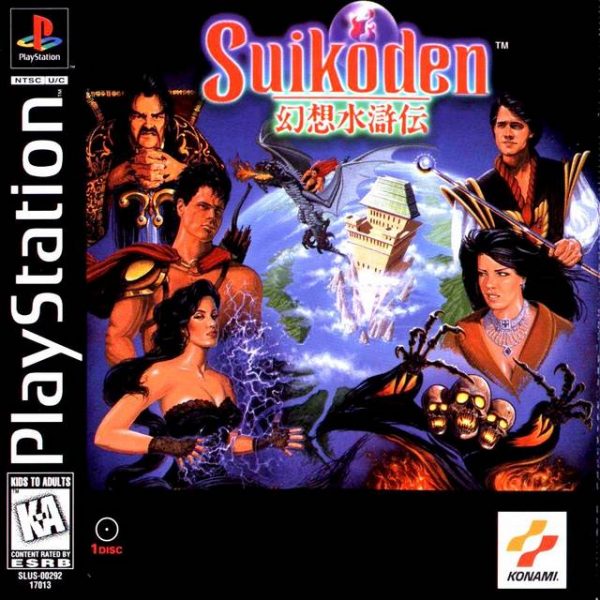 During the Playstation era, a game was released in 1996 that catered to RPG fans. The game was Suikoden, and it offered gamers a chance to recruit 108 characters and overthrow a diabolical empire. When I first tried it years after its release, I was far from impressed. Where were the flashy spells? Where were the anime cut scenes? Where were the well-written characters? Thoughts like that and others made me stop prematurely and, as a result of that and Suikodens III, IV and Tierkreis (sp), I have been of the belief that this was not the series for me. I’m not sure what compelled me to even consider going back to the first game again. However, I’m glad I did. The original Suikoden has aged better than expected and promises to provide an experience better than III, IV and Tierkreis (sp) combined.

The story of Suikoden surrounds the Scarlet Moon Empire. Once a prolific and well-respected dynasty lead by Barbarossa, the Scarlet Moon Empire has sent one of its five Imperial Generals to perform reconnaissance in the north. The general is none other than Teo McDohl. His son is played by you. As you and some of your friends begin training under the empire, odd things begin to happen. Talks of corruption have arisen and people are not sure who to trust. In an epic tale of good versus evil, father versus son, and friend versus friend, war is on the rise and only you will be the one to see if the Scarlet Moon Empire is as noble as they seem on the outside. Suikoden’s story might have a few typos and odd word choices, but the overall script reads well and provides you with incentive keep going. There are a few twists that will catch you off guard, and there are some very serious undertones in it about the tragedies and realities of warfare. The lives of 108 characters are in your hands as you attempt to get to the bottom of the empire’s secrets.

This leads me to the characters. With 108 Stars of Destiny to find, there is no doubt that some of them are going to get little to no development. I know that is going to be the case, so I deal. The characters that do get screen time are a mixed bag. The hero will be joined by beautiful women, manly knights, flashy aristocrats, carefree fishermen, mysterious ninja, and cranky scientists. I really enjoyed seeing Cleo, Gen, Kamandol, Sonya, Flik, Milia, and Valeria just to name a few. However, one of Suikoden’s negatives is that you are often times forced into taking certain characters along during the story events. For a good chunk of this 20 hour game, you are forced to take along the hero’s butler, Gremio. Gremio is blue-raspberry gum on the bottom of your shoe. Gremio is the screaming toddler sitting behind you on a four hour airplane ride. Gremio is the housefly that will not stay still long enough for you to squash it. He’s awful, and you are required to bring him and other annoying ignoramuses along during various parts of the journey. You can have six people in a party, but in reality, you are only able to bring three or four because your slots are filled by people you’re forced to be with.

Despite Gremio’s stupid face and despite other characters being jammed into your party against your will, the variety of characters lets you build a party suited to your liking. All characters that can participate in battle have a weapon that can be strengthened at a blacksmith and each character can hold up to eight items, which includes equipped armor. Some characters can equip Runes which allow them to use special skills or magic. Your hero and a few others, however, are forced into holding their own special Runes. You get to use these Runes, weapons, and armor in battle. The most common type of battle is the typical random encounter. The turn-based battle system is classic and most battles are over within seconds. Thanks to the Free Will command, you can just sit back and watch your team go head to head with the enemy party. For bosses, you will need to use a bit more care. Characters can attack, defend, use magic, use items and even perform team attacks if the right characters are together. There are two other types of battles. The first is the one-on-one duel that plays like an intense version of rock-paper-scissors. The second is the major battle in which your army goes against an enemy army. While similar aspects of RPS come into play, there are other options at your disposal to see you through to victory. The different types of battles keeps the game from becoming too redundant and are always welcome. There’s more to Suikoden than just battle, of course. As you grow your army, your castle will grow along with it. You will be able to participate in mini-games, customize the look and sound of your game, and listen to music. By the time you are close to the end of the journey, you will have a massive fortress that will make the empire tremble in fear.

Graphically, Suikoden is a dream. While there aren’t any special cut scenes or flashy animations, the graphics feature 2D sprite gloriousness. At a first glance, you might think that the game would have been released on the Super Nintendo. Watch a few of the spell animations and watch as the sprites do more than just walk around and you will see that the Playstation is where Suikoden belongs. Alongside the swell presentation is classic anime art for each character. Despite the game being released in the middle of the 1990s, the art looks like it came from the middle of the 1980s. In a word, it’s perfection and I wish more of it was available. Unfortunately, the music didn’t get as much care. A few songs are fine, but the majority of the soundtrack is underwhelming. Aside from the ending theme, there are no voices found anywhere in Suikoden. This didn’t bother me because most voiced games on the Playstation had a tendency to be terrible.