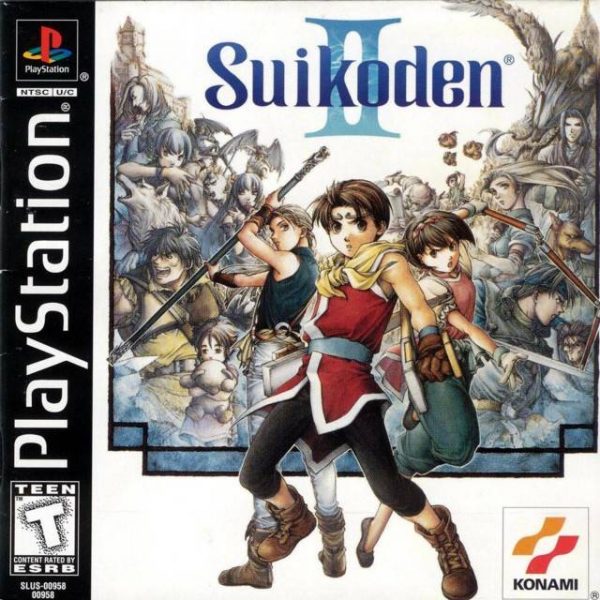 Before its re-release onto the PlayStation Network, Suikoden II has always been one of the most cherished RPGs due to its rarity. So, you can imagine my surprise when I was told that I won a free copy of it from a local game store that held a contest. Owning Suikoden II has an aesthetically nice look to it, but there are plenty of rare games out there that aren’t very fun. I couldn’t help but wonder: would this be the case for Suikoden II? After enjoying the first Suikoden, I was eager to find out and dive into the next installment of this RPG franchise. I was surprised in multiple ways by the end result.

Suikoden II takes place years after the events of the Scarlet Moon Empire and McDohl the hero stopped some nasty forces from taking over the continent. Now, a new set of heroes has to answer the call of adventure. The hero, that you name yourself, and his best friend, Jowy Atreides, are members of the Highland Army’s youth brigade. During an invasion, only the hero and Jowy end up making it out of the ordeal alive. It turns out that the prince of Highland planned this event in order to invade the town of Jowston. The new hero and Jowy realize that they are nothing but pawns in a much bigger plot. Jowy promises revenge, but the hero ends up with a much bigger destiny. Friends and foes will come together in unique ways and the truth about one of the 27 True Runes, the Rune of Beginnings, will finally come to light.

As the back of the game box describes, get ready to experience an epic tale of warfare, magic, friendship and betrayal. Suikoden II’s story starts off with a bang and the momentum continues as you get further and further to the truth. The new hero is great. Since Suikoden II is about twice as long as the first game, you will get to see more of him and see his capabilities as a leader. Old friends from the first game, a bunch of new friends and all kinds of personalities will end up joining you as you attempt to find the 108 Stars of Destiny and build your headquarters out of the ruins of an old city. Of course, this means that a bunch of characters will not get the development necessary to make them memorable. While this isn’t a big problem in the long run, Suikoden II suffers from some boring filler and often times forces you to take certain characters with you. Instead of having a party of six people of your choice, you are usually limited to four because the game will force you to take certain characters with you.

That said, it’s clear from the start that Suikoden II received more care than the first game. While exploration and battles have remained unchanged, little things in Suikoden II make it stand out. For instance, we now have a run button. Sorry, Stallion! Your services are no longer needed! There are more Runes to experiment with. There are more mini-games and multiple choices to make that can affect the ending. There is just -MORE- in Suikoden II. Of course, the fact that there is more means that there are more things wrong with it. Sure there is a longer narrative, but with it comes typos and odd translations. The run button is great, but there are obstacles everywhere, making it difficult to run on a direct path. The biggest problem is the castle: it’s way too big. As you recruit more characters, it will continue to expand and its poor layout makes it easy to get lost.

Luckily, you won’t get lost on the world map. There are plenty of places to explore and, of course, you will be in a variety of dungeons. Where there are dungeons, there are battles. If you played the original Suikoden, there is nothing new to teach you about the regular battles. They are the exact same, but you now have new combination attacks, new spells and new characters to check out. One-on-one duels have returned as well, but there are only a handful of them. Finally, there are the Massive Battles. These are, in a word, terrible. At first, these look like they would be fun because you can organize your characters into squads and then fight across the countryside in something that looks like it came from Final Fantasy Tactics. However, 90% of the battles have you do nothing but wait a few turns until some story event occurs. Even if you need to destroy an enemy unit, doing so is boring. These Massive Battles are poorly constructed, bottom line. They were fine in the first Suikoden and I question the changes they made in Suikoden II.

One of the weirdest things about the Massive Battles is that they rarely have any music playing. This is a shame, because Suikoden II has some great tunes. Some are from the first game and some are new. The downside to this is that the music that plays in your castle aka where you will spend most of your time is irritating. The graphics in Suikoden II look the same, too. However, that’s only at first. The sprites are more animated and have more personality. That, coupled with some very impressive spells and some unique enemies makes for one of the better looking 2D games I have played. If you do decide to play this title, I highly recommend equipping someone with the Blue Gate Rune so you can watch some of the coolest spell animations in the genre.

Like I mentioned earlier, Suikoden II is about twice as long as the first game. This time includes recruiting all of the Stars of Destiny and earning the best ending. For those that want more bang for their buck, there are plenty of items to collect, secret characters to recruit, hidden cameos, and other things to extend the play time. If you have save data from the first Suikoden, you can load it into your Suikoden II file for some additional content and extra bonuses. It may not be much for those who spent hours in the first title, but it does add a nice touch. Personally, I was ready for the game to be finished before the final battle. To me, Suikoden II overstayed its welcome. When you look at both it and the first Suikoden side by side, nearly everyone will agree that Suikoden II is more refined and filled with more content. That said, I actually prefer the first game more than the second. Still, I’m glad that I finally had the chance to sit down with this once-elusive-but-now-more-readily-available title. A charming hero, an intriguing plot and some new faces helped create a solid RPG experience. It has a chunk of flaws, but I will still recommend it to the folks that enjoyed the first Suikoden and for those who wish to experience a coveted piece of RPG history. Thanks to the PlayStation store finally having a digital copy of it available, you don’t have to worry about paying an expensive fee to sit down and play it.