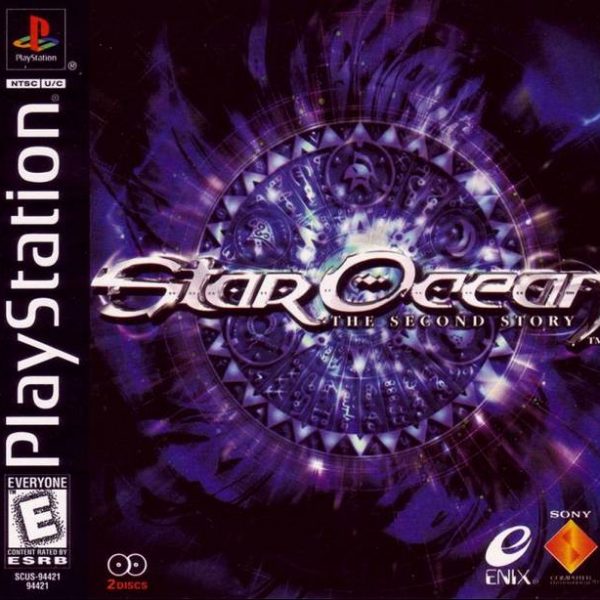 Author’s Note: This review was originally published on January 28th, 2004. Once again, I’ll spare your time. Don’t read this review. The game is absolutely worth playing. I remember writing this review after getting into a petty argument with a Star Ocean fan. I figured a review would show him. I actually replayed The Second Story in 2017. At some point, I’ll revamp this review with a proper critique.

Alright, so before Square, in all of their wisdom, decided to merge with Enix and become one big collaboration, Enix’s published games were either hit or miss. The only game I think of playing start to finish and enjoying was Illusion of Gaia. Well, after I saw the commercial for this game on TV, I decided to pass up on it. Then, my brother got it. I then played a bit of it, I enjoyed it for the most part, but overall this game seriously needed tons of work done on it.

Story: 4/10
Ugh…such a bland story. It was poorly translated too. Anyway, at the start of the game you choose from one of two lead characters: Claude or Rena. Claude is the son of a famous general named Ronixis, and Rena is a young girl from a quiet village. Now, both stories do have little differences between them such as character interaction, who goes where, and other minor instances. But in the end, they follow the same quest and see all of the same people. And quite frankly, that is pretty boring. The story starts off with the world in danger. Rena and Claude travel together to save the world. They meet people along the way who will help them, blah blah blah. There is a twist at the halfway point, but it’s nothing thought provoking at all. Saving the world has never been so boring. Also, there are plenty of characters that will join you. Each one has a unique weapon and style of fighting. Each one has some motivation for joining. Each one is different. However, once they join you, you’ll learn nothing more of them. They pretty much disappear from the scene. Sure, they may speak on certain things every now and again, but the only two characters who you will learn more and more about are Claude and Rena. And quite frankly, they’re very boring. The dialogue spoken is very dry, and seriously lacks emotion.

Gameplay: 9/10
This is where the game shines. You can buy stuff, sell stuff, talk to people, etc. One thing I did like was the Private Action. Before you enter a town, you press a button. Your main character will go off on his/her own. You can talk to the rest of your party members and initiate secret conversations. By doing this, you can raise your friendship and affection for each other. This will determine which ending you get (over 80 endings). The greatest part of the game, however, is the customization and skills. There are tons of things you can do from learning how to play an insturment, making food, painting, creating weapons, and much more. You get these by leveling up and mastering certain skills that you buy. For example, you can get the Functionality skill to make weapons, or customize them. There are tons of things to do and learn. It really is a lot of fun to experiment.

Battles: 6/10
The battle system is a creative, real-time engine. You control one character, while the AI controls the other three. You can set them in certain ways to do almost whatever you want. So you are in a battle, and you press X to select an enemy. You press X again to run up and hit the enemy. This happens very quickly. You’ll be pressing the X button over and over to defeat one enemy, and then go onto the next one. While all of this is happening, your characters are running around and hitting other enemies. However, the enemies can hit you to interrupt your attacks. You can also equip skills and use them too. Each character learns a unique set of skills, which is very cool. There is a magic system in this game as well. Each mage learns a plethora of spells. The battles can get bad, however. Sometimes, your enemies will surround one character and pummel the living day lights out of him/her. This especially sucks if it’s a mage. Mages are vulnerable, especially when they are casting magic (which takes forever). Using items is a real pain. Say you use one item on a near KO character. The item is used, but the character gets hit before the number of recovered HP is displayed…too bad. The item has no effect. So basically, if you don’t time your item use just right, you’ll lose one for nothing. Not to mention that you have to wait until a little bar goes down until you can use items again. The same applies with magic. Enemies can move very fast, making them impossible to hit as well. In the end, the battle system was a good idea. Yet, the freedom of the real time does neeed a ton of work done.

Graphics: 7/10
The graphics have their good points and their bad points. First the good. The character models are anime sprites, something I will always love in video games. They are detailed, colorful, and vibrant. Most of the towns have great designs. The architecture is different for each city. I really like the interior designs of each house and shop. They are full of objects such as plants, paintings, rugs, windows…it’s great. Now for the bad. The character sprites seriously lack any emotion at all. The only thing you’ll see that shows any sense of them showing a feeling is when little anime bubbles appear above their heads. This is cute, yet it doesn’t fit the serious (or Tri-Ace’s attempt of being serious) story. The faces and body language of the characters could’ve been done a lot better. The monster models, while creative, are used way too many times. You’ll be seeing plenty of familiar faces (but with fabulous new make-overs), even in boss battles!

Music and Sound: 6/10
The music is great. I really like listening to the fitting tracks. Most of the tunes are beautifully orchestrated. Some do get repetitive, but in the end the musical score is great.

The sounds, on the other hand, are terrible. First off is the voice acting. The characters do say things during battle. Their emotion is real, but the things they say are way too corny. A few of the characters are annoying (Precis), some should not say anything (Ashton), and some are way over the top (Opera). And the translation was poorly done as well. Seriously, this needs a ton of work.

Replay Value: 5/10
You can choose to play as a different character and to recruit new people, but it won’t change the story. You’ll still follow the same turn of events. I’m not too big on replaying this game.

Difficulty: Hard
The battle system is cheap. Not cheap as in it costs nothing, cheap as in it tries to work against you. This makes the game difficult. When you beat the game, you’ll get to access more difficulty levels, for an even greater and annoying challenge.

Buy or Rent: Rent
Rent this game to get a feel for it, and see if you like the battles. If you do, then great. You can buy this game for 20 dollars or so.

Overall, this game had a nice start, but the finish was lacking. It’s too bad, because there could’ve been a lot going for it. If you want an RPG, you can check it out but I say look at something else before this game.