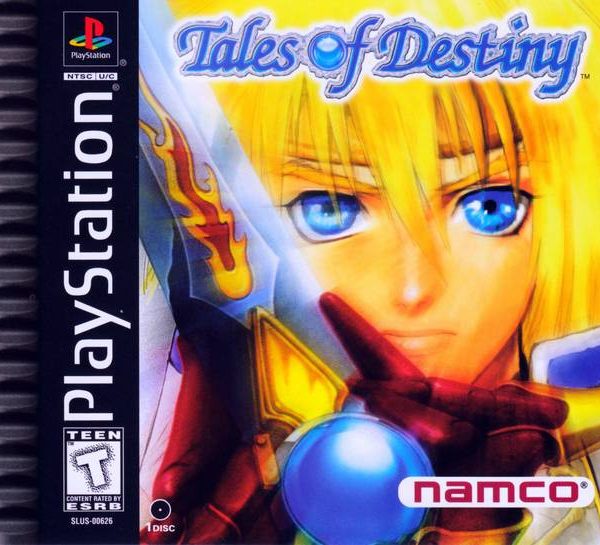 Author’s Note: This review was originally published on January 17th, 2003. It certainly shows, too. The overall tone of this review is filled to the top with fanboy lingo and way too much enthusiasm. The abuse of the English language doesn’t help matters, either. That said, I still feel Tales of Destiny is a magnificent game. If not for it, I would have hopped on the Tales of train much later in life.

Story: 9.5/10
Stahn Aileron secretly stows away on the dragon ship called Draconis on a quest to reach the continent of Seinegald. He wishes to become a great swordsman and do some good in the world. However, he soon meets up with the Swordian, an alive sword, named Dymlos who is blessed with the element of Fire, and who forever changes his destiny. This story is just like an anime, not some RPG that makes you think really deep. I prefer this story to some of the ones that are too confusing or too crazy. I just wish Namco could have added a few more twists in the story, but the story is near perfect as it is!

Gameplay, Field: 10/10
Nothing wrong with the gameplay at all! Your menus are easily activated and easy to learn. Also, the field maps are large enough to explore, but small enough to get around easily. There are tons of treasure chests to find and TONS!!!!! of objects to interact with! There are various shops to go to as opposed to just the weapon shop and armory. What is usually ho-hum in an RPG has been greatly transformed in Tales of Destiny!

Gameplay, Battles: 10/10
OH MY GOD!!! THESE ARE SO MUCH FUN! You randomly encounter enemies in a dungeon or the world map, and combat begins. You can have up to four characters at once. You control Stahn, and you set the computer to deal with the other characters. Each character has their own unique strategies to set. Combat is done in real time!! Unlike turn based games, you actually move Stahn around the 2D plane and have him attack! He can do various normal attacks, and as his level increases, he gets skills to use in battle as well. Also, anyone who uses a Swordian can cast awesome magic spells! Another cool thing is that you can add Discs to Swordians, and cast new spells! Each character has their own unique special moves as well! As you get better, you’ll be able to pull off powerful combos, leaving your enemy helpless. Namco did an awesome job with the combat system. It makes leveling up one of the joys of life in this game!

Gameplay, Character Development: 10/10
Stahn is not like most RPG heroes. He isn’t reluctant to save the world, he doesn’t have a tragic past, he doesn’t act like a BA whenever he gets the chance, and he doesn’t care about winning the girl’s heart. He just wants to do some good in the world, making him an ideal hero and an honest-to-goodness man. He really matures as the quest continues. The same goes for the other characters! You will laugh at Rutee, wonder about Mary, and really think deeply about Leon. All of the other characters develop well over time too, just like they do in anime. Excellent!

Graphics: 8.5/10
The graphics are 2D anime sprites. I highly prefer this to 3D polygons. Each character sprite is unique and colorful. The backgrounds are equally nice, showing nice scenery and tons of shading. However, much of the graphics look like SNES quality. They could’ve easily kept the graphic system, but they could have added something to make it seem more Playstation-ish. This will definitely turn many gamers away from the game, but still, the graphics are nice.

Sound: 10/10
First off, there are Japanese voices in the game!! It’s so cool! Each voice actor plays a role in various animes, so you know they have experience. Also, each voice is unique and totally fitting to the character. The sound effects are nice too! I just love the sound!

Music: 9/10
There are many great tunes to listen to. The battle music is great, and the town music is really fun. Much of the music however sounds a bit like SNES quality. Again, Namco could have spiced it up a little. However, the music is still great.

Replay Value: 7/10
With tons of mini-games, treasure to miss, and characters to try you will definitely be playing this game again. This is one of those games that you will have for all time. But as an RPG, you won’t be playing right after you beat it.

Buy or Rent? Buy
Buy this game as soon as you see it! It’s so hard to find! When you do find it buy it and never, ever let it go. It’s a true jewel of a game well worth $30.

RPGs just aren’t made like this anymore. This game is definitely one of the better ones out there, and well worth anyone owning. Good luck finding it, and when you do find it, have fun!