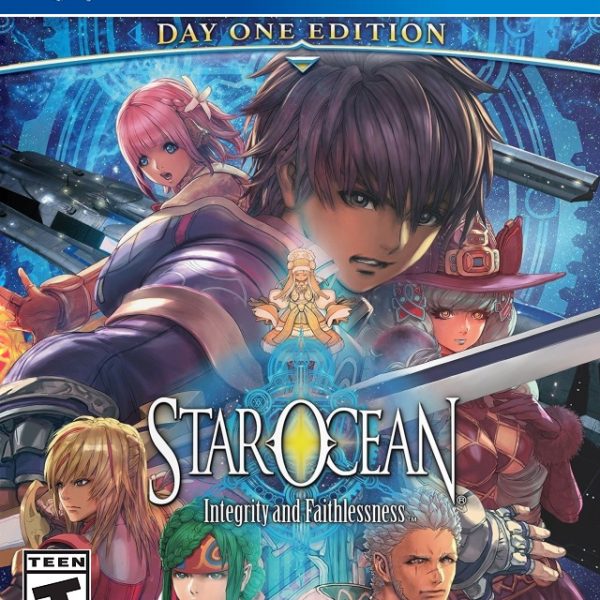 Star Ocean: The Last Hope left some folks with a sour taste in their mouths. I liked it, but its plot, characters, character graphics, limited Item Creation and other unfortunate nuances needed some work. When a new Star Ocean was announced years after The Last Hope, everyone felt a glimmer of hope, no pun intended. Maybe, tri-Ace would learn from their mistakes and create modern Star Ocean that did the series justice. After months of speculation about what the final product would be, Star Ocean: Integrity and Faithlessness was released in Japan on March 31, 2016. What happened next was unexpected: there was a boatload of negativity thrown at the game from every direction. This trend continued when the game was released in June in the states. After playing the localized version, I think most of the negativity was grossly exaggerated. Just like The Last Hope, I really enjoyed Integrity and Faithlessness and I’m wondering where all of this vitriol is coming from. What causes people to bash Star Ocean: Integrity and Faithlessness so much?

Is it the graphics? I hope not. Integrity and Faithlessness is as pretty as they come. The characters you control, the folks in town, the enemies you face, the areas you explore and the special effects are gorgeous. Each area you explore will feel familiar to anyone that has touched an RPG, but in Integrity and Faithlessness, their look is much more vibrant. It has the look of a polished game that shows what the PlayStation 4 is capable of producing. I was never one to care much about a game’s graphics, but they definitely help. Is it the music, voice acting and/or sound? Again, I hope not. Voice acting is excellent, no matter if you go with the English or Japanese options. With Motoi Sakuraba behind the soundtrack, the music sounds like it should for a Star Ocean title. There are epic orchestrated pieces, upbeat battle anthems and some of the most elegant instrumental arrangements when you’re in a town setting. The soundtrack is grand, and fans of the series will immediately recognize some returning songs with upgraded sparkle.

So if not the presentation, maybe it’s the story that causes the game to get heavy flack. The game begins on the medieval planet of Faykreed. In the village of Sthal, Fidel Camuze is sparring with his friend, Ted. After they finish, Fidel and his best friend Miki Sauvester learn of a group of bandits that want to infiltrate their town. While bandits are thwarted, Fidel and Miki decided to travel to the capital to seek more help. During their travels, the two friends meet an amnesiac young girl from a mysterious structure with magical powers unlike anything the two have ever seen. Only remembering that her name is Relia, Fidel and Miki decide to investigate her origins and help her return home.

This “first contact” will turn into space-age adventure for Fidel and his friends. The story sounds somewhat familiar, especially if you played previous games in the series. The truth behind young Relia is what will drive the party forward. With a cast of different characters and personalities, plus the return of Private Actions that let you get to know them further, I think the story in Integrity and Faithlessness is fine. It’s not a masterpiece; I would have liked to have seen a more fleshed out narrative because most of the characters outside the main cast don’t get enough screen time. But, the story is not the worst I have seen in an RPG. I’m not surprised by this, either. The Star Ocean series isn’t known for their stories unless you count the controversial plot twist in Till the End of Time.

Some people didn’t care for the story because you rarely travel outside the planet of Faykreed. Remember, Star Ocean is heavily inspired by Star Trek. I’m not a Star Trek fan but I made a compromise to begrudgingly watch most of Star Trek: Voyager and a few of the movies. Nearly every episode or movie in the Star Trek universe that I’ve seen seems to revolve around meeting new, human-like lifeforms and the crew of the ship remaining on one planet or their ship the entire duration of said episode or movie. Star Ocean is similar. With the exception of The Last Hope, there is very little planet hopping in the series. So, not being able to explore a variety of planets should not bother you in Integrity and Faithlessness because it’s SOP.

However, there is one thing that does deserve to get bashed. Honestly, I’m surprised it doesn’t get mentioned more because it’s a downright awful feature. In Star Ocean: Integrity and Faithlessness, most story events seamlessly transition from normal game play to events that cannot be skipped. Similar to games with long, drawn out story events like Final Fantasy X, Star Ocean has story events that cannot be advanced or skipped. During these events, you are still in control of Fidel. At first, it’s amusing to have him move around in circles or make gestures. Amusement turns to annoying after a while. Then, annoying turns to inexcusable. There is no reason why we shouldn’t be able to advance the dialogue sequences at our own pace. It cuts down on the fun of replaying the game on higher difficulties because you have to re-watch things you have already seen at the same pace.

So, the story received some negativity for being similar to other Star Ocean titles, as well as not being an epic drama. It received well-placed negativity for the way most of the story sequences play out. However, what about the thing I look forward to the most when it comes to the series? Of course, I’m talking about its gameplay. When Star Ocean is mentioned, I immediately think of Item Creation. Integrity and Faithlessness doesn’t disappoint in this department. Sure, going around towns and dungeons is fine, but the real fun comes with creating items with raw materials. This can be done at any time. You are also able to gather resources from gathering spots around various locations. Favorites such as engineering, crafting and alchemy have returned along with the ability to synthesize up to six random items for even more random results. Welch Vineyard has returned and will teach you new techniques the further you get in the story.

Outside of Item Creation and exploration, Star Ocean is also known for its action-packed battle systems. Integrity and Faithlessness has a battle system that feels familiar to the one featured in Till the End of Time, but also has some new features. You can execute a weak attack, a strong attack, guard, dodge and perform special attacks or spells by mapping them to the X and O buttons. Characters can equip up to four special attacks, two for the short range and two for the long range. With well-timed button presses, you are able to cancel attacks and combo with another attack with increased damage potential. At the start of the game, it’s important to pay attention to the type of attacks you perform. Weak attacks will cancel strong attacks, strong attacks will break a guard, and a guard will prevent heavy damage from weak attacks. In fact, a well-timed guard will cause your character to perform a counterattack. As you progress and learn more abilities, this rock-paper-scissors idea gets thrown out the window and chances are you’ll be mashing powerful skills to obliterate fields of enemies. Star Ocean’s battles stay true to form with a flurry of numbers flying every which way and plenty of explosions to go with. Like the story events, battles will seamlessly transition as you explore various fields and dungeons. All party members who join you participate; ultimately meaning you can control six characters. Relia participates in battles, but she cannot be controlled.

My favorite feature of the battles is the Role System. Each character can have up to four Roles that can grant passive boosts, influence everyone’s actions, potentially add status ailments to enemies and most importantly dictate how the party member’s behave when they are under the control of the AI. There are tons of Roles to discover through powering up different Roles as well as Private Actions. This means you can customize your team to act the way you see fit. Relia can also equip Roles, adding more possibilities.

So, we covered the presentation, the story, and the gameplay in and out of battle. Together, they form a fun game but not flawless game. The final thing to discuss is the length. Star Ocean received the most criticism for being too short with folks claiming to have finished the game in 20 hours. The only way I find this possible is that they didn’t bother to enjoy themselves and made a beeline to each story event. Did they participate in Private Actions? Did they dabble in Item Creation? Did they explore the bonus dungeons? Did they fulfill any bulletin board requests? I’m guessing the answer to that is no. Star Ocean: Integrity and Faithlessness is an RPG. Like most RPGs, there’s always stuff to do when you’re not advancing the story. Why would you ignore all of the extra stuff Star Ocean offers? By the time I reached the ending credits, I clocked in 40 hours. I can tell you that number will likely get doubled as I attempt to earn all of the trophies. The bottom line is that Star Ocean: Integrity and Faithlessness is a fun game that has received far too much condemnation. If you’re a fan of the series or are in the mood for a new RPG, then Star Ocean: Integrity and Faithlessness is solid recommendation.

Overall, 7.5/10: Star Ocean: Integrity and Faithlessness is not perfect, but it’s a fun time. I recommend it.