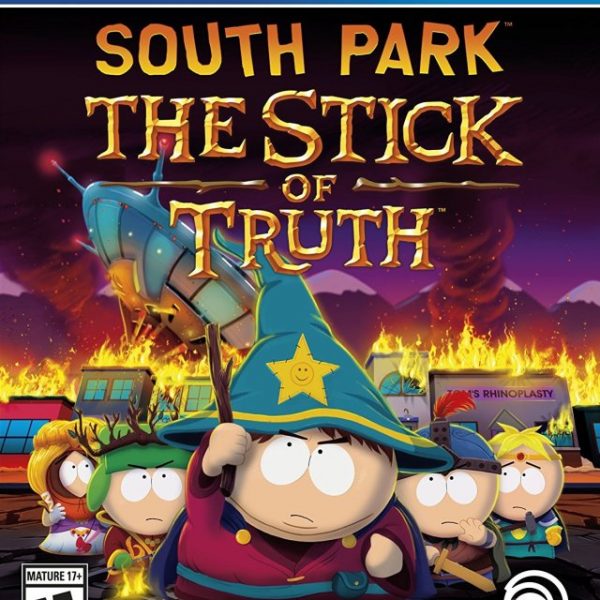 A few weeks after it started airing on Comedy Central, a friend of mine began talking about this hilarious cartoon with foulmouthed children called “South Park.” In those days, watching South Park was considered taboo due to the content. As the episodes continued to air, the show’s popularity increased substantially. Today, South Park is one of the most critically acclaimed brands in all of entertainment. Naturally, it didn’t take long for the South Park brand to enter the video game medium. Unfortunately, or perhaps as expected, each game was a total disaster. That is, until Obsidian and the South Park creators stepped in to create a game that they envisioned. South Park: The Stick of Truth is a fantastic game that finally does the brand justice. Of course, it’s important to keep in mind that it is a South Park game. This game is not for children.

The Stick of Truth opens with you creating your own South Park character.  Your character is the new kid in South Park. After getting thrown outside by your parents, you run into Butters. Dressed in paladin garb, Butters invites you along to play a make-believe Dungeons and Dragons inspired game with the rest of the kids of South Park. Upon meeting the other members in the Kingdom of Kupa Keep, you’re given your mission to guard the Stick of Truth from the elves. He who holds the Stick of Truth controls the universe. It’s your job to protect it.

The funny thing about this story is that Stan, Kyle and the rest of the gang are fully invested in this make believe world. While they often times break character, the overarching plot has its shares of surprises and twists. But, the more important thing to realize is that the story has the content you’ve come to expect from South Park. There’s swearing. There’s blood. There’s gore. There’s Al Gore. There’s everything. And, it’s awesome. Every time I played The Stick of Truth, something made me laugh out loud. The game does a great job of highlighting all of the great characters and history of the show, while delivering a new narrative at the same time.

One of the first things you’ll notice about The Stick of Truth is that it puts you in total control of your own South Park episode. If you like the look of the show, then you’ll like the look of the game. It’s a blast moving through South Park at your own pace and exploring all it has. The music that accompanies this fantastic design features old hits (Taco Flavored Kisses, Simultaneous Lovin’, Montage, etc.) as well as new ones that fit the tone of an RPG. Naturally, the game is fully voiced with all of the voice actors and actresses from the show.

So, by this point you’re probably wondering if the game is actually fun to play. Remember, South Park’s track record in the video game world has been terrible. Perhaps the biggest surprise about The Stick of the Truth is how well-crafted the game is. First, there’s the exploration. I already touched on it a bit, but your character and a buddy are able to explore the entire town of South Park. As you explore houses and buildings, you’ll be able to find a plethora of items that pay homage to earlier South Park episodes. You’re able to interact with the environments to create shortcuts, reveal new paths, or find collection items. Not all areas can be explored immediately. In a Legend of Zelda type of fashion, progressing with the story unlocks new field abilities for you to use to make more discoveries. But, let me remind you again. This is a South Park game. Some of your exploration abilities, as well as the places you explore, will take toilet humor to a new level. I’ll leave it at that.

Combat is just as fun. A classic turn-based system serves as a backbone for battles with multiple options. Standard attacks rely on timed button presses to inflict more damage. Buddies can use special actions to turn the tide of battle. Skills have different requirements that range from rotating the analogue stick to following a Guitar Hero inspired prompt. Prior to battle, your character can equip a variety of weapons and armor. These can be adorned with patches and strap-ons (again, it’s South Park) to increase their powers or add special effects. Really, if I had one critique about the battle system, it would be that your character’s maximum level is 15. Once you reach that level, there isn’t much benefit to participating in combat.

But, my biggest issue with The Stick of Truth happens immediately after combat. After you achieve victory, your enemy is lying on the ground. In a typical RPG, you get rewarded with money and items after the final blow is dealt. Here, you have to go up to the body and examine it. The problem with this is that enemies can be bunched together and it can be hard to see if you’ve checked it or not. Plus, due to a small item limit, there’s a chance that you might end up missing something valuable. There are lots of things you can permanently miss in The Stick of Truth, which can lead to some frustration.

But, if you do miss something, it’s easy to go back and try again. The Stick of Truth is a very short game. You can finish it in about 10 hours. If you follow an item guide, you can finish it and find all of the hidden items. It didn’t take me long to not only finish The Stick of Truth, but to earn the game’s platinum trophy. Despite this short length and some of the issues with combat’s aftermath, I highly recommend The Stick of Truth. If you’re a longtime South Park fan like myself, then you’ll get the most enjoyment from it because this is the South Park game that the fans have been waiting for.

Overall, 9/10: South Park: The Stick of Truth is more than just another South Park game. It’s a product made with care and appreciation that does right by the South Park brand. But, just remember. It’s South Park. Don’t play this if you’re easily offended.