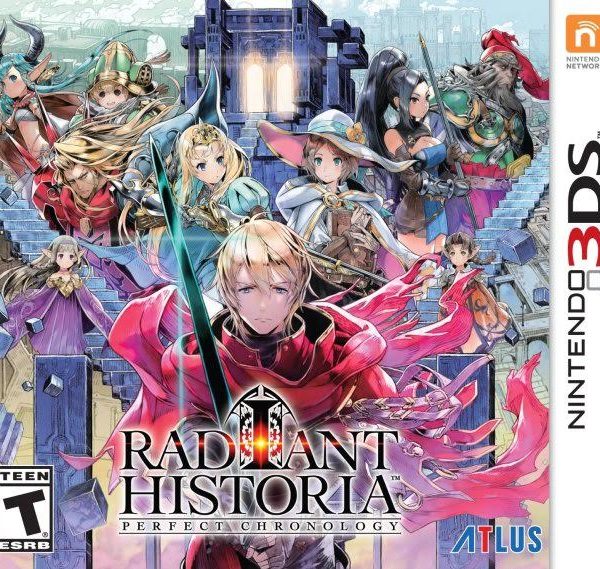 Something that surprised me in 2017 was the announcement of Radiant Historia receiving an enhanced port for the 3DS. While the original DS game had a few issues, I thought the finished product was fine. Epic? Nah. “GoaT”? Definitely not. And, that’s cool with me. Not every game needs to have tens across the board. I’m not sure what compelled Atlus to greenlight an enhanced version.

Most likely, the first thing  you’ll notice about this port is that it features voice acting. Main characters are fully voiced, whereas NPCs offer quips. It was a good choice to add voice acting. Interestingly, the voice of Stocke sounds exactly how I imagined he would when I played the original version. Aside from the voice acting, there isn’t much different in terms of presentation. The sprites, environments, monsters, and the rest look just as crisp as they did on the DS. There are some new anime stills and a new opening animation. This was a nice touch. More good news? Yoko Shimomura’s lovely soundtrack is back with some additions. The bad news? The character art took a major hit. The beautiful character art from the original game has been replaced by generic, Sword Art Online trash. I can’t stand this art style. Luckily, it doesn’t take away from the experience; it won’t take long for your eyes to adjust.

So, what else has changed? The first is that the game has two story modes: Perfect and Append. The game recommends that you go through Append Mode if you’re new to Radiant Historia. Perfect Mode is suggested for those that have already played the game. I’ll tell you right now: ignore Append Mode no matter your experience. Append Mode locks you out of the new story content until the end of the game. The new content is excellent. Participating in it along with the regular story paints a much better picture of the Radiant Historia world. The story’s initial scenes set a fantastic stage. It stars Stocke in the kingdom of Alistel. The stoic hero is given a mission to gather intelligence from a spy who infiltrated the Grangorg Kingdom. Stocke’s superior, Heiss, gives him a book called The White Chronicle and the assistance of two mercenaries, and Marco. The mission goes horribly awry, but a wounded Stocke ends up in the world of time called Historia. He gets guided by mysterious twins Theo and Lippti to use The White Chronicle to alter the past and shape the future. Stocke is able to turn the mission around and return victoriously, but he’s got plenty of issues to deal with. The world is turning to sand, allies are starting to act dubious and Stocke has plenty of unanswered questions. It’s a great tale…once you get past the first chapters. The first conversations between Stocke and company are still long-winded. They serve as tutorials that take too long to get through. Trudging through the pandering eventually yields the exciting adventure that is promised. Around chapter three, things pick up pace and the end result is a story that combines time travel, revenge and conspiracy.

While Radiant Historia is divided into chapters, it gets further divided into two time lines: Standard History and Alternate History. Thanks to Stocke’s book, he can move to certain nodes of history and alter decisions from one event to make another event more desirable. If the wrong decision is made, the world ends and he gets a chance to try again. No, I’m serious. The world will erupt into a catastrophe and Stocke warps back to Historia to right his wrongs and set history on the proper course. When (not if) you play Perfect Mode, you’ll meet a women named Nemesia. Nemesia will take you to a third timeline called Possible History. As you journey this timeline, you’ll collect the Red Artifacts that reveal the truth behind the continent of Vainqueur.

The unique time traveling formula is very reminiscent of Chrono Trigger, but takes it a step further. Stocke can also find hidden treasures, detonate bombs to clear new paths, slash obstacles with his sword and turn invisible to avoid enemy detection. It is all basic, but it’s also rewarding and functional. There is a fair amount of backtracking involved during various nodes in the histories. Usually, careful thinking can save you from repeating the same mistakes. One of the more rewarding but tedious tasks involves Stocke talking to NPCs to begin side-quests. Some of these can span the entire course of the game and require even more backtracking. Luckily, the rewards to be reaped make the effort worth it.

Battles are another area that remained largely untouched. One new feature are the multiple difficulty options. By selecting Friendly level, you can completely ignore most battles and just play the game for the story. If you want to see the new story content, but don’t want to experience some of the tedium with the battles, then consider Friendly Mode. Personally, I like the battle so I opted for the regular difficulty level. Battles in Radiant Historia have remained unchanged. Battles begin when Stocke runs into a foe. However, Stocke’s team can gain the upper hand by whacking the foe a few times with his sword, causing it to pass out. The battlefield is a three by three grid in which enemies can take up one, two or even three spots on it. Certain bosses can take up the entire battlefield due to their size. While you can just attack enemies one at a time, you’ll get nowhere and end up wasting time. The key to victory is using skills and spells to move enemies together in one square and strike them to deal massive damage to them, all while building up the combo chain. With the right set of moves, enemies will get tossed around like rag dolls and end up getting pummeled to submission all at once. Single attacks deal less damage than they would when used in a combination, thus it’s to your advantage to take control of the battlefield. Furthermore, you get better rewards with a higher combo count. This pertains to even the earliest of fights. The battle system will test your logic regarding the best strategies to defeat your foes. Later, some enemies will be protected by obstacles or be planted within the ground.

It’s important to note that you can alter the turn order of your companions. This allows you to set up the best combo possible. For instance, you can set a trap up with Aht, push two foes together into the trap with Stocke and finish with a strong attack from Rosche. The possibilities are endless. As characters continue to attack, they will build up a meter that can be used for one of two things. Sure, you can use it to deal more damage than usual with a special attack. Or, you can delete an enemy turn and potentially increase your combo count. Radiant Historia’s battle system is a bit advanced, but with practice, you can turn the tides of battle in your favor. A nifty new addition is that characters in the reserves can offer supporting attacks or supporting boosts to the team.

My favorite addition to Perfect Chronology is The Vault of Time. The Vault of Time serves a bonus dungeon where you can fight monsters for extra experience and unique items. Money is a huge problem. The Vault of Time will allow you to get desired gear while gaining experience points and not spending any of your hard earned money. Note that money doesn’t become as big of an issue near the end of the game. And, honestly, as long as Stocke is always well-equipped, you shouldn’t run into any issues.

I finished everything in Radiant Historia: Perfect Chronology in about 50 hours. This game is packed with content that wraps things up beautifully when you see the final possibilities. A New Game Plus option will let you carry over your progress. Those that are brave, or perhaps foolish, enough can try to fight the game’s super boss. Personally, going through the game once was plenty. At least, for now. There will come a time when I decide to take advantage of the New Game Plus feature and start the game anew. Radiant Historia: Perfect Chronology really surprised me in all the right ways. If you missed your chance to play the DS version, then I recommend playing the 3DS version. Even if you’ve gone through the DS version like I have, Perfect Chronology still comes highly recommended. The new content is enough to make the journey through time worth seeing again.

Overall, 8.5/10: Radiant Historia: Perfect Chronology’s biggest issue is that the story still takes its sweet time to get going. But, stick with it. Once the game opens up, it almost reaches the titular levels of “perfect.”