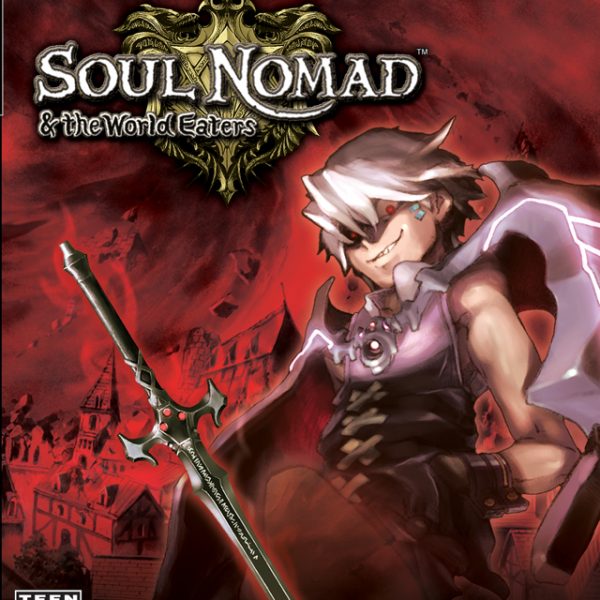 When I finished Makai Kingdom, I had no desire to go back to it for its meaty postgame content, extra endings, or endless grinding to make my character’s levels reach the thousands. I was pleased after getting the good ending and moving to something else. I expected to feel the same way when I finished Soul Nomad and the World Eaters. However, after the credits finished rolling, I started explore the parts of it I missed. There was the potential to level grind, but there were new dialogue options and story paths that took the narrative in an entirely different direction. This game is different from other Nippon Ichi titles. It might be the best PlayStation 2 title from the niche developer.

The game takes place on the continent of Prodesto. After years of war and peace, strife and sacrifice, and good and evil, a god of destruction named Gig summoned titans known as World Eaters. These monstrosities ravaged Prodesto. As the people started to lose hope, a woman named Layna rallied her friends for a final confrontation against the World Eaters. The battle ended in a stalemate. The World Eaters fell silent, and Layna took her remaining followers to a hidden village. 18 years later, a youth named Reyva is getting ready to celebrate coming of age. However, Gig returns in a corporeal form and fuses with Reyva’s soul. Gig wants to destroy the world, but he needs Reyva’s body. Reyva refuses to relinquish. Can Reyva keep Gig in check? Or, will Gig and the World Eaters finish what they started?

Soul Nomad’s tale has a lot of the whacky hijinks that we’ve come to expect from N1. But, that’s at the surface level. The further you get into the game, the more Reyva, Gig and the rest of the colorful cast of characters (both heroes and villains) develop in the most unexpected ways. There are plenty of comical moments, but there are also moments of tragedy and loss. Reyva is a silent protagonist with a boatload of selectable dialogue options. After finishing the game once, new options appear that will put the story on a different path with even more unexpected outcomes. Gig is the real star of the show. He’s crass and rude, yet you can’t help but to love him.

Soul Nomad looks fantastic. Character art is detailed, the 2D sprites range from cute to stunning (the World Eaters are magnificent), and the special effects feature over the top attacks that look like they come straight from anime. The world map and the battlefields didn’t receive as much care, but they work. The music is catchy with a few earworm tracks. The game is mostly voiced with either English or Japanese options.

After the game’s introduction, players get introduced to combat via a one-on-one duel. At its core, Soul Nomad is a tactical RPG. You move your units across a map and can perform an attack when within range. Simple stuff. It doesn’t take Soul Nomad long to open with a variety of mechanics and features that separate it from other games in the genre. They come together to form something unique. In Soul Nomad, your combat units are called Rooms. Rooms house up to nine troops. These troops can be the story-related characters that join Reyva, or they can be generic units that you purchase. Troops will level up and grow in stats, but they won’t be learning any new spells or abilities. Each Room has a front, middle, and back row. Your troops will perform different attacks depending on the row they’re placed. The right combination of troops will unlock special attacks. Rooms can be equipped with Décor to grant bonuses, and many Rooms come with pre-equipped Décor. More Room types get unlocked the further you get in the story.

In a typical battle, you’ll move your “units” across the battlefield. When you initiate an attack or get attacked by an enemy, the game shifts to the combat phase. Both sides exchange blows for one round, and then you’re returned to the battlefield. You have no control over which enemies your squads focus on, but the AI usually does a good job with targeting. When the leader of a Room is killed, the entire Room is removed from the battlefield. This continues until all enemy Rooms are removed. Perhaps the most important thing to keep in mind with combat is Stamina. As you perform actions, this gets reduced. Lower STM means lower combat performance. When a battle ends, you’re rewarded with items and the game’s currency: Gig Points. There aren’t traditional weapon or item shops in Soul Nomad, but Gig Points are used to buy Décor, special items called Gig Edicts, and more.

So, how does one set up a Room in the first place? One of the options available on the world map is Arrange; the area of Soul Nomad where you’ll spend the most time. In fact, you’ll spend more time preparing for combat than in combat. Using the Change Room command creates a new, random room. There’s no way to know what you’re going to get. So, if you want a specific Room with nine slots, then you’ll be using this command constantly. The RNG does get frustrating, but there’s good news: when you get a Room you like you can lock it to avoid it getting lost next time you change. Rooms can be powered up with Investigations; Soul Nomad’s version of the Item World. There are other aspects that come into play with designing Rooms such as Bad Vibes, Potential, Zone of Contact, and Room Points. All of this sounds like a lot, but it doesn’t take that long to understand nor take advantage of these provided tools. Soul Nomad can be challenging but there’s plenty of these options to rise to the challenge.

And despite some toughness, I never got a Game Over during my first time through. Nor did it take long to get to the end. I saw the credits rolling after 30 hours. But, that timer will definitely go up because of all of the unlocked story options available. The replay value in Soul Nomad is of the same caliber as other N1 titles, but it’s the first title in years that has me interested in seeing as much of it as possible. Getting my characters leveled to the thousands is exciting, but it’s just as exciting to see what new choices and story options become available. This excellent combination of story and fresh gameplay makes Soul Nomad and the World Eaters one of the best games ever produced by Nippon Ichi that any RPG fan will enjoy.

Overall, 9/10: Soul Nomad and the World Eaters may look like another N1 title, but there’s more than meets the eye. Creativity pours over to form one of the most memorable tactical RPGs.