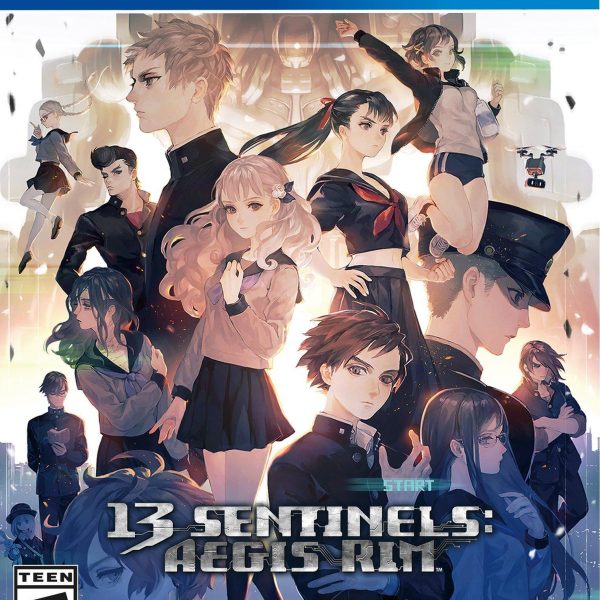 There are some games that I go into without any idea of what to expect. For me, 13 Sentinels: Aegis Rim from Vanillaware was one of them. As a fan of Muramasa: Rebirth and Odin Sphere: Leifthrasir, I knew I’d at least get stunning graphical presentation. There wasn’t much to go off outside of that. In fact, online word of mouth was what made me take the plunge. I’m glad I did. This is a magnificent game. It’s an easy game to recommend to everyone because it does so much right.

It’s hard to really get into the story of 13 Sentinels without going too deep or getting into spoiler territory. The game’s narrative is one of its best features. The game begins in Japan in the year 1985. A high school student named Juro Kurabe is walking home from school with his friend Kyuta Shiba discussing sci-fi films, and enjoying what seems like a regular afternoon after class. Suddenly, a robot the size of a house, and resembling the mecs Juro sees in his favorite movies and recent dreams materializes into the middle of the street. Juro doesn’t realize that this robot is a Sentinel, and it’s critical that he learns how to use it in order to save the world from an oncoming threat of aliens called kaiju.

But, that’s just the start. Players might meet Juro first, but the rest of the characters (the other 12 students that come together to make the titular 13 Sentinels) have very detailed backgrounds, personalities, struggles, and stories. The story will literally jump through time and space, bombard you with new characters, terms and key words, and always keep you guessing. I thought that it would be a struggle to keep track of everything, but a handy flow chart and glossary were always at the ready in case I had to remind myself of something. I would go back to these tools often for a reminder, but also so I could enjoy certain events again.

13 Sentinels is a unique combination of adventure, visual novel, tower defense, and real time strategy. This mélange of genres might sound bizarre, but Vanillaware put them together in a way that works magically. There are three game modes: Analysis (the aforementioned tools that let you revisit terms and events), Remembrance, and Destruction. Most of the time (my total playtime was 32 hours) was spent in Remembrance: the adventure and visual novel portion of the game. All 13 students have their own path to follow which culminates into the grand finale. At first, only a few of the paths are open. As you progress through the story, more characters and pathways will unlock. This lets the player not get too ahead in the story, and ultimately, allows it to flow at a good pace. As you’re playing through a character’s scenario, you will get to move them through various locations, utilize a unique Key Word/Item system to create new dialogue situations, and make choices that will continue to get you closer to the truth. Unlike other visual novels, there’s only one ending. All the choices you make are required to reach the end.

Going through the hefty amount of dialogue in Remembrance is fantastic. However, there were times I needed a break from the conversations and overloads of information. This is where Destruction comes into play. The goal of combat is to defend a Terminal for at least two minutes, or until all the enemy kaiju have been eliminated. Up to six pilots can be selected for battle, with each of the pilots manning a different generation of Sentinel. Generation 1 Sentinels are masters of close ranged combat, Generation 2 Sentinels have balanced abilities, Generation 3 Sentinels mostly utilize long range attacks, and Generation 4 Sentinels have the best mobility. Each sentinel can equip a variety of abilities and passive, which can be enhanced with rewards from battle. Finally, every Sentinel can have their parts upgraded.

Really, combat is simple in theory. You need to defend your terminal while blasting the enemies with rockets, missiles, lasers, and more. When one of your pilot’s turns arrives, time stops, and you can issue a command. From there, the pilot instantly carries out their action. Kaiju will pour in by the hundreds, but every Sentinel has the tools to dispose of them in endless blazes of fiery and electromagnetic explosions. It sounds like the battles would be overwhelming. Personally, I never played a tower defense game and my only experience with anything resembling RTS was during my time with the Growlanser series. Again, combat is a simple, straightforward affair that is easy to pick up. I never felt overwhelmed by the enemy numbers. I never felt like a situation was dire. I never found any of the game’s bonus objectives extreme. In fact, I managed to get an S rank on each battle after my first try. The rankings are generous; earning a coveted S rank not only feels satisfying but it unlocks additional content. For those that just want to rush through combat so they can get back to the story in Remembrance, there’s a casual level of difficulty available. Like Remembrance, not all battles in Destruction will be available from the start. Players will have to reach a certain point in Remembrance to unlock remaining missions in Destruction, and vice versa.

Whether you’re watching the story unfold in Remembrance, reading the glossary in Analysis, or obliterating kaiju in Destruction, you can count on one thing: 13 Sentinels will provide stunning visuals that words in a review won’t do justice. Unlike the settings of other titles, 13 Sentinels is a work of science fiction. You won’t see any whimsical creatures or fantastical locations. The same quality of stunning, hand drawn backgrounds and character designs are utilized, but you’ll be seeing them in modern day settings such as a school or a busy crosswalk. You’ll be seeing futuristic space stations, ruined cities and towering skyscrapers. The graphics shine brightest when the Sentinels and kaiju appear; meticulously crafted metallic constructs that tower over everything.

Sadly, the graphics aren’t as beautiful in combat. Sentinels and enemies are represented by shapes. The attacks that both sides unleash are represented by flashing colors and more shapes. It’s entertaining watching the screens fill with explosions and numbers and colors, but a part of me can’t help but to wonder how much more of the edge the graphics would have been if that signature Vanillaware style was used in combat. The soundtrack is another area of excellence with personal favorite composer Hitoshi Sakimoto leading the score. The tunes feature more modern instrumentals and melodies in deference to the game’s science fiction story. It’s a great collection of music that provides easy listening outside of gameplay. Finally, the game features both Japanese and English voice acting. I chose the Japanese option due to the setting, but both options are quality performances.

When the game ended after 32 hours (and the platinum trophy popped) I was sad to see it end. Yes, it’d be easy to go back to Analysis and revisit the entire story from start to finish, but that (or a replay) wouldn’t be able to recapture the appeal of the first time through. I’m happy that I took a chance with 13 Sentinels: Aegis Rim. I didn’t get a medieval fantasy with hack and slash gameplay. Instead, I got a combination of genres that blended superbly. If titles like this are what’s to be expected, then much like the pilots of the Sentinels in this game, I’m eager to see what the future has in store for Vanillaware.

Overall, 10/10: Beautiful graphics and music. Amazing writing. Likable characters. Intense yet welcoming strategic combat. 13 Sentinels: Aegis Rim has it all, and does it all correctly.