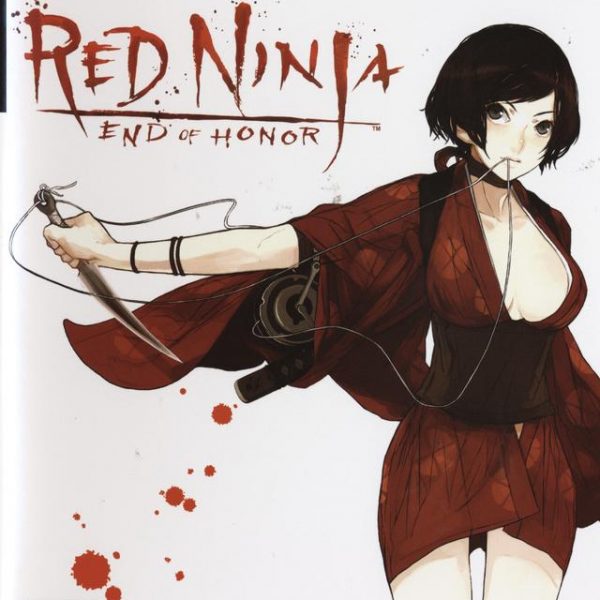 Red Ninja: End of Honor is a story of vengeance. In feudal Japan, two armies are at each other’s throats for supremacy over the entire country. As these two armies fight against each other with their swords, a new type of weapon called a “gun” has been created by an inventor in a small village. Witnessing the level of destruction the gun can cause its inventor, Ryo, decides to burn its blueprint. Afterwards, a group of enemy ninja called the Black Lizard Clan invade Ryo’s home and massacre him. Ryo’s daughter, Kurenai, witnesses the brutal murder. She end up getting heavily wounded and left for dead by the Black Lizard Clan. Hanging in a tree by a wire weapon called a tetsugen, Kurenai is rescued by a kunoichi named Chiyome. Under Chioyme’s tutelage, Kurenai becomes a full-fledged ninja and is ready to use her newly mastered tetsugen in order to get revenge on the enemies that murdered her father. A story of revenge at its finest, Red Ninja: End of Honor is full of despicable villains and worthy heroes. Kurenai is a great leading lady. You’ll be cheering for her the moment the game begins due to her unfortunate circumstances. Kurenai is often assisted by other ninja that have their own unique personalities. Certain events near the end of the game are predictable, but the story is still enjoyable.

Another aspect that’s enjoyable is the presentation. As usual, the PlayStation 2 shows some fantastic full-motion cinematics and provides excellent in-game graphics. The character models move fluidly and traverse a variety of environments. Killing enemies either via stealth or during combat is bloody satisfying. You never really realize how much blood a human-being contains until you see all of it spray from their neck or severed stomach. Unfortunately, the enemy variety is lacking since most goons look the same from level to level. Luckily, the bosses have a more creative look. The music in Red Ninja fits the feudal Japan setting. The game’s ending theme really fits with the overall mood of the story and Kurenai’s struggles. Beyond that, most of the voice acting is serviceable. I would have liked to have seen an option for Japanese voice acting since the game takes place in Japan.

Kurenai’s story of revenge takes place across a variety of stages ranging from run of the mill villages to shipyards in freezing cold water. She needs to rely on stealth, a variety of items, agility, her beauty and her unique tetsugen in order to emerge victorious. The more you read about all you can do in this (or another, but hopefully just this) review, the more exciting Red Ninja: End of Honor will sound. Like I mentioned earlier, Kurenai’s weapon of choice is the tetsugen. This unique weapon consists of a retractable razor sharp wire with a sharper blade at the end. The possibilities with it seem endless. Kurenai can hold the hilt of the blade and strike enemies quickly at short range. Like a true ninja, she can sneak up on enemies and perform a variety of stealth kills. If you don’t feel like getting close to an enemy, you can use the wire and throw the blade an enemy’s abdomen, legs or head. With a push of the button, Kurenai will yank the blade out and usually various body parts will become separated from the enemy. The wire can also be used to clothesline a group of enemies. Dead enemies can be moved out of sight in order to prevent detection. Outside of dismantling foes, the tetsugen is used as a grappling hook, a make-shift elevator and more depending on which attachments you select. It’s important to keep the wire’s tension in mind or it could snap. Kurenai also has access to various ninja tools such as healing potions, blow guns and kunai. As a ninja, Kurenai can sneak, swim, run on and rebound off of walls, and perform other acrobatic stunts. Finally, she can seduce solitary enemies in order for them to drop their guard and perform a stealth kill. At the end of a level is a boss fight that requires you to perform specific attacks with the tetsugen. After that’s finished, Kurenai’s abilities will be upgraded.

Sounds fun, doesn’t it? The problem with Red Ninja: End of Honor is that most of these stunts seem to work like they should. This, coupled, with one of the worst cameras in video game history, makes Red Ninja: End of Honor frustrating and sometimes unplayable. First, the seduction technique never seems to work. So, don’t bother with it. Second, performing a stealth kill relies more on luck than timing. Chances are you’ll end up swinging your weapon and alerting the enemy instead of performing a stealth kill. Third, the long range attacks never seem to work on bosses. Fourth, performing a wall run or a long jump can lead to an immediate death due to the camera messing up at the worst time. I could on. There is so much stuff that Red Ninja promises but none of it works like it should. The in-game tutorials describe Kurenai’s abilities in detail but following them to the letter doesn’t work. The biggest blow is that the potential was there. The image of a busty ninja, clad in red and swinging through the air while striking her enemies from a distance seems like a perfect recipe.

If you somehow manage to power through it, Red Ninja: End of Honor will take about eight to ten hours to finish. There are multiple difficulties to select, but I’m confident going through the game once will be plenty for anyone that dares to do so. When I first played Red Ninja: End of Honor years ago, I will admit that I was hoping for a carbon copy of Tenchu. Playing the game again years later with a fresh perspective, I still wish the developers took multiple cues from the Tenchu series to not only make the game more fun, but to make the game more playable. Even if the graphics, music, story, setting, and characters sound enticing, don’t play Red Ninja: End of Honor. Seeing all that the game offers means playing the game, which is something I don’t recommend to anyone even to the most die-hard fans of ninja games.

Overall, 3/10: Red Ninja: End of Honor traps a worthy and beautiful kunoichi in a game that is more broken than Japan’s political system during the game’s setting. Don’t play it.