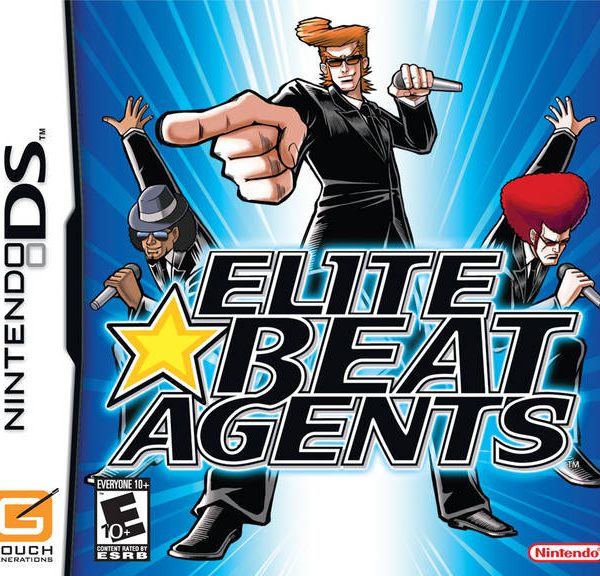 Author’s Note: This review was originally published on January 29th, 2007. It was probably one of the most arrogant reviews I’ve ever written. Hopefully, you reading this doesn’t dissuade you from checking out the game. It’s still entertaining and worth playing.

I needed a DS game, and fast, but considering that the DS has a limited selection of quality games, I had a tough time finding one. Then, Elite Beat Agents showed up. This gem of a rhythm game is both fun and frustrating all at the same time. Mixing fun songs with a crazy cast and story, it is sure to go down in DS history!

The Elite Beat Agents are a secret service type of squad that solves problems for society by dancing. Whether it’s showing a lost dog his way home, helping a captain find treasure or creating a major motion picture, EBA is on the scene. And yes, those are actual game scenarios. Commander Kahn, leader of the EBA, sends you to help these people. Needless to say, this game is hilarious.

To begin helping these people, you first chose an agent. You start off with Agent Spin and Agent J, but by finishing their scenarios you can unlock more agents. Each agent also has a level of difficulty, with Agent Spin being the easiest. Then, you take the stylus and tap on a location that requires your help. You watch the scenario and then, “Agents are GO!!” The missions are solved by the EBA dancing to some of the most popular songs.

On the top screen you have your score and the people you are helping. Depending on how well you do, you’ll see them react in different ways. Granted, it is hard to watch this because if you look too long, you’ll miss a beat. The bottom screen is the important one. Near the top of it is your YES meter. When that runs out, it’s game over. It’s very frustrating when this happens (and it does happen a lot on the higher difficulties) because you have to start the whole song over. Anyways, on the bottom screen there are circles with numbers in them. You have to hit these in numerical order when a second circle encloses upon the first one. If you hit them at just the right time, you get the most points possible. When you complete a number set, you’ll get a bonus depending on how well you do. Some circles have bars attached to them, and this means that a ball is going to start rolling. In this case, you have to keep the stylus on the ball the entire time. Finally, there is the spinner, which happens to be the worst part of this system. You have to spin this damn thing as fast as you can before the time runs out in order to fill a meter up. On some of the higher difficulties, you’ll be pressing the screen so hard and spinning so fast, you’ll feel as though you’re going to break the screen!

You keep up this chaos until the song ends. After that, you finished the mission, get a grade, and move onto the next story/song. There are 19 songs in all, some of which have to be unlocked. Their difficulty ranges from easy to insanely difficult. But, practice makes perfect. When you start a new game with a higher difficulty level, don’t expect to nail a song on your first try. It does get frustrating, believe me, but practice is the key to success in this game. Besides, there are some rocking tracks to listen to as you attempt to save the world with dance!

The OST is one of the best I’ve seen in a game. Songs include Sk8er Boi, Material Girl, ABC, Makes No Difference, and other great hits. A few of the songs annoyed me, but that’s just because of their difficulty in the stage.

The graphics are very different depending on which screen you look at. The top screen is full of manga style art work that plays out like an actual manga book. The bottom screen shows the EBA getting their groove on as you hit the marks. Unfortunately, you can’t enjoy either because you’ll consistently be looking at the marks, and only the marks.

But, these short-comings can be overlooked. I really enjoyed this game, despite some of the insane difficulty settings. This game has tons of extra content, so I say you buy this game because you’ll easily come back for more. If you need a rhythm game, especially for a system that needs a game of this genre, then pick up Elite Beat Agents for the Nintendo DS. Agents are GO!!