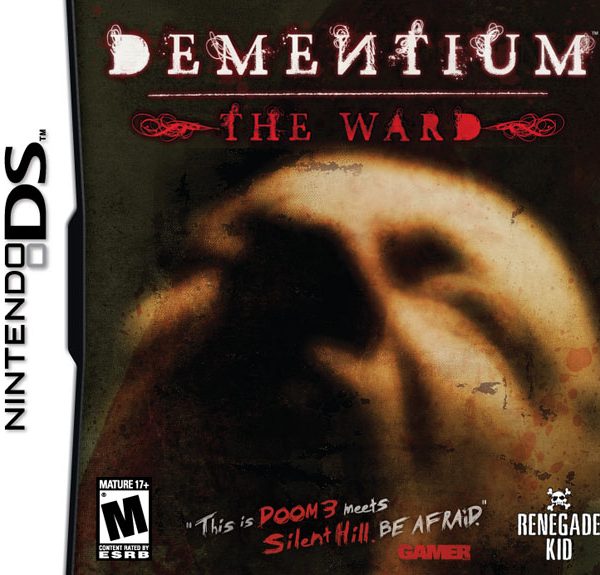 Author’s Note: This review was originally published on June 9th, 2008. Egads. This is still one of the worst games I have ever played. If I were to review this game again, the only thing I’d do differently would be removing the “witty” taglines.

Games are frustrating for one of two reasons. The first is because there is a challenge. The developers wanted to test your gamer skills and see if you truly are a master. Shinobi, Devil May Cry 3, Resident Evil 4, Ninja Gaiden and other action games of that sort are in this category. Yes, they are hard, but they are the good kind of hard. The second reason why games are frustrating? It is because they are terrible and have awful, awful design. Nano Breaker, Tower of Druaga, and Red Ninja fall into this category. Dementium: The Ward for the Nintendo DS falls into the second category, as well. This game was so busted, I nearly pulled my hair out during some of the parts. This wannabe survival horror game should avoided like the plague.

Left in the Dark.
Dementium starts off with your unnamed protagonist waking up in a hospital room. The entire facility is coated with blood and guts, you have no idea how you got there, and it is overrun with horrific creatures. It is up to you to get out of this hospital alive, and more importantly, figure out why you were there to begin with.

In any horror game, I play strictly for the storyline. The story starts off excitingly promising. The idea of waking up in a scary hospital sounds like the perfect idea for a great horror story. Unfortunately, the story is very cryptic and lacks cohesion. Unlike games such as Silent Hill or Resident Evil, you could very well not know what is going on when you finish the final battle. I know I was confused. The developers were not clear enough in describing why exactly you were in the hospital, and why you have to get out. Sure, you will see a few cut scenes that appear to be flashbacks, but they can leave you more confused. This is one of those games that lets you decide the conclusion. Sometimes this works, but in Dementium, it does not.

Floor after Floor after Floor.
Graphically, Dementium is impressive for a DS game. Unfortunately, it is also redundant. The entire hospital looks the same no matter where you go. “Hey look, more blood on the detailed walls! I haven’t seen that since I first started playing! And look, realistic looking debris every which way and blocking my path!” Those are a few of the things you might say if you were to trudge through this mess. The graphics look good, but they lack originality.

The monsters are the same way. The first time you see a zombie or a leech might startle you, but after a while you will grow tired of them. Like most horror games, there are only a few types of monsters. In the end, the graphics in Dementium are good but overused. I understand that the entire game takes place in the same hospital, but some different designs would have been welcome.

Shrieks! Screams! Shattered Sounds!
A key part in any horror game is the sound and atmosphere. The screams of zombies, the shrill screeches of banshee heads, and the scuttling of roaches makes the game more horrific and more lifelike. However, these same sounds got on my nerves. When the same foes continue to make the same wails, you might get a bit annoyed after a while. I sure was, because the sounds went from scary to bad in mere moments. In fact, I almost turned down the sound at some points. This was especially true when I wished to use the electric buzz saw. Luckily, the voice acting and the sound of the thunderstorms were excellent. With the music, you are given the option to keep it or not. Since it is preferable to have no music in survival horror games, I turned it off to add to the effect.

Save Yourself!
While I do play a horror game for the story, good game play helps move things along well. Take Resident Evil 4, for instance. This game had great game play and a great story. Not all horror games are like this, but I am able to get over it as long as there is no tank-like control scheme. In Dementium, there is a tank-like controls scheme. You use the stylus to adjust where you are looking and the direction you are heading. You also use it to solve interesting puzzles, show your map, and chose your weapon. The control pad is used to move. While you can move in four directions, your line of sight remains the same. This is why I only used the up button and changed my direction with the stylus.

When you get to something of interest, you will either automatically pick it up or you will be prompted to open it using the touch screen. Doors, memos, and other key items will use this prompt. An odd feature of the game is the note pad. Instead of holding various pieces of paper, you can use the stylus to take notes about solving puzzles. I am unsure why this was so, but it did not matter in the long run.

For actual combat, the game tends to flop. Your hero is not a fighter by any means, and he cannot take too many hits. However, I question why he is so proficient with a variety of firearms. In any case, you use the touch screen to select your weapon and the L button to activate it. Unfortunately, when you use a weapon you put away your flashlight. This item is key because about 90% of the areas are dark. Clearly, you would use a flashlight to see things, but when you pull out a weapon the light is gone and you have to rely on what little light the hospital provides. Your cross hairs are very tiny and things get hectic when trying to aim. Another downside of the combat is that monsters re-spawn if you reenter an area. The monsters in horror games need to have surprise, not predictability.

Thus far, the game seems like it would be decent. However, I did not go over the save system. In most horror games, you have a save spot. In Dementium, your game automatically saves each time you enter a door. This way, if you turn it off, you can start at the same location. Sounds nice, right? However, what happens if you die? Let me answer that for you, because you will die. Whether it is from some cheap attack by a boss or a swarm of flying banshee heads, you will be seeing the game over screen often. Actually, bosses have a tendency to show no mercy on you unless you use cheap tricks.

But back to the question of what happens when you die. Well, let me start with the fact Dementium is divided into chapters. Each chapter can be considered a level or a stage. If you get a game over, you start the E-N-T-I-R-E chapter over again. That’s right, all of your hard work must be done once again because the fine folks at Renegade Kid decided to implement the most moronic save system ever. “But wait Kashell, that was how it was in Shinobi.” True, but remember what I said in the introduction? Shinobi is the fun type of frustrating because the combat is fun. The combat in Dementium? Not fun. Also, Shinobi is an action game, not a horror game. FURTHERMORE, if you died at the boss in Shinobi, you would start over AT the boss.

Going through the level over and over again on account of a cheap boss or a few enemies is annoying beyond belief. Not to mention, you cannot carry any health or ammo with you. All you do is pick them up and use them on the spot if you need them. If you have full health, you are unable to carry extra health items with you. All of these features in Dementium make it an absolute abomination to play. However, the save system happens to be the worst of them all.

Wait, That’s It?!
Despite my constant getting a game over and backtracking through the same stages time and time again, I managed to finish this game in only four hours. After the final boss died, I saw the end sequence and said to myself, “Wait, that was it?” Seriously, this game was short. Then again, it was probably good that it was short because of the terrible save system and combat system. Regardless, there is no reason to play through the game a second time. Even if the game play was fun, the story has no foreshadowing at all.

No Award for The Ward.
An interesting thing about Dementium can be seen in the instruction manual. The publishers of the game, Game Cock, say that they did not make this game. They give the appropriate credit to the game development company: Renegade Kid. Obviously, Renegade Kid designed this mess. However, I found it hilarious that Game Cock gave all the credit to Renegade Kid from the very beginning. Never before in any instruction manual has the publisher said who the actual developers were in designing the game. With the way I read this statement in the manual, it sounded like Game Cock said, “Trust us. We WERE NOT responsible for making this game. We just published it. Seriously.” Well, that was my take on it. And this review was my take on Dementium: The Ward. This game had the potential to be a great addition to a horror fan’s library, but it turned out to be horrific for all the wrong reasons. Sure, parts of the game are chilling, but the game’s entire capacity has too much wrong with it. As I said, the game takes place in a hospital. I can’t help but wonder if the people at Renegade Kid should follow suit and put themselves in a hospital.