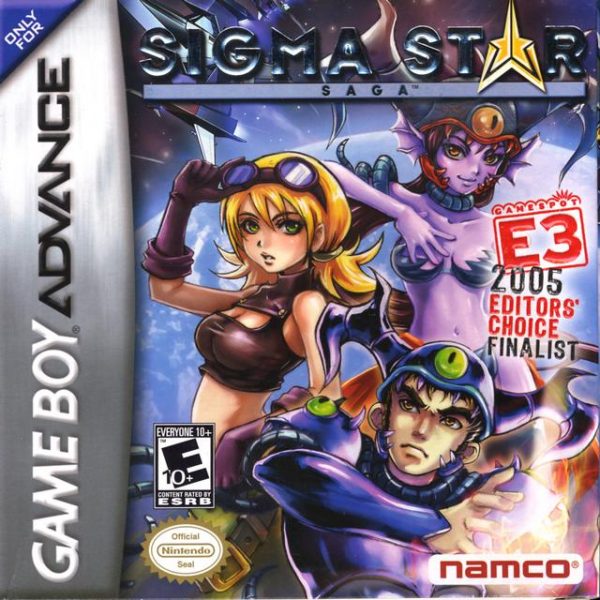 Mixing genres together is rarely a good idea. Remember Samurai Showdown as an RPG? Yeah, that was a bust. Many others have been as well. While an original story and world, Sigma Star Saga for the Game Boy Advance is almost able to successfully combine genres into a tiny package. There is some potential from this Namco sci-fi title. Despite this promise for what could follow, Sigma Star Saga has a hard time measuring up to the different genres from which it draws inspiration as well as being a solid game. Still, for what it is, you get something unique that you can play on the go.

Sigma Star Saga takes place in the future. Planet Earth is in bad shape due to the alien race called the Krill. As cadet Ian Recker, you lead a bunch of pilots to a victory against the Krill and return a hero. You also return as a sacrifice. Your new mission is to perform reconnaissance inside the Krill base and expose their tactics from the inside. In lieu of body armor, Ian dons a parasite that transforms him from human to killer Krill. Now Ian has to decide where his loyalties lie as he sees two sides to this war. With planet jumping, alien races and plenty of space travel, Sigma Star Saga tells an exciting plot that is fun to see unfold. While plot twists and character development are lacking, the setting of outer space is always fun for a story-driven game.

Advancing the story is where problems come into play. Remember how I said mixing genres is rarely a good idea? Well, Sigma Star Saga is one reason why. Ian can talk to folks and customize his parasitic armor on the home base. You’re given a decent amount of options to customize Ian, as well as his ship that he uses in battle. When you’re on foot, Ian has a laser shooting hand gun and attacks enemies with the push of a button. Fans of games like Alundra or Zelda will enjoy this, but Ian runs at a slow pace and doesn’t perform aptly like the two elves mentioned. The slow pace is then hindered by random battles. Technically, you’re already battling. I guess I should say that there are two methods of fighting off alien menaces.

Ian’s screen won’t break or turn black, soon revealing a top down view with turn-based menus. No, instead, you’ll be controlling a spaceship in side-scrolling, 2D shooter type game play similar to games like Ikaruga or Gradius. Now, I want to make something clear: I get nostalgic thinking about the olden days. About getting a quarter from my mom or dad, going to the game room at a local pizza parlor, inserting the aforementioned quarter into the red slot, and trying to beat my high score in games like these. Once my ships ran out or it was time to eat, I would stop. Either way, I enjoyed my time but I knew when enough was enough. That’s the biggest problem with Sigma Star Saga: there is never enough. Ian will be walking while merrily blasting a foe, and then he gets transported to his ship to do battle. There will come a point when you’ll say, “Enough is enough! I want to get on with the story!” Random battles have never been so fun and yet so annoying before Sigma Star Saga. Despite the huge variety of data and weapons you can use, it gets old. Backtracking is an absolute nightmare.

At least while sauntering around, you get to look at some lovely graphics. The sprites are vivid, colorful, detailed and surprisingly large. While blasting crap into space dust, you will see some inspiring stages and enemies. Anime portraits take up dialogue boxes during the multiple conversations that advance the plot, and the variety of monsters you face leaves little to be desired in the graphic department. The music and sound almost hit the nail on the head. The songs fit right in with the space setting. All of them sound futuristic with the right amount of synthesizers and techno beats.

Sigma Star Saga lasts 15 to 20 hours, features a new game plus option and has endless customization. If not for the fact that the “random battles” weren’t so random, the game would be a winner. The idea of mixing outer space, aliens and a conspiracy with top-down action, 2D side-scrolling shooting and anime influence would be the right recipe. During the mixing, it seems that the proportions of ingredients were muddled and the result was Sigma Star Saga. It’s a beautiful game and has clever ideas. Unfortunately, the tedious battles make the finish line seem not worth it. Unless you can’t get enough 2D side-scrolling action, then I say check out something else.