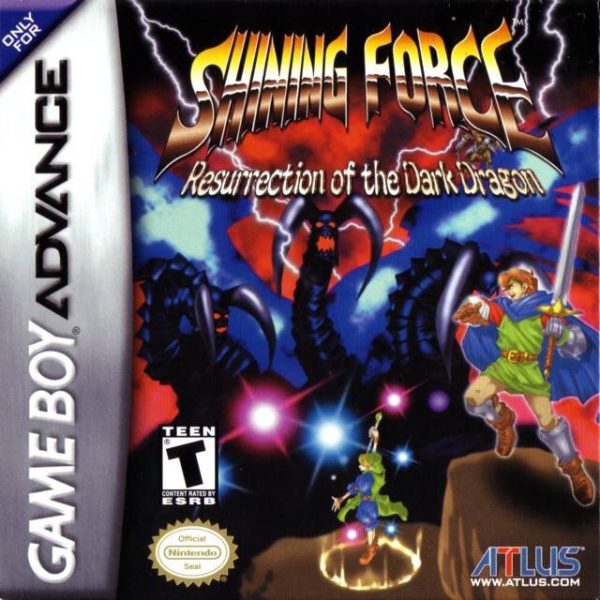 Author’s Note: This review was originally published on June 28, 2004. I remember playing this game while I was on a summer trip with my family. A few hours before the trip ended, I couldn’t wait to get home and write a review for it. To this day, I still find it to be one of the more enjoyable games in the Shining series.

Back when the Game Boy Advance was released, RPGs were few and far between. I remember counting down the days until the re-release of Breath of Fire for the system. Today, people need to start working over time in order to have enough money to purchase all of the RPGs for the GBA because so many continue to get released. Shining Force: Resurrection of the Dark Dragon is the latest quest to be re-released and things continue to look up for the RPG player. If you need something to occupy you for those long drives during the summer break, pick up this title. Combining old-school goodness with new-school tweaks, it all comes together for a pleasing title.

Story: 7/10
The land of Rune has been governed by peace for many years after a war ended between the forces of light and dark. At the present time, King Ramladu of the Runefaust kingdom has been manipulated by the dark magician Darksol. His motives are to resurrect the awesome dark powers in hopes of claiming all of Rune as his own. In the country of Guardinia, a young orphan with no recollection of his past named Max is training with his tutor, Varios. When news arrives of monsters attacking nearby ruins, Max knows that he must get rid of them. He forms an army of other warriors and together they are the Shining Force that fights for light.

This title definitely screams cliche like no other with the common battle between good and evil, and a hero with a forgotten past. You have to remember that this was one of the first strategy RPGs released for a commonly owned system. Therefore, it has a right to be cliche. That’s fine with me. I didn’t like, however, the way the dialogue carried out. I wasn’t expecting any Xenosaga conversations, but the things that the characters said to eachother were lame and just made you hit the A button that much faster. As far as characters go, the main character is the one you can see develop throughout the entire game. The rest of the team you learn about as you talk to them at your head-quarters. Tao will tell you about her child-hood tragedy, Gort will talk about the battle between him and a giant monster, and Guntz will talk about the way his power suit works. I thought it was pretty cool to hear each character tell his story, but Max’s tale you learn through game completion. Overall, the game needed to be edited many times over to really get a more present and sophisticated dialogue.

Game Play: 6/10
You control Max as he walks (quite quickly) around the towns and world map. You can talk to NPC’s, open up chests for items, buy new equipment, and save your game at the Church. A new thing to do is search for Cards. Mawlock, a new character to the game, uses Cards as weapons. So, you got to check thoroughly. Each character can hold four items along with their equipment. Navigating through the item menus is a really cumbersome task. Going from one character to the next and then searching the Item Box for another item gets tedious after a while. Early on in the game, it is necessary that the characters be given items. Later in the game when healing magic is widely used, this won’t be such a problem. When you go to head quarters, you’ll need to talk to the strategist, Nova, who will give you advise for the next battle, hold your money, and allow you to pick your team members. There aren’t any mini-games, so you’ll be walking about towns looking for things most of the time.

Battles: 8/10
Like most strategy games, you are on a battlefield in which each character can move to a certain position. You’ll be given victory conditions and the Bonus conditions. The bonus is usually extra cash. These are obtained by clearing the battle within a certain number of turns. All characters can attack when next to the enemy. Depending on the weapon, some can attack farther away. Magic can be used as long as the person is in the range. As the mage levels up, the spell power and range levels up. When you take action, the view switches to a one-on-one viewing of the battle. It’s pretty cool to see close-up shots of your characters kicking the monster’s ass. At first, the battles are a real pain because the battle fields are tiny. Here is a problem I frequently encountered: The first person to go would be Hans. He moves up, attacks and that’s the end of it. Then, the monster moves closer. It’s my team’s turn again. Gong wants to attack that monster, but Hans is in the square that would allow him to reach it. The other three positions are either blocked by OTHER characters or monsters so he just has to move around somewhere and defend. These types of messes occur because Agility is what determines who attacks first. While it does add some strategy to who should move where, you’ll probably prefer to just kill as many monsters as possible in order to get the clear bonus. Eventually, battles become easy because you’ll get plenty of characters to choose from, and levels are gained very easily. One awesome feature is when certain characters reach level 10, they can be promoted to a new class. So a Knight will turn into a Paladin. While they start back at level 1, most of their stats are the same so by the time they gain a few more levels they’ll be mega power houses. In the end, the battles are basic but fun. They do get annoying at first with tiny fields, but stick with it and things will get better.

Graphics: 9/10
Very nice in this department. While the character sprites in town and such lack any sort of actions other than their cute little walking in place, they were drawn very well and have detailed outfits. During the battles, the large shots of the characters are very cool. They have even more detail than the tiny sprites and they move according to the chosen action. The weapons change depending on what is equipped, and the spell affects are also a nice sight to behold. The graphics were greatly improved from the first one.

Music and Sound: 6/10
The sound track is just your average Game Boy Advance soundtrack. The music does get repetitive, but it’s bearable. Hell, I remember having a few of the songs stuck in my head sometimes.

The sounds are the same way: average. They do get a bit annoying, but that’s where the volume down button comes in. A very cool customization feature is that you can choose the balance between music and sound FX. This way, you’ll find the sound that’s right for you.

Replay Value: 4/10
There are many characters to recruit and chances are you’ll miss a few cards. Those are about the only two reasons to go back for more because the story is even more predictable and cliche the second time through. It is a short game so you may be able to play through it twice in a month or so. I’ll most likely play again.

Buy or Rent: Buy
Shell out the money and buy this game. For a summer RPG, it’s great. Game Boy Games don’t typically cost too much anyway, so you won’t empty your wallet. It is well worth the money.

When you average the scores I gave for each category together, you don’t end up with the final score of 8/10. Overall, the game deserves an 8/10 because it is just plain FUN. It’s an enjoyable game to replay if you’ve played the original version. It is also great for those who’ve never played the one for the Genesis. Sure it has it’s problems, but when you realize that you’ve just drained your batteries after playing the game for hours on end, you’ll over look the problems and enjoy saving the world once again.