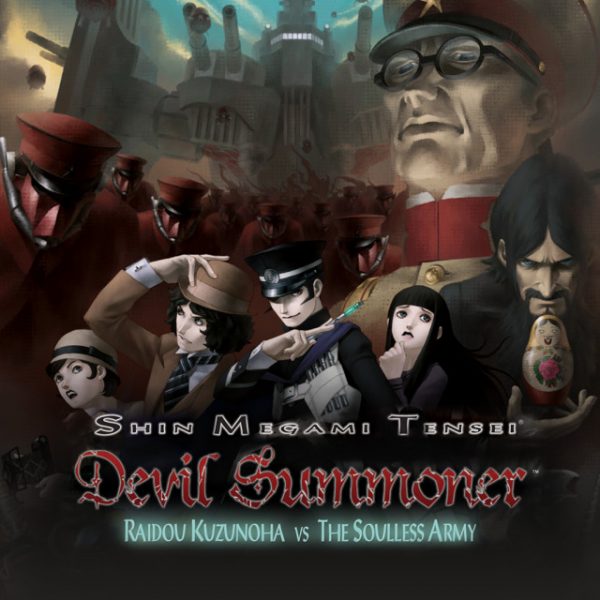 That title is a mouthful, am I right? Welcome to another review for another game in the Shin Megami Tensei series. Like its brethren on the PlayStation 2, I went into Shin Megami Tensei: Devil Summoner: Raidou Kuzunoha vs. the Soulless Army (referred to from now on as Devil Summoner Raidou) with cautious optimism. I knew that there’d be some difficulty, a high encounter rate, a captivating setting, and plenty of demons. I was right about it all.

The game takes place during in the fictitious year of Taisho 20 in Edo. Japan is in an interesting point in history as its slowly shunning the ancient traditions of the Shogun Era and adapting to western culture and technology. Shouhei Narumi, a detective, receives a call from a young girl named Kaya Daidouji. Narumi asks his best part time worker, the Devil Summoner Raidou Kuzunoha the 14th to come with him to see all the hubbub. The girl asks the two detectives to kill her, but she ends up getting kidnapped by shady figures in red armor. Now, Raidou and his cadre of demons need to save this lass and figure out the meaning behind her grim request.

The premise of Devil Summoner Raidou is wonderful. It’s the Roaring 20s in Japan, Raidou works as a detective with the ability to summon demons as assistants, and the damsel in distress requests that she be killed. These aspects come together to create a unique narrative in an era that doesn’t get enough screen time in video games. Atlus captured it beautifully; it’s a gorgeous looking game that is complimented by a jazzy soundtrack. Unlike Nocturne and Digital Devil Saga, Raidou’s journey is filled lighthearted moments and silly humor. The dialogue is written to show crass 1920s lingo. Raidou might be a silent protagonist, but an impressive roster of characters do enough talking for him.

Tantamount to the era its portraying, playing Devil Summoner Raidou can be gritty; oftentimes unpleasant. There are some good points, but they can be hard to appreciate. As Raidou, players will go through twelve episodes as they get closer to the truth. It feels like Atlus wanted to put in every hurdle imaginable to prevent Raidou from getting there. Navigating through 1920s Japan, Raidou will have to gather clues from the townsfolk. Investigating the proper NPCs for clues sounds neat, but finding the right one can be a struggle if you don’t have the right demon. Raidou can bring out a demon to read minds, fly to hard to reach areas, or even set someone on fire to get a clue. But, if you don’t have the right demon for the plot trigger clue necessary, then you need to either recruit one or fuse one. Demon Fusion offers plenty of possibilities to build an army of destruction. The bad news is that it’s risky using it since you might lose a demon that has a necessary Investigation Skill. Recruiting a demon requires you to find the right one in a battle. Either way, momentum can get stalled.

This brings us to combat, which is the area that has the most issues. No surprise to anyone who’s familiar with the series, the random battles occur at a high frequency. However, what might surprise you, is that Devil Summoner Raidou features muddy action/RPG combat. Raidou has a sword that lets him perform a three-hit combo, a forward thrust, and a circular attack. He has a gun that can be loaded with a bevy of different bullet types. Finally, he can guard with the X button and use items. Being a Devil Summoner, he can summon one demon at a time (controlled by the AI or by your input) and switch them on the fly at the cost of magnetite. To recruit new demons, he’ll need to break it down with its elemental weakness and perform the Art of Confinement ( i.e. mashing O as fast as possible). For the (many) random battles, this is mostly innocuous. Sometimes, it can be fun. Raidou and his demon can work in harmony to perform a satisfying combination skill that really lays on the hurt.

But then, there are some battles that really test your patience. More specifically, the boss battles. These are something I always look forward to in an game, but Raidou’s bosses are on a different level. Most of them have insane power, agility, and attacks that can’t be dodged/blocked. Combat is clunky enough as is, and boss battles end up being chores. If Raidou bites the bullet, then it’s game over. There’s other little things about battle – slowdown, crowded fields, and ammunition running out quickly. Those issues wouldn’t be so apparent if the blueprint was smoother.

When the battle ends, you’ll get experience, money, and magnetite. When Raidou gains a level, you can add a bonus point to one of his base stats. When a demon gains a level, it might learn a new skill or gift an item to Raidou. Demons also gain loyalty after battle. When this gets to max, it can be used in Demon Fusion. Besides experimenting with Demon Fusion, there are bonus dungeons, hidden secrets, and side-quests that you can do to take a break from the investigation. After exploring as much as possible, I was able to finish Raidou’s journey in only 22 hours. Finishing the game once unlocks a harder difficulty, but there’s no way I’ll be checking that out. Combat’s issues were too numerous to even entertain the thought of going through the game again with more of a challenge. But, despite the issues, I’m glad I went through Shin Megami Tensei: Devil Summoner: Raidou Kuzunoha vs. the Soulless Army. If you’re an RPG fan, then come for the setting and the demons. Hopefully, you can put up with the combat long enough to stay.

Overall, 5/10: Cumbersome combat in the coolest capitol. Raidou Kuzunoha the 14th has his work cut out for him.