The eye sees all in AI: The Somnium Files. 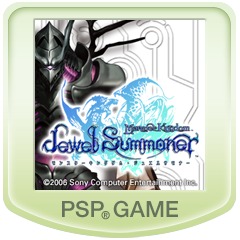 What would you expect from a game with a name like Monster Kingdom: Jewel Summoner? A game that takes place in a magical kingdom run by monsters? A simulation game where you run a jewelry shop? A combination of the two? Something different? I didn’t know what to expect when it was first announced in 2007. This RPG from Atlus has you and your party collect monsters that do battle with…other monsters. Think of Pokemon, but with the edge of a suburbanite teenager. Jewel Summoner is fun, but feels like a wasted opportunity.

Long ago, monsters and humans lived in harmony. An event called the Great Disaster destroyed that harmony when it seemingly erased monsters. They were actually sealed in jewels that radiated tremendous energy. The humans harnessed that energy to rebuild. This energy is now known as Jewel Power. Civilization is rebuilt, but new threats loom. Creatures called Abominations are controlling monsters to terrorize humans. A young man named Vice lost his mother to an Abomination. Now, out for revenge, Vice finds himself among a group of warriors called Jewel Summoners that fight Abominations with their own monsters.

The story has a cool premise. Things really start to look like they’re going somewhere when Vice gets to choose from two other Jewel Summoners to join him on his quest. Sadly, none of this goes anywhere until the very end of the journey. No matter who you select as Vice’s companions, the fully voiced dialogue remains about the same and the characters go through little growth. I didn’t mind this, because the companions I chose for Vice (Grey and Elly) are hilariously awful. But, RPG fans may expect something beyond everyone’s one dimensional character type.

Vice and his friends will travel the world righting the wrongs caused by Abominations. Navigation in towns and the world map involves a simple point and click interface. You can chat with NPCs, as well as shop for items and accessories. In dungeons, you take control of Vice as you navigate labyrinthine mazes. Over the course of the game, Vice will learn field abilities that let him reveal hidden paths, trap monsters, detect items, and more. They add some color otherwise tedious traveling.

Dungeons can be tedious because the encounter rate is very high. You can expect to get into battle anywhere between three and ten steps. I usually enjoy the combat, but back to back random encounters is irritating. One of the good things about dungeons is that they house plenty of treasures and save points. As an added bonus, these save points fully recover your team and allow you to warp out of the dungeon if you need a break.

Vice and his friends can hold up to three monsters each. With the ability to have a party of nine monsters ranging in shapes, sizes, elemental affinities, and abilities, it sounds like Jewel Summoner’s combat would require strategy and careful planning. That’s half true. During the start of the game, you’ll have access to only a few monsters. You can capture new ones by weakening them in combat and capturing them in an associated elemental prism. Your monsters and the enemy monsters will exchange blows back and forth in turn-based combat. Using an action requires Jewel Points. If a monster runs out of JP, then it’ll get switched. Vice and his two teammates have to worry about their Life Points. The only way LP increases is after Vice’s Summoner Rank goes up, which is a reward for getting further in the story. The key to success during the early parts of the game is to attack your foe’s weakness to delay their turns while being cautious of the enemy doing the same to you.

After a certain point, Vice and his friends will be an unstoppable army. Sure, monsters will level up, learn new abilities, and gain a boost in their base stats after enough battle experience. But, to really build a team of terror, you can take advantage of Jewel Summoner’s most interesting feature: Amalgamy. With the assistance of two Jewel Meisters, you can use Amalgamy Points earned from combat to level up your monsters, reinforce their stats, and/or increase the power of their abilities. But, wait! There’s more. You can fuse your monster with elemental quartz to learn new abilities and gain more ability slots. But, wait! Again, there’s more. After enough fusions, your monster can evolve into a new, more powerful form. There comes a point where you’ll be swimming in Amalgamy Points after a few battles. What does all of this mean? It means that combat goes from strategic to trivial.

There isn’t much to do outside of the main quest other than playing with Amalgamy. Finishing the game doesn’t take long, either. I was able to see the credits after 25 hours. A bonus dungeon was unlocked, but combat got so repetitive that the thought of doing more of it didn’t sound fun. Monster Kingdom: Jewel Summoner isn’t bad. It has beautiful graphics, great music and voice acting, and it has moments when it can be enjoyable. But, it’s filled with wasted opportunities. Even if the game wasn’t so easy, there could have been more with the narrative and the character development. It’s hard to think of anyone who would enjoy all Jewel Summoner offers. I’m glad I played it, but I’m won’t be surprised if others don’t.

Overall, 6/10: It’s could have been a brilliant combination of Pokemon and Shin Megami Tensei. Instead, it’s another RPG that won’t be remembered.