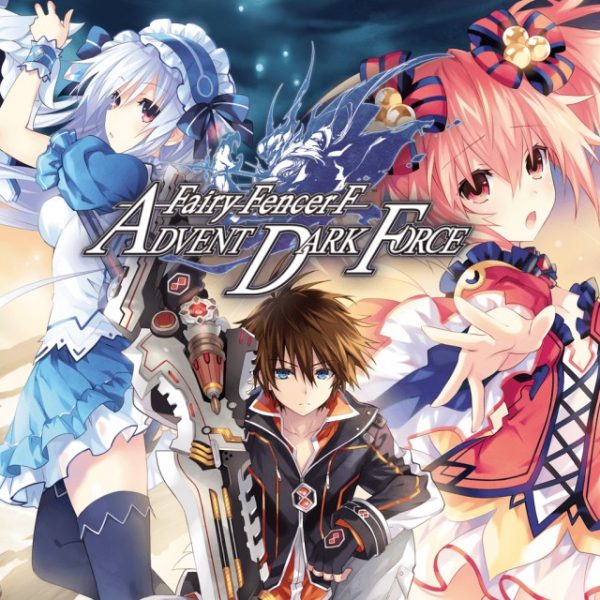 Fairy Fencer F: Advent Dark Force is quite the title. To match the title’s wordiness, there’s a lengthy story with multiple endings and a wonderful cast that always has plenty to say. An enhanced version of Fairy Fencer F on the PlayStation 3, Advent Dark Force is a solid game from the creators of the Neptunia series. Honestly, I had low expectations for it given Idea Factory’s track record at the time.

After the lovely opening movie, the Idea Factory/Compile Heart brand becomes instantly apparent with the game’s presentation. Once again, the majority of the story events unfold in an animated, talking head style. The character art is beautiful, but it can get stale. Battles (more on those later) thankfully offer much more flash and color. The music is a delight. It gives the game an exciting, anime feel that really fits with the game’s themes. The game is fully voiced with an English or Japanese option.

Years ago, there was a battle between the Goddess and the Vile God. As all-powerful beings do, the two deities had their subjects fight for them with specialized weapons. At the end of the conflict, both were sealed by the same weapons they granted their subjects. In the current era, these weapons are called Furies. Within each Fury is a fairy that has magical powers. When a Fury is activated by someone, they become a Fencer. The hero of the story, Fang, unwillingly becomes a Fencer when he meets the fairy Eryn. Eryn needs Fang’s help to revive the Goddess, but Fang would rather eat and sleep. She bribes Fang with the promise of one wish if he helps her. Advent Dark Force’s story is usually filled with comedy and silliness, but there are a few serious moments thrown in. It’s the characters that really make the narrative special. Along with Fang and Eryn, there’s a muscular fairy that loves to bake sweets, an assassin that only communicates with the word “kill”, and a stuffed animal-like creature with a sword stuck in his head that speaks like an elder. It’s a wonderful cast of characters.

The base for Fang and his friends is the Sunflower Inn, which is in the city of Zelwinds. The town has a pub where you can chat with locals and accept side-quests, and a shop that allows you to purchase and synthesize goods. At the inn, Fang can chat with party members to learn more about them. More importantly, Fang and his friends can enter a mysterious space where both the Vile God and the Goddess are sealed. With the help of the Furies, they can remove the weapons sealing these deities. Not only will this power up the Furies, but it’ll determine which ending the player receives.

Outside of Zelwinds, you will explore dungeons in an attempt to find more Furies. Dungeons are where the real fun lies. With the World Shaping feature, you can influence your exploration by altering enemy/player stats, battle rewards, and even the types of enemies that appear. All dungeons are are filled with hidden treasures and items. Most importantly, enemies are running amok and are eager for a good fight. This is where Advent Dark Force’s combat system comes into play.

When a battle starts, the turn order is displayed on the left and your party’s information is on the right. Party members can execute a combo attack, cast magic, unleash a skill, use an item, guard, or activate their unique ability. Characters have a limited range of movement, and each of their attacks have a designated area. With the right positioning, multiple enemies can be walloped with over the top attacks that fill the screen with numbers hard and fast. As damage is delivered, a meter will slowly fill up. Once full, a character can gain an incredible boost in power with the Fairize option. A dramatic transformation will play as characters get geared up with oversized armor. I always looked forward to a new dungeon because it meant more zany and fun combat. The fun doesn’t stop when you finish the battle, either. Along with cash and experience, you’ll gain Weapon Points. You can use these to power up your character’s base stats and learn new abilities.

One aspect of the combat that I was worried about – something notorious in an Idea Factory production – was balance. In other words, I was worried if the enemy strength would outpace my team. After all, bosses have multiple health meters and are capable of using a powerful Hail Mary attack when their energy gets below a certain threshold. I saw the Game Over screen a few times, but I never felt the game was unfair. The momentum never stalled. If things get really arduous, then take comfort in knowing difficulty levels can be changed at anytime.

Actually, “comfortable” is a good way to describe Advent Dark Force. The game does have issues. Along with some balancing, there are some story events that can get too wordy, camera issues, and a few technical input hiccups. Those aside, Advent Dark Force just feels good to play. There’s a cozy feeling that comes with watching Fang and his crew do their thing. To top all of it off, there’s a wonderful New Game Plus feature that will make future files more enjoyable. Even if you aren’t a fan of the Neptunia franchise, you should still consider Fairy Fencer F: Advent Dark Force. There’s a lot of good stuff behind that super-long title.

Overall, 8/10: Fairy Fencer F: Advent Dark Force is a mouthful of a title that is worth the time to both say and play. Idea Factory and Compile Heart are continuing to improve.