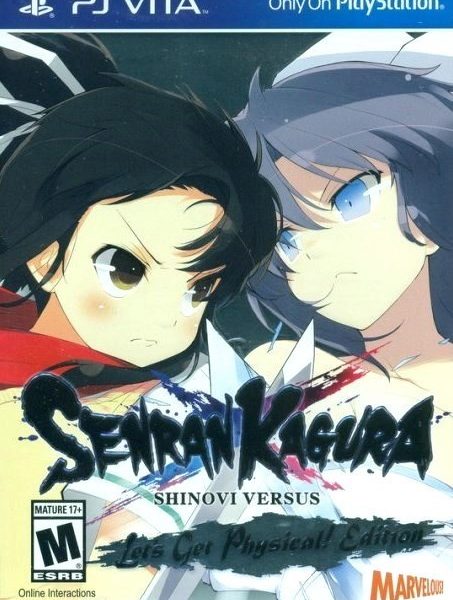 The Senran Kagura series has been around for a few years, but I never paid it much attention. I’m not sure what the deciding factor was that lead me checking out this entry in the all-female slugfest, but I took a dive with Senran Kagura: Shinovi Versus. I am so glad I did, because when you decide to look beyond the shiny decolletage, there is actually a fun game that has lots of content. Some might call this series exploitative, some might call it immature, and some might call it perverted. I recommend looking at this game as a fun action title and just having fun with it’s nonsense.

The world of Senran Kagura revolves around female high school students that are training to become kunoichi. There are four schools in Shinovi Versus, which is actually a sequel to Senran Kagura: Burst for the Nintendo 3DS. The four schools are the Hanzo National Academy, the Hebjio Clandestine Girls Academy, the Gessen Girls Academy (new to the series) and the Crimson Squad. Each school’s top five students have challenged the others to fierce battles in order to reign supreme. It’s a simple excuse to have a brawl with fierce females. One of the problems with the story is that it plays in one of two ways. The first is you seeing the girls interact with each other. It’s basic, but it works. The second way is having text display across a still image. It’s a real downer when it plays this way. Chances are you’ll want to speed things along and get to the action when the story segments begin dragging. The overall plot…err…story isn’t much, but the huge roster of unique characters more than makes up for it. There are tons of characters you’ll get to know. Each one has a story to tell and it has been fun getting to know this huge group of femme fatales. I give XSeed lots of credit for fully developing each one with their great translation of the script.

Shinovi Versus has a variety of game mode. The one that you’ll be spending the most time with is Story Mode. From the main screen, you will pick a school and go through its chapters or you can select the individual story of one its students. Shinovi Versus is flexible (tee-hee) in that you can play any way you like. When you finally select what you want to do, you will take control of one of the many girls and enter the battle field. Shinovi Versus feels and plays similar to Dynasty Warriors. Your girl is faced with swarm upon swarms of enemies followed by a boss. You get to take them down by performing frantic combos and stylishly revealing special attacks. The square button is used for weak attacks and the triangle button is used for strong attacks. Starting an attack with the triangle button unleashes your character’s unique Breach Art. These can be charged for extra damage and for breaking enemy defenses. You can also dodge, double-jump and parry enemy attacks. One of my favorite things to do in combat is to send an enemy flying in the air with a combo and then pressing the O button to follow it and continue the assault. These are called Aerial Raves and they are always a sight to behold. Each girl has access to three modes of combat: Flash, Yin, and Yang. Flash Mode is considered the standard mode. With the push of a button, you can transform your girl into their ninja outfit. This is called Yang Mode. Yang Mode opens up new combos and allows you to use a character’s Secret Ninja Art. The downside is that you can’t perform as many Aerial Raves. Finally, you can strip the girl of all of her outer clothing and have her fight in her bra and panties. This is known as Yin Mode, and it’s probably the most entertaining way to take down foes. While the attack statistic is higher in Yin Mode, the defense statistic suffers greatly.

Combat is frantic and fantastic. When you are battling another girl, dealing damage will slowly strip away their clothing. By the end of the battle, your opponent might be naked as a jaybird depending on how you finish them. Of course, your girls’ clothing can be stripped away just as easily if you don’t pay attention and guard appropriately. The controls are tight and responsive, but there is one issue: the camera. There are times when things get too crazy and the camera will get messed up when you try to track down an enemy. You can target an enemy with the push of a button and while it does help slightly, there will be times when your target gets lost in the shuffle. That said, it’s my only complaint with the combat. With so many unique characters wielding diverse abilities, the combat always remains fresh.

After a battle ends, you will earn experience points and money. Depending on which mode(s) you used during combat, they will earn growth points for that/those as well. The money you earn can be used to buy new outfits, lingerie, accessories, music, movies, images, sound clips and extra accessory slots. Every girl already has some style to accentuate their assets, but you can make them look how you like down to their undergarments with all of the goodies you could purchase. I guess it’s time I talk about the graphics. Before we talk about the game’s selling point, I will mention that this is a beautiful and bright looking game. The battlefields aren’t as varied as the characters or the special attacks, but they work. But, Senran Kagura’s selling point is that most of the females are unrealistically stacked. Indeed, there are lots and lots of breasts in this game. Huge breasts. And they move in the most unrealistic way I have ever seen in a video game. The M rating this game received is warranted, but don’t let that dissuade you from trying it out. Honestly, I enjoyed every aspect of the graphics because it added to the fun in the game. Accompanying these over the top graphics is a killer soundtrack. It sounds like a combination of Guilty Gear and Way of the Samurai. This means there’s lots of guitars, lots of oriental style and lots of energy. It’s the perfect fit for the game. The game is fully voiced in Japanese.

When I first started Shinovi Versus, I started with the Hanzo National Academy. Finishing this story on the default difficulty setting took only three to four hours. The credits rolled, but there was no way I was done. There are tons of other stories and characters to see, so seeing all of it, unlocking all of the goodies in the shop and uncovering every secret will take about 25 hours. There is also an online mode that lets you fight with or against other players. For those that are interested in earning 100% trophy completion, it might add another hour or two of grinding. Senran Kagura: Shinovi Versus is a game that’s not meant for everyone. Even if you’re a fan of action games, I would suggest asking yourself whether or not you get uncomfortable by the game’s over-the-top display of the female figure. I’m able to enjoy the game for all it’s worth. There are issues with the way some of the story gets told, the camera might mess up, and there are some longer loading times than expected for a Vita game. However, the vast amount of content makes it easy to overlook these flaws. And for some, the endless jugs in full display will make up for everything. Either way, my introduction to the Senran Kagura world has been enjoyable. If you’re looking for an action game featuring the fairer sex’s features, then this will be right up your alley.