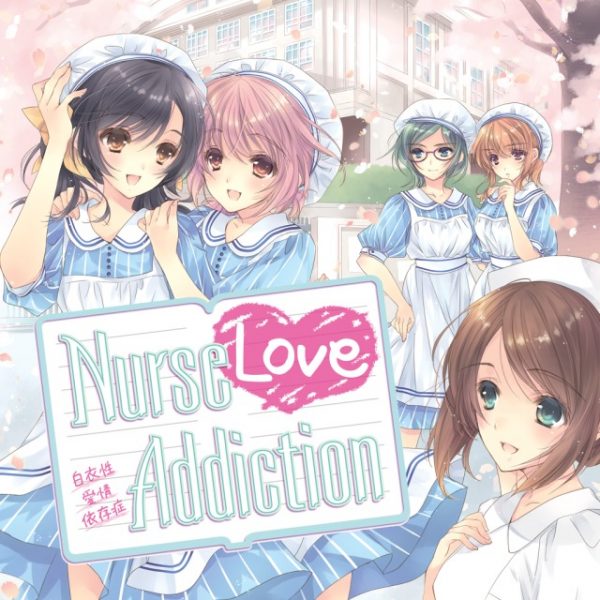 While I haven’t played many of them, every visual novel I have played featured a female lead that was tasked with weaving her way through an emotional journey leading to one of multiple bachelors at the end. The stories themselves ranged from high fantasy to something darker in tone, but at the center of all of them was a woman surrounded by handsome men. Nurse Love Addiction is slightly different from the others I have played. While you still play as a woman, the potential love interests aren’t males. Indeed, this is a yuri visual novel that looks like it wouldn’t offer much outside of some fan service. Now that I’ve finished one route and started up another, I can say that Nurse Love Addiction is a game with more than meets the eye. Sure, there are some scenes with some CGs that can catch you off guard, but Nurse Love Addiction has a story that gives you an opportunity to see a well crafted and heartwarming story filled with joy, sorrow, and love.

Nurse Love Addiction follows the escapades of Asuka Ohashi. Normally a carefree girl that dubbed herself the president of the Jellyfish Club, Asuka’s easy-breezy life abruptly shifts when decides to become a nurse. Now, enrolled in the Teiho Nursing Academy with her younger sister Nao, Asuka is about to experience the hardships and realities of what it means to be a nurse, and, of course to fall in love. Asuka is easy to cheer for. The moment she appears, it’s clear that she always does her best and wants to become the best nurse possible. Most of the story is spent watching Asuka attend classes and clinical practice sessions, taking exams, enjoying her days off and understanding the difficulties of caring for patients. Sprinkled within these segments are choices that will determine one of many endings, most of which cause Asuka to end up with someone. Nao, her sister is one option. Sakuya and Itsuki, fellow nursing students, are another two. The last one is Kaede, one of the academy’s instructors. While the cast is minimal, the level of detail and character development given makes up for it. Similar to what I imagine is a day in the life of a nurse, the story touches on every emotion imaginable. Other times, the story tends to drag its feet. Like any visual novel, Nurse Love Addiction has its moments where you’ll just want to skim the text so you can get to the next segment. Despite these bumps, witnessing Asuka’s trials and tribulations can be an enjoyable and upsetting experience at the same time. Nurse Love Addiction has a plethora of save slots. This makes it easy to make multiple saves in order to achieve the desired ending.

Outside of reading text and making a few choices, Nurse Love Addiction doesn’t offer much else in the game play department. There is a lot to read, but not much else that actually involves player interaction. It’s unfortunate, because the rest of the game is bare-bones. Asuka and the rest of the cast are beautifully drawn. Their portraits show a wide range of emotions. But, due to the limited cast, they will be all you see. The CGs are especially lovely, but they only show up during key moments in the story. The backgrounds are where the game’s visuals take a hit. They’re bland, dull and uninspiring. Again, you will be seeing a lot of them. For a game that had so much care for its characters and story, I was hoping to see that same level of care shown in the visuals. Luckily, the music slightly makes up for them. The tunes serve as easy listening most of the time, but a few of the tracks are peppy and jovial. The game is fully voiced in Japanese; there isn’t an English language option.

My first time through Nurse Love Addiction took about eight hours. There’s a lot of dialogue in this game; those that wish to see all of the possible endings are looking at a good 30 hours. The generous helping of save states and an option to blaze through text can save some time, but this is still a very wordy game. As you witness more endings, you will begin to unlock in-game bonuses such as new sound effects and a gallery. In comparison to the other visual novels I have played, this one is the most unique. One of the reasons is due to its yuri theme, but another reason is due to the story it tells. It has a believable narrative that takes Asuka through an arduous but rewarding era as she trains to become a nurse. Despite it’s lackluster presentation and some slower moments, I recommend giving Nurse Love Addiction a chance.

Overall, 6.5/10: Experience what it means to be an angel in training in this emotional visual novel.