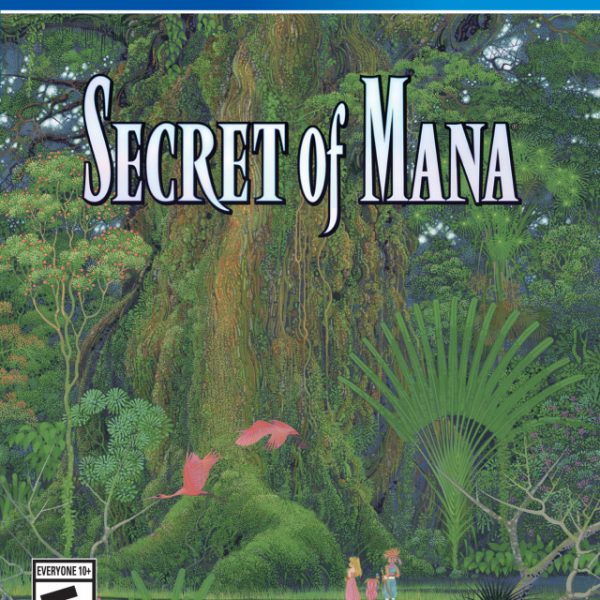 I’ll never forget the first time I heard of Secret of Mana. I was waiting in a K B Toys in a mall; patiently waiting for my mom to finish clothes shopping. While she rummaged through the latest fashions across the hall in the Ann Taylor, I was looking at all of the Super Nintendo games for sale. I immediately stopped at Secret of Mana because of its gorgeous cover art. You know what I’m talking about: the three, tiny looking heroes standing in awe as they gaze at a tree the size of a continent whilst being surrounded by pink birds and verdant flora. Yep, that cover. After reading the back of the box, I knew. I knew that I needed this game in my life. My time to play the game occurred about two years later when I was at a friend’s house. He popped in his copy and I watched in amazement as he rode a white dragon towards a flying, mechanical fortress. He took down a deranged vampire and a hungry slime while some foot-stomping music played in the background. Noticing my wonderment, he generously lent me his copy. From that point on, life was all about Secret of Mana. Before and after school, I was playing it. When I wasn’t playing it, I was thinking about it. And that wasn’t enough – I drew pictures, created fan fiction, and referenced the game whenever I could. It wasn’t long after I finished playing my friend’s copy that I finally acquired my own.

Indeed, Secret of Mana is one of my favorite games of all time, and it’s one that’s very important to me as a gamer. I try to go through it at least once a year because it always brings me back to that time when I was just a kid in a now-closed toy store. Now, at this point in this long introduction I feel the need to mention that I’m fully aware that Secret of Mana is not perfect. In fact, looking at it without my nostalgia goggles affixed to my face shows that the game is clearly a product of the early 90s. So! When Square announced that they would be creating a remake for this game, my immediate thought was that they would address the issues that were causing Secret of Mana to not age as gracefully as I would have liked. Finally, Secret of Mana could become the game that I felt that it was during those days I first played it!

Unfortunately, that didn’t happen. This remake is soulless, sloppy, and sad. Square tried to cover up all of the Super Nintendo version’s problems with a fresh coat of paint, dual language voice acting, and a remixed soundtrack. None of these new features are enough to make up for the game’s problems. The cherry on top of this awful sundae is that the game is prone to crashing during random times. Seriously, what happened?

Overall, the story has remained unchanged. After falling from a bridge and into a river, a boy named Randi begins to look for a way back. As luck would have it, he sees a sword stuck in a stone. Drawn to it by a mysterious voice, he yanks the sword only to see a ghostly figure informing him that the power of Mana is in danger. On his way back to his home of Potos Village, monsters have started to appear. The people of Potos agree that Randi is a bad omen and banish him from the village. Now, young Randi has a heavy burden on his shoulders. He needs to restore the sword and gather allies before some baddies use Mana for all of the wrong reasons. I’ve always enjoyed Secret of Mana’s story, and in this version it’s just as enjoyable. It’s also, for the most part, the same word-for-word. I figured Square would give the script some sort of update. One notable difference are inn conversations. Similar to skits in the Tales of series, Randi, Primm and Popie will discuss the goings-on at an inn. They were a nice touch and give the characters more personality than they showed in the Super Nintendo version. It’s nice seeing the three heroes do more than just say a few lines of dialogue during story sequences.

Two of the biggest complaints in the original Secret of Mana were that enemies had a delay when they received damage and that waiting for the action meter to refill to 100% resulted in tedium. Neither of these issues were addressed in this remake. Pressing the attack button will cause a character to perform a regular attack. You can follow it up with another attack, but the damage will be pitiful. In order to deal proper damage, you need to wait for a meter to refill back to 100%. Now, as a fan of the original I don’t mind this. For a remake, I figured that Square would do something to streamline the combat. They didn’t.

You start the game with a sword, but over time you will get more weapons. Your arsenal is completed thanks to Primm and Popoi learning magic. The more weapons and magic get used, the more powerful your characters become. Just like the original, magic is overpowered. Unlike the original, the game is easy before characters acquire magic. For example, the dreaded Spiky Tiger will fall before you know it. This is even when you take the game’s terrible AI into account. Indeed, the remake’s AI settings were made worse. Finally, the game has a tendency to crash. While the auto-save feature prevents any major headache, it’s still a bother. My game crashed 19 times in total.

Most of your time in Secret of Mana is spent fighting enemies. Towns and villages will give you a brief rest from the combat, as well as give you a chance to buy new equipment and rest at an inn. Every NPC in Secret of Mana has been given a voice. This was a nice touch. They have the same one-liners that they had in the original, but it’s nice having a voice behind the character model. Voices can be in English or Japanese. Another change is the soundtrack. All of the music has been remixed. Unfortunately, it’s terrible and not worth listening to. Ever. The good news is that you can opt to have the original score play instead. Secret of Mana’s new look is pleasant, but basic. Square could have done more.

In fact, the key word here is “more.” This remake needed “more” of everything to make it something other than a nostalgic cash grab. After all, Secret of Mana is a short game. It can be finished in about fifteen hours. My time took about 25 hours because I wanted to get all of the trophies. The only ones who will enjoy this game will be those that enjoyed the original. This remake will not win over any new fans, nor will it change the minds of those that didn’t like the game on the Super Nintendo. It’s a sad thing.

Overall, 5/10: These days, Square tends to give franchises not named Final Fantasy or Kingdom Hearts the proverbial shaft. This remake is proof of that.