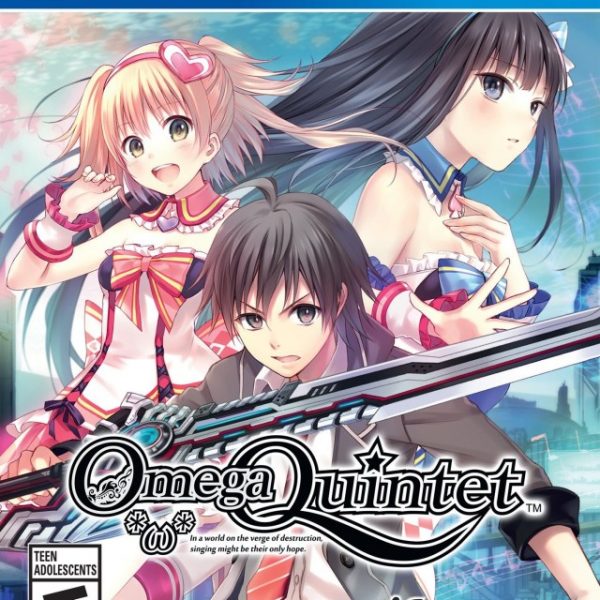 When I bought my PlayStation 2, the first game that I picked up with it was Ephemeral Fantasia. With my PlayStation 3, the first game I got was Valkyria Chronicles. Both of those games were perfect ways to introduce my hands and brain to the new, respective consoles. I figured that this trend would continue with my PlayStation 4 when I picked up Omega Quintet. From the description on the back of the box, to the beautiful screenshots, to the over the top anime style it looked like Omega Quintet could do no wrong. Unfortunately, this game developed by Compile Heart’s subsidiary and Idea Factory ended up being a disappointment.

The story of Omega Quintet is about a world living in fear of monsters known as the Blare. Having nothing to do with my favorite character from The Facts of Life, these entities twist the minds of humans and cause them to suffer internally. The only way to stop them is through the power of song. This is where the Verse Maidens come into the picture. With their powers, they can destroy the Blare and do so wearing stylish getups. Momoka, one of the most renowned Verse Maidens has been fighting the Blare for years. One of her biggest fans is a spunky girl named Otoha. Due to some odd circumstances, Otoha inherits Momoka’s weapon and becomes the newest Verse Maiden. Otoha’s best friend is Takt. It’s up to Takt to assist Otoha in finding more Verse Maidens and stopping the Blare for good. The story has a simple but light-hearted premise that I have no problem appreciating. My biggest issue with it is that the story segments take far too long to shove the characters and their personalities in your face. From the start, it’s clear Otoha will be eternally plucky. From the start, it’s clear Aria will be the soft-spoken Lolita. Instead of slowly introducing themselves, all of the characters immediately show you what they’re all about. The sad thing is, most of them are annoying. As a fan of anime and RPGs inspired by it, I have a really high level of tolerance for most characters. In Omega Quintet, I find myself constantly getting angry at them.

Luckily, they all look amazing. Seeing as this is my first PlayStation 4 title, I had no idea graphics could look so shiny. Characters, monsters, and most of the environments in Omega Quintet look absolutely stunning. Spells and skills that fling monsters around like bouncy balls add more fun to the game’s look. Over the top special effects are standard for a game from these developers, but seeing them on a modern console like the PS4 is still a sight to behold. One of my biggest problems with the game’s presentation is the music. For a game about saving the world with the power of song, you would think that the music would be better. Or at least it would be memorable. It’s just there and brings nothing to the table. There are a few good voiced songs that play when you have your Verse Maidens channel their inner idol and put on a show, but they are few and far between.

The majority of your time with Omega Quintet will be spent controlling Takt and his girls in your hub and in dungeons. The hub lets you save your game, go to the Training Facility, purchase and/or improve gear and talk with your team. You can also participate in events that boost their feelings for Takt. There are various sub-missions you can do, too. Whether you select a sub-mission or a story mission, you will be taken to a dungeon. If you played the Hyperdimension Neptunia games, these will look familiar to you. Combat is where you’ll be going toe-to-toe with the Blare. The battle system in Omega Quintet is turn-based. The turn order is displayed on the right of the screen. When a character’s turn appears, they can perform up to five actions. Each character wields a different type of weapon that will deal more damage depending on where the enemy is situated. Spells and skills also have ranges. The more powerful actions yield more waiting time before they can go again. Enemies can do the same. Enemies can also perform an Order Break which will really mess up your flow and ruin your day. This is because it becomes critical later in the game to get the turn order manipulated properly so you can lower enemy abilities and raise your own, all while attacking the enemies before they attack you. It’s an ambitious battle system, but the execution is severely lacking. Due to intense difficulty spikes and bosses with high amounts of energy, the battles end up being frustrating. They also have a level of complexity that could have been made more accessible. The initial stages are made that much more challenging due to the fact that the battle system throws you to the lions immediately. The tutorials help, but not as much as they could. It’s a real downer because games like Cross Edge have complex battle systems that end up being addictive and fun once things click. In the case of Omega Quintet, this doesn’t happen even upon its mastery.

Omega Quintet is a very long game. It can take about 40 hours to finish and see the credits. For those that wish to truly challenge themselves and their patience, there is a hard difficulty level that can be selected and some really intense trophies to earn. All of this, plus plenty of things that can be permanently missed can make the final play time almost 100 hours. Personally, I would rather spend my time with a game that’s not as obnoxious as this. For a while, I thought Idea Factory was on the right track. This game feels like they stepped back due to focusing only on shiny graphics. I have a really difficult time recommending Omega Quintet to all fans of RPGs.