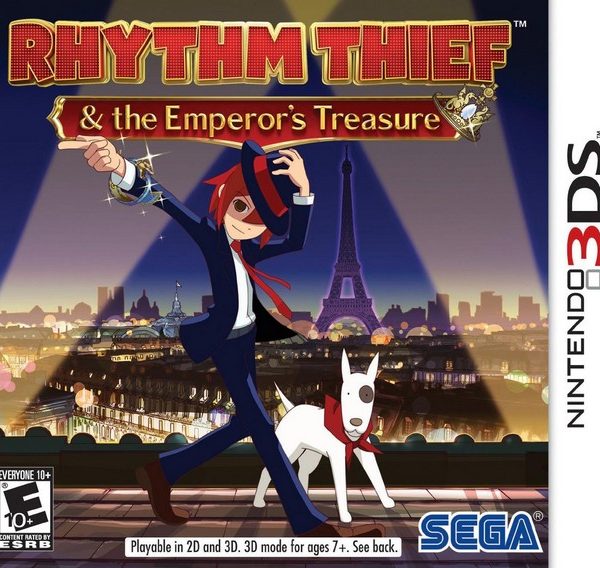 Since the touchscreen debuted on the Nintendo DS, there have been multiple games that try to utilize it in a fun way. Some of these games involve music; you need to use the stylus on the touchscreen to tap, slide, spin and/or drag in order to move from stage to stage. As a fan of games that revolve around music, I always enjoyed games that did this. Examples include the popular Elite Beat Agents to the obscure Ontamarama. Games like this continued with the 3DS, and when I learned that I would be performing similar actions in Rhythm Thief & the Emperor’s Treasure, I was pumped. As these things go, Rhythm Thief had a gentle introduction that made me look forward to more. As “more” arrived, I found myself getting bored, and then frustrated. By the end of the game’s ten chapters, I was tired of Rhythm Thief. It’s a playable rhythm game that gets more and more frustrating and out of sync the further you get.

Taking place in Paris, Rhythm Thief tells the story of a young man named Raphael. By day, he’s another Parisian. By night, he becomes Phantom R. As Phantom R, he steals artwork from Paris’ galleries in hopes of uncovering the truth about his missing father. Together with his dog, Fondue, Phantom R ends up meeting a girl named Marie. Maries, a promising violinist, has a coin that resembles one that Phantom R possesses. Together, they will explore the streets of Paris to reveal the mysteries behind some of Paris’ most famous mythologies as they outwit goons under the control of a madman named Napoleon. Surprisingly, Rhythm Thief’s story has more heart than other games in the genre. You’ll actually get to know Raphael and the people he encounters as he explores Paris. In fact, there are tons of NPC’s to chat with as you move from event to event. There are some moments that are too saccharine, but I appreciate that there’s more to Rhythm Thief than just moving from stage to stage. There’s actually a goal in sight for Phantom R and his friends.

Exploring Paris on the 3DS may sound silly, but the cartoony characters and vibrant backdrops look great. The art style used in Rhythm Thief mixes the innocence of a children’s cartoon with the smooth artistry of quality Japanese animation. The game features some animated movies that advance the story. The music, which is very important for a game like this, is of similar quality. When you’re not playing one of the rhythm games, you will enjoy relaxing, Parisian inspired music or ambient tunes which serve the situation well as Phantom R sneaks around town. Most of the songs that are played during the rhythm games are catchy and will have you tapping your feet along with it. Unfortunately, while these same songs are playing, the game starts to show some problems.

Rhythm Thief’s game play can be divided into two categories. The first is when you are moving Raphael/Phantom R throughout the streets of Paris. Aside from chatting with the locals, you can find hidden coins, hidden discs that will let you listen to music, and musical notes that can be pieced together. Raphael is equipped with a device that can record various sounds. By recording a sound and playing it in front of the right person or object, you can continue with the game’s exploration. For instance, you can record a lullaby to put a tired librarian to sleep. You can record the sound of sizzling meat to make a guard run towards a restaurant. It’s a clever way of incorporating puzzle solving and sound. The choices are always obvious, but that doesn’t stop them from being interesting. The problem with exploration is that there are times that it will feel as though you’re not making any progress because a few of the chapters have more padding than necessary. Sometimes, you’ll need to solve a puzzle by playing a Simon type of mini-game or a game of logic. Again, they’re nothing difficult, but doing the same thing grows old.

The other aspect of the game play has Phantom R and/or one of his friends fighting an enemy, escaping a trap, hiding from guards and more via a rhythm game. At the start of the game, this is where Rhythm Thief shines. But, as you continue your journey, that shine starts to dim. By the end of the game, said shine is just a tiny glimmer. The momentum gradually stalls due to a variety of reasons. The first is that some of the rhythm games have, for lack of a better term, stupid controls. One example involves you using the gyroscope to line up a reticle in order to knock enemies out of a sky. This combination is as bad as it sounds. Similarly, other games have too much going on. Instead of relying on rhythm and timing to see yourself victory, you have to memorize a string of button presses. Another issue is that you’ll be seeing the same rhythm game over and over. The first game you play involves using the stylus to match the moves of backup dancers. Coupled with a catchy song, it’s a fun game that I enjoyed playing multiple times. I wouldn’t have replayed it so many times had I known that the same mini-game with an increase in difficulty and a different tune would show up again and again. But, my biggest issue is that there is too little room for error and very little leeway in recovering. As you perform in these rhythm games, you will increase the Rhythm Meter. When it’s full, you will have an A ranking. When you start to mess up, that letter grade goes down. If the meter empties, you lose and need to start the game again. It could take one simple mistake for you to drain the meter completely. But, worst of all, there will be instances when you will have timed the rhythm properly but the game won’t register it. It’s aggravating knowing that your timing was right but the game disagrees. Re-watching the same events leading up to the rhythm game adds to the aggravation. If things start to get too harrowing, you can buy items that aid in finishing the game. I should point out that I’m not complaining that the game is “too hard.” I’ve played plenty of rhythm games that were much harder. But, at the same time, those same games got more fun the further you got. Instead of the level of challenge increasing alongside the level of fun, Rhythm Thief’s level of challenge goes up while the level of fun goes down.

Rhythm Thief & the Emperor’s Treasure can be completed in about six to eight hours. If you enjoy the game, there are multiple side-stories and extras to unlock. Those that adjust themselves to the more difficult rhythm sections can possibly sink multiple hours as they try to go for the best score. As for me, once through was plenty. Its a shame because I really wanted Rhythm Thief to be something special. I give Sega and Xeen credit for trying to make something innovative and different in this genre, but it’s a difficult title to recommend due its issues.

Overall, 5/10: It looks like Rhythm Thief & the Emperor’s Treasure has the rhythm, but it has two left-feet.