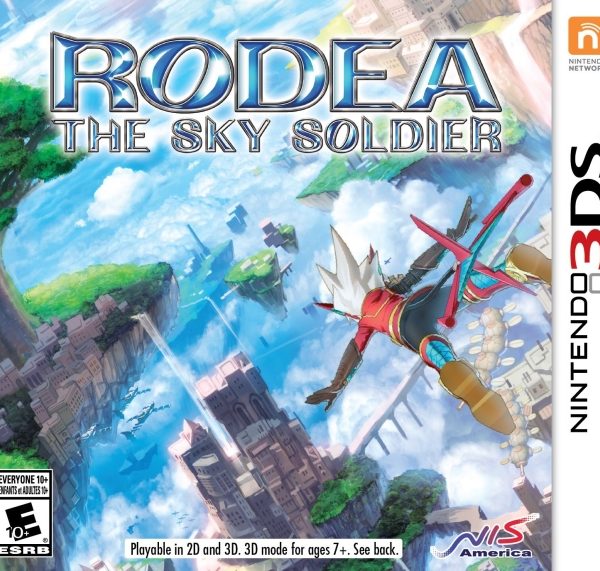 Rodea the Sky Soldier is one of those games that looks like it would have it all. The cover makes it seem like you’ll be soaring through the skies while overlooking gorgeous environments. The story sounds like it’s one of hope and promise; where a robot learns the truth about what it means to be a human. The ability to upgrade your main character makes it seem like there is unlimited potential for customization. Somewhere along the way after take-off, things start to plummet. There is not much that is worth salvaging in the wreckage, either. In other words, Rodea the Sky Soldier is one of the most disappointing games to be released on the Nintendo 3DS and does not come recommended to people looking for something new to take with them.

Actually, before I talk about the game’s unfortunate tendencies that cause it to crash and burn, I should mention that there is one redeeming feature: the music. Rodea’s soundtrack combines techno, chemical beats, trance, and acoustic guitars with the upbeat rhythms and tones you’d expect in a game that has you taking to the sky. If you decide to purchase this game and manage to find it new, the soundtrack will be included. You will be able to listen to this great music after you learn that the game should be avoided. The voice acting is another aspect that deserves some praise. You can have the conversations play in a variety of languages. I have only listened to the English voice acting, but my guess is that the rest of the languages sound just as polished.

Alas, the rest of the aspects that form Rodea the Sky Soldier range from passable to pathetic. The audio half of the presentation is nearly flawless, but the visual half has some issues. The good aspects of it include quality, 2D anime portraits that are displayed during conversations and some impressive looking bosses that tower over the good guys. The negative aspects are more apparent because they include repetitive level design, generically uninspired enemies and an overall jagged appearance. The 3DS is a powerful little system that is capable of displaying smoother polygons, so it’s frustrating to see Rodea not get the treatment it deserves. Overall, the graphics work but they aren’t nearly as memorable as the music.

Something that I thought that would be memorable is the story, despite the gameplay taking center stage. Rodea the Sky Soldier takes place in the Kingdom of Garuda. The prologue takes place 1000 years before the first chapter. We start with princess of this kingdom, Cecilia, desperately trying to escape from an enemy fleet controlled by the Machine Empire of Naga. At her side is the titular hero; a bionic soldier with the ability to soar in the skies. Cecilia holds the Key of Time, a device that unsurprisingly has the ability to stop time. The Naga Empire, under the iron fist rule of Emperor Geardo, wants this because they can halt the flow of time when the two mentioned kingdoms align in order to obtain valuable resources indefinitely. After some battleship blasting and chasing, Cecilia’s fleet is shot down. With her energy starting to fade, she gives one half of the Key of Time to Rodea. Things get worse for him as he is sent 1000 years into the future to keep his half safe. Now with a serious case of amnesia, Rodea meets an engineer named Ion who wants to restore his memory and learn more about this mysterious cyborg. The story has a strong start, especially when you witness Rodea’s painful goodbye to Cecilia. After the initial chapters, things start to turn flat as Rodea attempts to piece together the past and protect present. The theme of a robot learning to be a human has been done before, which is fine. However, the dialogue that comes with it can make theme memorable. In the case of Rodea usually having nonsensical back and forth with his mentor and mechanic, Ion the dialogue is easy to skip. Also, Ion is a loquacious chatterbox that will get annoying quickly.

Of course, the one thing most people are wondering about Rodea the Sky Soldier is if it’s as fun as it looks. If you couldn’t tell by the tone of the review, the answer is no. Again, things have a good start but something happens during the middle of the flight. The most important aspects of the controls are introduced in the prologue. Rodea can run and jump on the ground, but success depends on his (your) ability to fly through the stages over obstacles while combating enemies. After jumping, pressing the A button will cause Rodea to enter Pre-Flight Mode. Rodea will remain static in the air as you aim a reticle towards a destination. Hitting the A button again lets him take off towards the destination, but as expected, he can’t remain airborne forever. A meter will slowly drain the longer you remain in the air. Obviously, once it runs out you’ll start heading back to the soil. The meter is relatively easy to restore because Rodea can perform a wall kick or hit an enemy. Also, a brief period on the ground will restore the meter. As the journey continues, Rodea will obtain new techniques. The controls take a while to get used to because they aren’t as tight as they should be and the camera often gets stuck and jumbled in the more crowded areas. Other little things add up to make things more difficult than they should be: Attacking an enemy on the ground causes Rodea to rebound out of control. Using the Y button to skip pre-flight mode lacks precise control. Trying to collect a chain of gems called Gravitons is frustrating due to a fickle Auto-Lock feature. By themselves, these features wouldn’t be an issue.

Each area Rodea explores has a variety of collectibles to uncover which can be used to upgrade Rodea and buy additional perks. Some of these collectibles get dropped by enemies. After you finish a stage, you can upgrade Rodea with these. Again, it looks like it could be fun, but the chances of you finding enough resources to get everything desired are low. You will have to replay stages multiple times to get enough components, which can be expectedly tedious when you want to proceed. When you finally have enough for an upgrade, the improvements are negligible. The further you get, the more powerful the enemies become. However, Rodea’s base stats will remain close to constant throughout the adventure.

Rodea the Sky Soldier looks like it would be an exciting new series, but the results show nothing of the sort after takeoff. Keep in mind that this review is for the Nintendo 3DS version of the game. Thus, things might be different for the version found on the Wii U which contains both the original Wii version and the updated Wii U version. Obviously, I don’t recommend this version. After all, a memorable collection of music can only carry a game so far.

Overall, 4/10: Rodea the Sky Soldier looks like a cloud cruising, fast flying adventure that consistently finds a way to put the fun to a screeching halt.