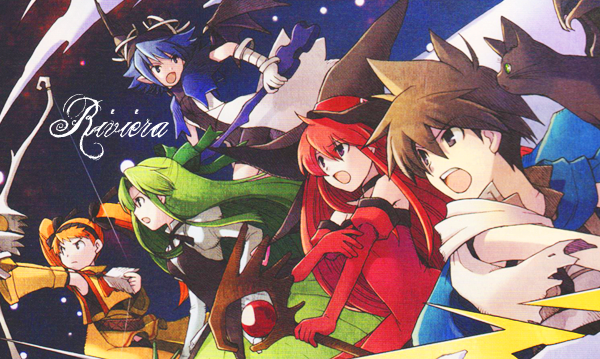 Like most gamers, I get the urge to replay a game for a second time. Maybe I’ll try a new set up. Maybe I’ll pick up on a story event that went over my head the first time. Maybe I’ll do something that makes this experience completely different from the previous. That was my goal when I decided to replay Riviera: The Promised Land. The first time I played Riviera, it was on my PSP. I finished the game and still have some good memories of it. I decided to change things up and play the first version that received localization. This review will be focusing on the Game Boy Advance version of Riviera: The Promised Land. If you’re wondering which of the two you should play, I’ll save you the time: go with the PSP version. But, if you’re only option is the Game Boy Advance version, then continue reading.

Riviera: The Promised Land’s story draws heavily from Norse mythology. Years before the game begins, the war of Ragnarok between the gods of Asgard and the demons of Utgard came to an end. While Asgard was the victor, the victory wasn’t without sacrifice: the gods sacrificed their lives to create warriors called Grim Angels. Armed with special weapons called Diviners, the Grim Angels wiped out the demons and Utgard was turned into a paradise called Riviera. With rumors circulating that the demons might return, a wingless Grim Angel named Ein heads to Riviera to activate the Retribution so Riviera can be permanently erased. However, Ein’s in for a surprise. Grim Angels and demons will clash in a fight for the prosperity of Riviera.

Riviera’s story is interesting because it finds a balance between traditional Norse mythology and originality. Ein is a great leading character that you’ll be cheering for moments after he appears on screen. After the first chapter, Ein will journey through Riviera with a crew of beautiful women. Lina, Fia, Serene and Cierra have their own reasons for joining Ein, but through the course of the game they start to develop feelings for him. Depending on some of the choices you make, you will end up romancing one of these girls and earn their respective ending. Watching these characters grow is an absolute delight. The question is whether or not you’ll be willing to do so due to some of the design choices.

Sting Entertainment’s Department of Heaven series is known for quirky ideas and some strict learning curves. Riviera: The Promised Land is more forgiving than others, but even the most seasoned RPG fans will need to adjust their way of thinking to find maximum enjoyment. From moment you gain “control” of Ein, it’s clear that things are different. You don’t move Ein through dungeons or fields. Instead, Ein’s movement is done by using Move Mode. The screen will have various directions that must be pressed for you to move to the next area, move to an object, move to a person, and so on. With the push of a button, Ein can enter Look Mode. This is where Ein can examine objects. However, examining objects in Look Mode (while in a dungeon) requires Trigger Points, which are rewarded from battle. You can look at a treasure chest, but opening it costs TP. You can examine a piece of paper wedged between some stones, but pulling it out costs TP. To add to this, most of the time you’ll be required to enter certain button prompts within a time limit. Since Trigger Points are such a valuable resource, it’s up to you to determine whether or not they’re worth spending. For lack of a better term, exploration is weird. But, after a few tries, the weirdness wares off and it starts to become second nature. It’s important to keep in mind that this was my second time playing Riviera. Despite my previous knowledge, I still had to readjust to its quirks.

Unsurprisingly, battles are just as outside-the-box. Ein and two other party members can participate in battle. You can have either a two in front, one in back set up or a two in back, one in front set up. Both options have their benefits. Once your form is selected, you need to select up to four items to bring. The fun thing about Riviera’s combat is that the same item will have a different effect depending on the user. If you bring a staff, Cierra will use it to deal magic damage. However, Fia will use that same staff to heal her friends. If you bring a Fire Stone, Ein will use it to increase his resistance to fire. However, Lina will use it as a bomb. There’s a wide variety of weapons with different effects. It’s always exciting to get a new item to see how each party member handles it.

When battle begins, things move at a brisk pace despite the game’s turn-based blueprint. Each participant takes turns performing an action. As damage is dealt to the enemy party, their Rage Gauge increases. When this has reached its maximum, the next enemy will perform a powerful attack. However, the same damage you deal to the enemy’s builds up your Over Drive Gauge. Your team can use their equipped items to perform an Over Drive ability to lay on some hurt to the enemy team. After your team deals the final blow, you’ll be graded on your performance and rewarded with Trigger Points accordingly.

Yet another unique feature of Riviera is that characters don’t get experience points in a traditional manner. Instead, using an item repeatedly will let them “Skill Up” and earn an increase in stats. However, most items have a durability count. Once they reach zero, the item is gone. So, how do you prepare for stronger foes?  The answer is to participate in a practice battle. After a certain point in the game, you can “level build” by entering practice battles and using any item as much as you want. It can get tedious, but the results are worth it. Ein and his friends can become very powerful with enough practice. I could continue to dive deeper into all of the nuances of Riviera’s game play because there is more to tell. But, I’ll stop here. It’s a unique game through and through, and sometimes being too unique can turn casual RPG fans away.

However, one thing that everyone can agree on is that Riviera looks and sounds beautiful. Riviera’s music is a masterpiece. You want grand orchestral arrangements? You got it. You want toe-tapping battle themes? You got it. You want relaxing tunes that put you at peace as you explore quaint villas? You got it. The soundtrack has it all and never grows old. The Game Boy Advance version features voice acting, but it’s limited to battle cries or quick clips. Those that want more voice acting (and dual audio) will need to play the PSP version. Riviera’s look is special because it features exceptionally detailed and crisp sprites. Ein and his posse look great, but they’re not the only ones. Monsters, NPCs, environments and more pop and punch in Riviera. I’d go as far to say that this is one of the best looking Game Boy Advance games of all time. But, as expected, the PSP version has better presentation.

My biggest gripe with Riviera on the PSP matches my biggest gripe with this version: inventory. Ein and his friends can only carry 16 items. It’s maddening to figure out what to keep, what to use, and/or what to pitch. There are no shops in Riviera. There isn’t one spec of gold. Items come from treasures and from battles. If you aren’t careful, you can lose a valuable item and never get a chance to get it back. Aside from that, my second journey through Riviera was just as fun as my first. I mentioned this in the introduction, but if given the choice, I would recommend playing the PSP version. However, if that’s not an option, then the journey on the Game Boy Advance will offer the same, unique content that takes the RPG genre and shakes it up.

Overall, 7.5/10: Riviera: The Promised Land on the Game Boy Advance proves to be a timeless journey featuring angels, demons, and plenty of interesting ideas.