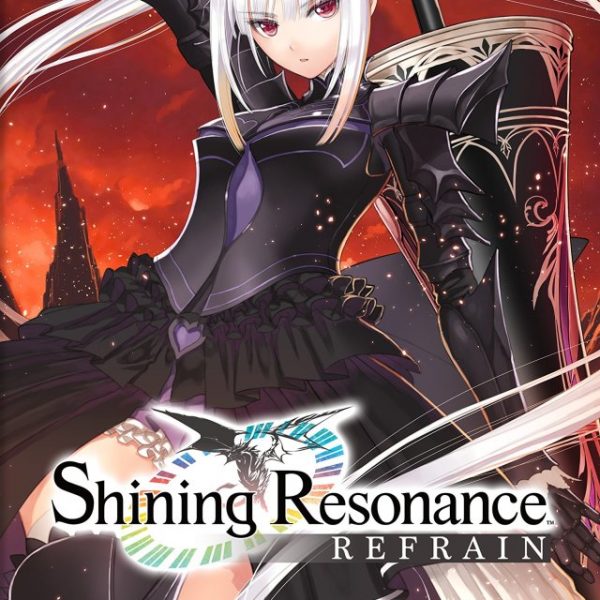 Shining Resonance Refrain taught me a lesson. It taught me that I can no longer immediately assume that a game’s cover featuring a character that looks like the perfect combination of Lolita, maid, and dragoon will be a reflection of said game’s quality. Over the years, I’ve been able to overlook a game’s flaws because its anime-inspired presentation and setting were enough. Or, perhaps, I was ignorant of its flaws. Or, and this is probably the most likely situation, I was too stubborn to admit a game had glaring flaws. As a Shining fan, I was happy to see the series return to North America. But, what really caught my attention was Shining Resonance Refrain’s cover. Long story short? I should have done more research beyond, “Ohh! Pretty cover art!” This is not a bad game, but it’s not a good one, either.

Shining Resonance Refrain is an enhanced port of Shining Resonance, a Japanese exclusive on the PlayStation 3. The game has a very promising start. It takes place in a fantasy world filled with elves, drow, dragons, and all other sorts of fantastical beings. We begin in a prison called Gaelritz. Sonia Blanche, the princess of Marda, is on a mission to find a man named Yuma Ilvern. Sonia and her friend Kirika Towa Alma find Yuma, but their escape plans fail when a woman named Excella steps in with her pet dragons. To protect Sonia and Kirika, Yuma unlocks the very same powers he was captured for: the ability to transform into the legendary Shining Dragon. Yuma and his new friends escape, but this new war is just beginning. Excella sees an opportunity for her people with the Shining Dragon’s powers.

I liked the story. I’ve seen it before with different characters and different settings, but I appreciated its themes. It was the characters that really drove it. I adored Sonia. I can’t recall the last time I cheered for an RPG romantic couple more than Yuma and Sonia. Unfortunately, the story’s execution is lazy. About 90% of the time, the story is played out in “talking head” style. It’s a lazy, overused method that removes the immersion. Picture this: two characters are fighting each other. Instead of seeing the combat, the screen will go black and a blue crescent will appear. The screen returns to the characters, still in talking head fashion, and then the screen will go black again. But, this time, an orange crescent will appear! Such drama! Such emotion! By the time I reached the fifth chapter, I was skipping story events. To add to this, most of the story scenes act as fluff and repeat information that we already know. 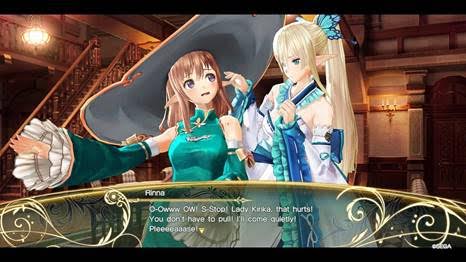 This would have been funnier if they were actually moving.

If you want to see all of the story and its characters, you’ll have to ready yourself for disjointed design. Shining Resonance Refrain’s biggest issue is a lack of cohesion; the game’s features don’t flow well together. Even moving around the town of Marda is cumbersome. Serving as a hub for your team, it’s the only town in Shining Resonance Refrain. That’s fine. And at glance, it looks like things would be SOP. But, let’s break it down:

Yuma can shop for items. The downside? Everything available for purchase is expensive. Yuma can craft his own items with alchemy. The downside? You’ll always be missing ingredients and the game won’t let you know how/where to acquire them. Yuma and his friends can equip stones called Aspects to your weapons to add benefits. The downside? They’re both expensive and hard to make. Yuma’s team can go to side dungeons for exclusive rewards. The downside? You have to ramp up the difficulty if you want to get properly rewarded, and even then you’re at the mercy of RNG. Finally, Yuma can help the folks of Marda out by fulfilling fetch quests. The downside? They’re fetch quests. It’s unfortunate that the game has all of these features, but none of them offer any aspect (pun) of fun.

There is one thing that I really enjoyed about traipsing around Marda: dating. Yuma can invite his friends to spend an evening with him as they talk about the goings-on in the kingdom, their favorite foods, training regimens, and other topics. It really adds to the development to each character. Sometimes, the character you spend the evening with will ask you on an outing. This lets Yuma and his partner go around town and enjoy its sights and sounds. There’s a genuine authenticity to these because they really show how your team becomes unified, and how much they end up viewing Yuma as a person instead of a potential tool for war.

Shining Resonance Refrain doesn’t have a traditional world map. After you leave the safety of Marda, you’ll be in the Windia Plains. These plains connect you to the various places around Alfheim. This means you’ll be revisiting the same places often. Said places are filled with hostile creatures ranging from goblins to golems. Shining Resonance Refrain uses an action/RPG battle system that feels just as disjointed as the non-combat gameplay. Once you start a battle, you can use the A button to perform a combo and the X button to perform a character’s unique Break Attack. Each character can equip four special attacks called Force Abilities. Characters can perform a guard and dodge, too. Regular and Break Attacks require Action Points, which are indicated by a semicircle around your controlled character. The game looks like it’d be designed for you to perform fluid strings of combos with your partners in a way similar to the Tales of series. Unfortunately, the commands aren’t responsive and the team AI is poorly designed. More often than not, your characters will run into to the fray with no thought of their well-being. Or, they’ll just stand there. To add to this, Yuma and Sonia are the only characters out of sizable roster that are fun to use. Yuma will be the one used the most due to his ability to transform into a dragon. Eventually, your team will be able to perform BAND Sessions. Your mates will perform a J-Pop tune (seriously) for upgraded attack power, immunity to status ailments, and more for a limited time. Finally, there is the Bonds Diagram. I’m not really sure what to say about it because the thing doesn’t make any damn sense and the game’s tutorial did a piss poor job of explaining it. I think it determines how your characters interact with one another in combat, but I’m not sure. You’ll see character’s portraits pop up during combat if you set it up right. I guess. 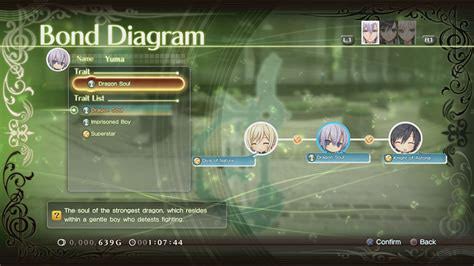 I have, like, no idea what any of this stuff here means.

Shining Resonance Refrain offers two story modes: Regular and Refrain. The difference is that Refrain Mode starts you with two extra characters from the start of the adventure. There are two difficulty options you can switch between, too: Casual and Standard. No matter which you select, the game takes about 30 hours to finish. Honestly, that’s 30 hours too long. I can overlook the fact that Shining Resonance Refrain is a budget title. Not every game needs to be a million dollar project. However, more care should have been given to make the game just flow better. Beyond it’s pretty graphics and nice music, this is an RPG that can be ignored.

Overall, 4.5/10: Don’t let Tony Taka’s gorgeous anime art fool you like it did me. Shining Resonance Refrain is a poorly designed game. Even the promise  of Yuma and Sonia ending up happily ever after can’t save it.