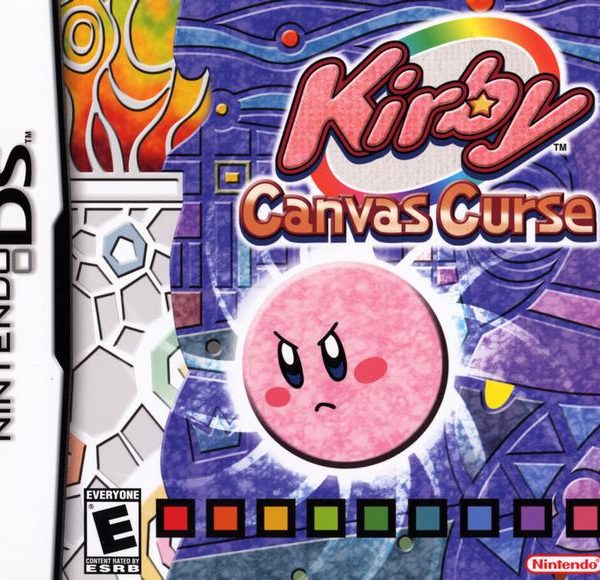 Author’s Note: This review was originally published on December 7th, 2010 and later updated on May 12th, 2014. Around this time, I started getting tired of the “witty” taglines.

Kirby might be my favorite Nintendo character, especially with innovative and challenging games like Kirby Canvas Curse. While it appears simple at first, and while it is nothing like a traditional Kirby game, it is probably one of the most fun games I’ve played on the DS for quite some time. And trust me, I’ve played plenty of titles!

Color Me Bad.
Kirby Canvas Curse takes place in Dreamland. As Kirby was resting under a tree, an evil witch named Drawcia entered the scene and placed a curse on the land. She wanted to make the entire world of Dreamland her painting. With the help of a magic brush, Kirby turns into a ball to put a stop to Drawcia’s evil ambitions.

Kirby games continue to have adorable stories as evidenced by Canvas Curse. The game is cute and has a colorful world to explore, but there are some surprisingly dark undertones with the setting. Drawcia is more diabolical than King Dedede or Meta Knight could ever wish to be. Therefore, you have help Kirby as best you can in order to emerge victorious.

Hanging Puff.
Since Kirby is a ball the entire game, players take complete control of his direction with the touch screen and stylus. On the top of the screen is a map of the current level. The bottom screen is where the real action happens. In theory, Kirby Canvas Curse is simple. Kirby rolls in the direction he faces and you can change his direction by drawing a vertical line in front of his path. Tapping Kirby will make him roll faster, which can be used to defeat enemies. Enemies can also be defeated by tapping them and having Kirby hit them at a normal speed. Some enemies will give Kirby abilities. Needle and freeze let him dash with a barrier around him. Spark and beam let him hold still in one place while generating electricity. New abilities make their debut, too, such as missile and balloon.

Of course, it can get tricky in certain areas. Actually, it gets extremely challenging in certain areas. Spikes, electric floors, and traps lay everywhere in the stages and it’s up to you to direct Kirby on a safe path to the exit. The stylus is used to draw paths for Kirby. Once on a path, Kirby will go in the direction of the drawn path. You can make a line as long as your Draw Meter, at the bottom of the screen, allows. The reason the game is so challenging is because you need quick thinking and reflexes to get Kirby out of precarious situations. Kirby can only take four hits before losing a life, and danger lies everywhere.

Other nifty features of Canvas Curse include collecting medals to buy things, drawing loops to make Kirby accelerate, and boss battle mini-games. The initial stages will be simple enough, but if you want to collect all of the medals and hit all of the switches, you’re going to need to utilize the stylus as effectively as possible to emerge victorious.

The Rainbow World.
Kirby’s quest takes him through seven worlds based off the colors of the rainbow. Each world is full of color and unique design. Kirby himself looks adorable as ever, as do some of his foes. The music in Kirby has some old tunes and some new ones, as well. You won’t be hearing Kirby’s adorable, “Hiiiii!” during the game, but the other darling effects make up for this. Kirby Canvas Curse looks great, especially considering the simplicity of the theme.

The Magic Touch.
Kirby’s initial quest will take about five hours, even with all of the retries required to get over certain challenges. Gamers like myself will go back for more and collect as many medals as possible, complete every time challenge, and unlock all of the extras. Make no mistake: Kirby Canvas Curse is not a simple game. Simple in theory? Yes. At first the game might appear simple, but as the levels roll on, the game can be seriously challenging. Needless to say, the game has plenty to offer to those looking for something different and challenging on their Nintendo DS. Best of all, Kirby Canvas Curse adorable Kirby happenings that make the game suitable for anyone needing something to play on the go.