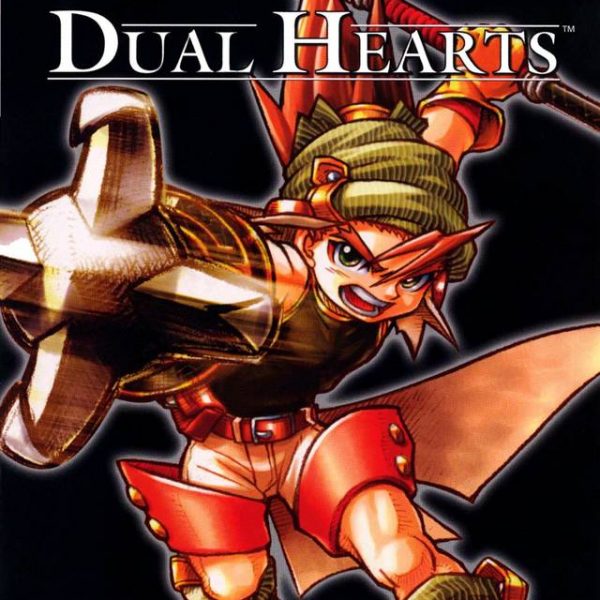 Author’s Note: This review was originally published on November 15th, 2002. For real, what was I thinking with this review? Just the introduction alone should give you an idea of how sloppy it is. Despite this, Dual Hearts is still one of my most cherished games of all time. At the time of its release, I was going through some major life changes. It always upset me that Dual Hearts was completely overshadowed by Kingdom Hearts.

YAY!! DUAL HEARTS! Out of all the action/RPGs I’ve played, this one is definitely number one. It’s such a shame that it came out the same time Kingdom Cra…erm…Hearts did (Although I still don’t see why people are all about the Disney thing…). This game is made by Atlus, the makers of the Tactics Ogre series.

Story: 8.75/10
Rumble is a cocky and hot headed Ruin Seeker who has landed on Sonno Island to find the legendary Dream Stone. While searching the Temple of Dreams, he runs into a creature called a Baku. This Baku has lost the keys to the Temple of Dreams and gets Rumble involved in a quest to enter people’s dreams and recover the keys before bad nightmares resurrect. The story is nice and light-hearted. I personally enjoy it. There are some nice twists and turns here and there, but I think some more could have been done with the characters in the game. But overall, a nice story.

Gameplay-Field: 9/10
While around the island, you can jump, swim, climb, flip and run around. You can also hop aboard your Baku and run around faster. Your health is displayed at all times, and Baku’s Tummy Meter is shown too. Day changes to night and what not, and you can interact with different people depending on the time of day, and you can even control the flow of time! One thing that does annoy me is that you can easily lose your place. What I mean is that sometimes, if you don’t land a jump, you slide and this can get annoying. Also, there are tons of objects in the houses and buildings. While you can jump on them, you can’t examine them. ”What’s that a picture of?” ”Who made this fountain?” You may just want to know about this stuff, but you can’t. But overall, gameplay in the field is fun and well done!

Gameplay-Dungeons: 9.75/10
FUN!! You enter peoples dreams to retrieve the keys. This is a nice mixture of Zelda and Alundra, but not a rip-off at all. You can wield two weapons at once, each one has a charge attack, they are able to create combos, and they can be used to solve puzzles. You get more as you progress, along with cool items that you can use to blow stuff up and use elemental properties! Your Baku also gets abilities! He can fly, swim, crush, and do other awesome things as the game progresses. There are tons of items to find, and getting 100% will take all of your wits. Monsters are abundant, and the more you kill, the more your weapon’s attack number increases! The dungeons are all different, and you have plenty of bosses to fight! The only little flaw is when you fall down a pit. You have to start at the front of the level, and many of the levels are loooooong. But that’s really about it. This is just good hack and slash fun with tons of new elements added to it. Well done Atlus!

Gameplay-Character Development: 7/10
Hmm…an average. Rumble and Baku develop really well over time, not just physically, but as characters. You learn to love Rumble’s personality, and learn to enjoy how fun a Baku can be. Many of the NPCs develop nicely too! But, there are just some things you may wonder about the character that could’ve been revealed. Good character development involves getting to know the characters like in LUNAR 2. Unfortunately, you get to know only a little about the characters in DH. But, you still learn some ok stuff, giving character development an average score.

Graphics: 8/10
The characters are 3D anime styled. They resemble Dreamcast quality, and I actually really like that. Every character is creatively made. Some look cool, some are annoying, and some are very pretty to all anime lovers ^_^
The backgrounds are equally nice. There are so many objects in and around the houses, and the buildings and forests are so beautifully done! The dungeons are works of art, and the weapon affects are very cool! Then why did I give it an 8? Well…the graphics lag a lot, especially in dungeons. You’ll be walking regular, then some monsters appear and everyone slows down cause of the graphic engine. What’s worse is that they can get fuzzy at times! This takes away from their beauty. It’s such a shame because this would be a perfect 10, but alas Atlus, you didn’t fix this. Oh, and as far as camera angles go I have no complaints because with the click of a button, you can make the camera go behind you. Other people will not like the camera angle deal, but I have yet to see an action/RPG that has camera angles everyone agrees on. So, without the graphic system problem, the graphics are creative, lush, and well done!

Sound: 10/10
Rumble does do some shouting and stuff when you fight. Like a ”See ya!” when he hits with a charged shot. It’s actually pretty cool. Also, Baku has his own sounds that he makes (to me a good thing, but to others an evil thing). And every hack and slash sounds great. Like most games, sound is perfect.

Music: 6/10
The soundtrack does need some improvement. The music isn’t bad, but it’s just missing something. There are no songs that really will stick in your head while wandering in town, and the dungeon music really isn’t too good either. I think DH could’ve had better music because it had such a good setting. But oh well, it’s nothing that makes the game bad.

Replay Value: 7/10
There is a difficulty setting to this game, and you may want to try the hard mode after beating it on the regular. Also, you may want to get 100% in each dream, and you’d have a better understanding of what you can and can’t do in order to do this. I don’t think you will start over after playing once, but chances are you will want to play again.

Buy or Rent? Buy
So you may wondering why spend a lot of money on a PS2 game no one really knows about. Well, the answer is simple. This game is one of those games only a few people play when it comes out, mainly because other ”better” games come out from ”better” companies. Dual Hearts is a great game, but is covered by all the Kingdom Hearts games on display. Kingdom Hearts will always be there, but Dual Hearts will leave the shops and then many days later, you will want to try it. But it’ll be gone and take you a while to find it. If you buy it and don’t like it, then simply return it.

Difficulty: You choose, but Easy
As I said, there are two difficulties to choose from. But in regular mode, the game is pretty easy. This is because you can recover your health anytime by using your Baku. Baku’s Tummy Meter will go down depending no how much health has to be restored. His Tummy Points can be recovered by finding Esmasons (sp?). These are abundant everywhere, so this game really shouldn’t give you too much trouble. Many of the bosses, however, WILL put up a good fight. You will have to use strategy sometimes, instead of mashing the circle and x buttons.

Overall: 8.75/10
Dual Hearts is a nice little gem of a game. It has some good points and some bad points. If the graphics didn’t lag, it would be so much better. It’s so unfortunate that it came out the same time Kingdom Hearts did. But overall, buy Dual Hearts and play through it. It’s a fun hack and slash game that is light-hearted and easy to learn.