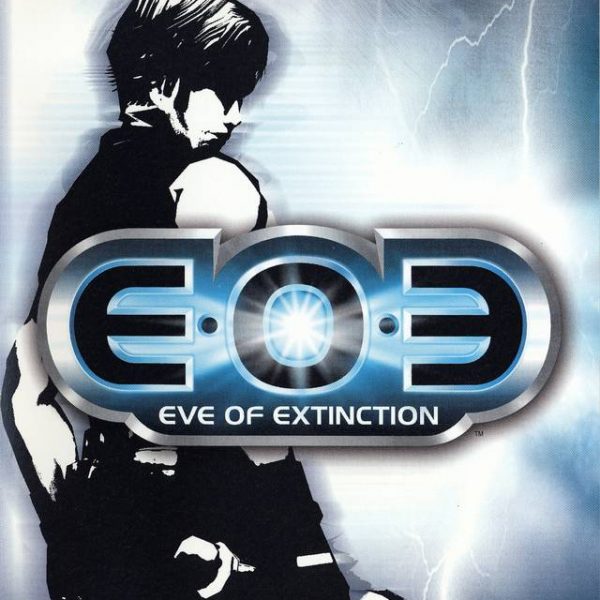 The PlayStation 2’s library is massive. The bittersweet thing about its huge selection of games is that there are so many titles that are easily overlooked and, as a result, end up getting buried in bargain bins among a plethora of sports titles or shovelware. EOE: Eve of Extinction is just one example of this. I recently finished this action title and have to say that it surprised me in multiple ways. The biggest surprise was its price; a snack in the vending machine costs more than what I paid for EOE. If you’re looking for a simple action game that can last a good six to ten hours, then consider looking into EOE: Eve of Extinction.

In the semi-distant future, the Wisdom Company has become a powerful conglomerate. Two of its employees, Josh Calloway and his girlfriend Elliel, have been snooping where they shouldn’t have been and end up uncovering some secret research about a weapon called Legacy. Unfortunately, they are caught. Under the orders of Wisdom’s CEO, Agla, Josh is taken prisoner while Elliel ends up becoming fused with the Legacy weapon. Luckily, Josh manages to escape with Elliel’s essence intact. Now, it’s up to Josh to restore Elliel to her human form and put a stop to the Wisdom Company’s ambition. It’s an interesting but slightly predictable narrative that won’t leave you itching to discover what happens next. However, it’s still fun to watch Josh and Elliel take down a giant, fortune 500 inspired corporation.

Since EOE is an action game, the main focus is on combat against mobs of enemies. Josh is a nimble warrior, capable of flipping, dodging, swimming, guarding, and much more. In order to fight Wisdom’s seemingly endless employees that all know how to fight, Josh will use the Legacy. This weapon has the potential to instantly morph into various types of melee or ranged weapons. At the start of the game, it can morph into a long sword and/or a rod. Most bosses have a Legacy weapon that will be earned after defeating them. By the end of the game, Josh will have an arsenal that he can use to fight the forces of Wisdom. The fun thing about the Legacy is that each weapon can be called upon during the middle of a combo. For instance, using the katar can let Josh launch enemies in the air. You can then hit a shoulder button to switch to another weapon to either slam them down or keep them airborne. There is a lot of variety to this. You can switch the order of weapons in the pause screen. You can also check out Data Modules left by enemies to read more about the characters, setting, and so on. All weapons are capable of performing a powerful Legacy Drive attack after Josh uncovers two Ley Seeds. The sword can be used to create an area of fire. The boomerang can unleash gusts of wind. These Legacy Drives are a clever idea and are sometimes used to solve puzzles or assist Josh in reaching new areas. It’s important to spend time with each weapon because the more you use them, the more powerful they become. Going through the game’s levels and destroying mobs of goons is fun at first, especially after you acquire a new weapon for the Legacy. Unfortunately, the enemy AI is dimwitted and makes the game embarrassingly easy. The only true challenge comes with dealing with the game’s finicky camera. While you can lock onto enemies, the camera will constantly mess up and cause you to get hit by attacks that would normally be easy to dodge. Normally EOE lacks any sort of challenge thanks to a generous save system and unlimited retries.

EOE has the look of an early PlayStation 2 game. The character models look fine, but some of the textures could have benefited from extra polish. The stages fared better; it’s fun to explore tops of buildings via climbing on signs or scaling giant cliffs. The music is lacking. Action games are perfect venues for upbeat and fun music but the music in EOE mainly consists of nothing but unmemorable techno beats. However, the voice acting is fantastic. With veteran voice actors like Jennifer Hale and Cam Clarke in the cast, the otherwise average script has some extra pep.

EOE: Eve of Extinction doesn’t take long to finish. By the time you see what happens to Josh, Elliel and the higher ups of Wisdom, only six to ten hours will have transpired. Of course, no action game would be complete without some extras. Alongside various levels of difficulty, there are a variety of side modes you can check out. These include a boss rush mode and a survival mode. Furthermore, starting a new game plus will keep the experience level for each of your weapons. If you can’t get enough EOE, then you could increase all of the weapons to their maximum power by going through the game multiple times. No matter what you do, the low cost of entry is a perfect way to get into this obscure action game. Alongside some minor presentation issues, the game’s biggest problem is the moronic enemy intelligence and faulty camera. For me, they weren’t deal breakers and I was able to enjoy seeing Josh and his girl take care of the one percent with a variety of weapons.

Overall, 7/10: EOE: Eve of Extinction is not the best action game on the PlayStation 2, but it’s far from the worst and capable of providing some enjoyment.