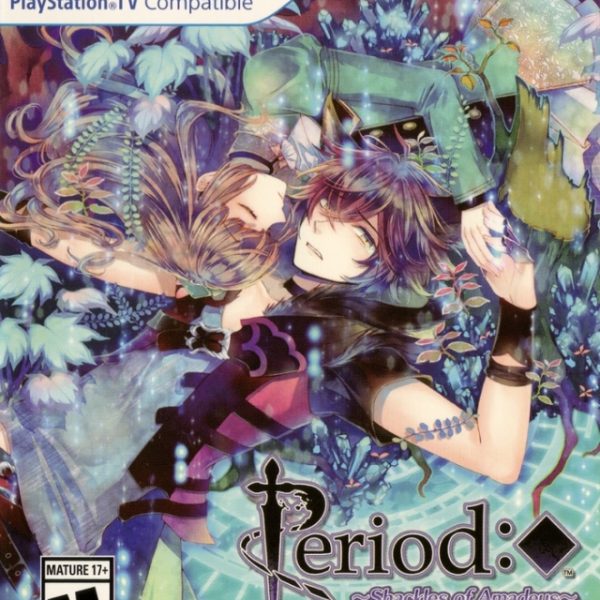 Sword Art: Online. .hack. Death end;re Quest. Games like these use a theme of having a protagonist explore both a real world and a virtual world. The virtual world takes the form of an MMORPG. As they explore the MMO, they try to connect the dots between it and the real world. And, if they perish in the virtual world, then they die in the real one. It’s an interesting idea; I’ve always liked discovering the reasons why the players are locked in the game and the threads that connect outside of it. Period: Cube ~Shackles of Amadeus~ uses this theme, but it does so as a visual novel. The majority of the game has you reading text, making choices, and determining whether or not the lead character will find love. How does it compare to the above mentioned games? Other than the hands off game play, it does quite well.

Period: Cube puts you in the shoes of Kazuha, a young girl that is trying to find her missing brother, Shiki. Since her brother has left for college, she hardly hears from him. Kazuha and her childhood friend Hiroya decide to search the college for his whereabouts. After entering his room, they see that his computer monitor has a load screen for a popular MMO called Arcadia. Rumors have been circulating that one of the worlds in the MMO, World V, causes players to enter a coma. However, Kazuha and Hiroya decide that this is the only clue to find Shiki. Kazuha creates a character and ends up in World V.The situation looks grim. World V is filled with danger from every direction. There are other players that view Kazuha as a tool. There’s a data clearing bug that is slowly encroaching on the safe havens of Arcadia. Worst of all? If players die in Arcadia, then they die in the real world. Kazuha’s time is short, but luckily, there are some handsome men that wish to help her find Shiki’s whereabouts. There’s the leader of the angels, Astrum. There’s the notorious PK’er, Demento. Of course, there’s also Kazuha’s childhood friend. These potential mates have their own route that lead to the truth behind Kazuha’s brother’s disappearance.

It’s important to remember that Period: Cube is a visual novel. It has a grand setting and an impressive amount of lore, but the majority of the time with it will have you reading text. During certain parts of the game, you’ll need to make choices that could raise the affection of whichever man’s route you’re on. If you’ve played a visual novel, then you know what to expect.Period: Cube has a few instances in which Kazuha will need to choose “battle” options because there will be times when the story takes her to a battle. You can have Kazuha use a weapon, use a spell, or defend. They’re still “choices” that simply move the story forward, but they work well for the game’s setting. As expected, the story is the selling point. It takes a theme we’ve seen before and molds it to something unique. The downside is that some of the routes are disappointing. Visual novels should have a build up of romance, but some of the guy’s that Kazuha can end up with feel like they’ve been hit with a “love at first sight” syndrome. It makes their relationship hard to believe.

A few other features in Period: Cube are worth noting. One is a glossary that gets filled with key words. Kazuha isn’t a gamer, so she’s learning terms like MMO, aggro, PK, hacker, and others for the first time. The game will define these for you, which is a nice touch. There’s also the ability to hop to various nodes on one of the guy’s routes. You can even alter their affection if you wish to see a certain ending. Little touches like this are great.

Typical of the visual novel format, Period: Cube’s graphics have colorful, vibrant backgrounds and talking head character art. The characters that appear on screen during dialogue use a familiar living animation style that other games in the genre use. At times, there will be full-screen CGs. If you’ve played a modern visual novel, then you know what to expect. The music is relaxing. Even if the situation is tense, the music tends to favor an easy listening style. Finally, and as expected, the entire game is voiced in Japanese.

One run through Period: Cube can take as little as three hours. There are multiple endings and choices to make, but multiple saves and a handy quick save can let you see everything for your desired character in little time. Once again, we have a visual novel in which you take the role of a young girl that inevitably gets surrounded by handsome bachelors. However, the setting is what really makes this game stand out. Yes, we’ve seen the real world/virtual world cross over before. But, Period: Cube has something special about it that makes it worth a read.

Overall, 8/10: Enter the world of Arcadia to find Kazuha’s missing brother, and maybe find true love. Period: Cube ~Shackles of Amadeus~ is another recommended visual novel for the PlayStation Vita.