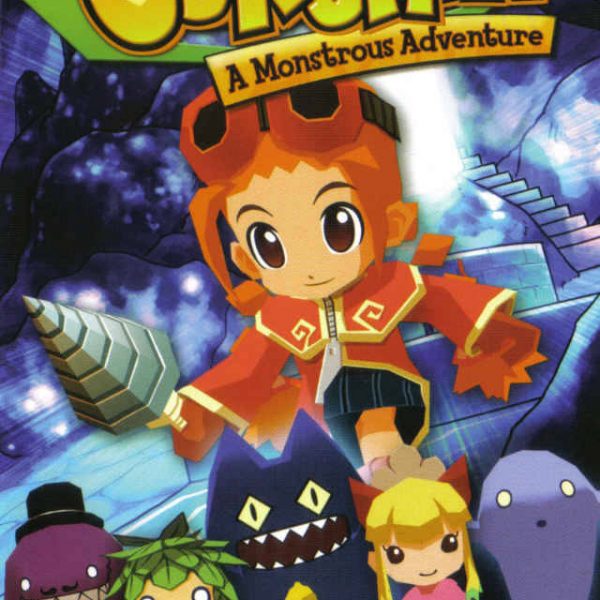 Author’s Note: This review was originally published on April 23rd, 2007. This was another game I was looking forward to since its announcement. I was bummed when I saw the credits; it felt like the journey was just beginning.

I don’t know about the rest of you, but my PSP was hurting when it came to RPGs. Gurumin: A Monstrous Adventure arrived just in time. Produced by the creators of the critically acclaimed Ys series, Falcom, Gurumin was originally a PC game. This action RPG will keep you playing from beginning to the end, but it feels as though it’s over before it even starts.

Gurumin places you in the role of young Parin. This spunky twelve year old girl has been forced to live with her grandfather while her parents are off on an adventure. In the mining town of Tiese, Parin finds little to do; that is until she meets a monster named Pino. Saving Pino from a dog, Parin and Pino become friends and Pino takes the human to Monster Village. There, Parin learns about the secrets of humans, monsters, phantoms and a legendary drill weapon that only Parin is able to use.

Parin’s quest is a light-hearted one in every way. While it lacks the depth and character development of many RPGs, it still has an endearing cast of hilarious characters. Humor is the key in Gurumin’s story. While it can be a bit over the top and too anime at times, the rest of the time it will put a smile on your face. Unfortunately, Parin’s quest is also a short one in every way. There is only one ending, and getting to that point while clearing everything on the normal difficulty mode took me less than 20 hours. Yes, there are various difficulty modes, but the only prize for clearing them are new outfits for Parin. Worth it? Not entirely, unless you’re a perfectionist and/or a masochist.

Granted, on the basic modes of difficulty (Easy and Normal), this game is far from challenging. Parin’s drill weapon allows her to face foes and break obstacles. The more it gets used, the more powerful it gets. You can perform a charge attack that breaks enemy barriers, and attach elemental parts to it for additional effects. As Parin takes damage, the drill goes down in level. However, Parin has a variety of hats to wear that not only improve her defense; they also grant various bonuses to her. So, it takes many hits for the drilling level to go down. There are items that can be used to boost the drill’s level as well. As you progress through the dungeons, the only part that can be considered challenging is discovering all of the treasure chests and jars. If you complete the dungeon 100 percent, you will get a gold medal. These can be used to acquire new pieces of head gear for Parin.

Actual combat can be a bit hectic at times due to the camera not moving as fast as Parin does, but Parin is able to dodge and jump around any potential threat. She’ll also learn a variety of special attacks and combos that easily decimate most foes. Bosses can be a challenge, especially the only optional one, but with the right preparation and plenty of healing items, even these can be overcome with little trouble. I enjoyed the fact that the game was simple, but the camera could jumble up at times.

When you’re not in the dungeons, you can go around towns and talk to the villagers. In Tiese, you can buy and upgrade your equipment, open mystery bags, and trade your medals for prizes. In Monster Village, you can give the monsters back their property in order to unlock new worlds. There are a few mini-games tossed in the mix for additional medals to be earned, and you can go back to previous dungeons to acquire more money and junk, the latter being used for upgrading your helmets. There is always something to do in this game, but as mentioned, it is over before it begins.

Still, the game is great to look at from start to finish. Combining 3D polygons with the anime style of Di Gi Charat, Gurumin is a beautiful world to explore. There are plenty of emoticons that portray the character’s moods; however their body language severely enhances their coming to life. Further bringing the characters to life is the great voice acting cast. While you have to complete the game once in order for you to hear the original Japanese voice acting, the American acting does a fine job of portraying the characters, especially the monster friends. Finally, the music was done exceptionally well. The Ys series has always been the series for amazing music, and Gurumin’s tracks are ranking right up there with the best of them.

When Gurumin ends, you are given the option to save and start your new journey with some of the things you have acquired in your first journey. Getting everything will take some time, but it will take even more patience. The harder difficulty levels can really test your nerves, which makes the game go from fun to annoying. Personally, once through was enough for me. I may try it later, but with so many RPGs out, the likeliness of that is greatly reduced. Thus, this is a game you should rent. I feel that it will not be rare in the future, so if you want to buy it, feel free. As for me, I am going to play some other PSP games. Gurumin: A Monstrous Adventure is a cute, quirky little action RPG that can easily last you for a few days. This is especially true if you need an RPG to play. If the game was longer, then this would be a keeper.