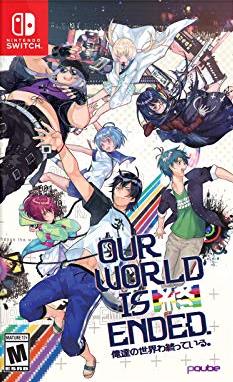 I think every gamer at one point in their life wishes they could be part of a video game company. Designing the characters,  writing the story, composing the music or just to putting their ideas out there. One thing’s for sure: creating video games is hard work. That’s apparent in Our World Is Ended. This is a visual novel where the leading character does the grunt work for a game development company called Judgment 7. As a visual novel fan, this premise alone was enough to get me interested. Further research lead me to believe that it would be a one of a kind VN that has more to offer than romancing a love interest. Indeed, Our World Is Ended does offer more. Unfortunately, none of it is worth seeing. Our World Is Ended might be one of the worst visual novels I’ve ever played/read.

Players are put in the shoes of Reiji Misaki, a starry-eyed new hire at Judgment 7. J7 is a small but dedicated game company that is trying to use new augmented reality technology to create the next big thing. During a test run with the AR helmet, Reiji sees a vision of his coworkers crucified to a destroyed building. The city is in shambles. A mysterious girl warns him that the “world is about to start.” Reiji isn’t sure if he had a hallucination or if the AR helmet was malfunctioning. Things return to normal when he removes the helmet. This is the start of strange journey where the video game world merges with the real one. The premise is quite intriguing. Who was that girl? Why did the city look like it was hit by a missile? What does her message mean? What’s causing these worlds to collide? There’s an ocean of questions that appear from the start.

Sadly, getting to these answers has two problems. The first is obvious if you’re familiar with developer PQube. Of course, I’m talking about perverted lingo that describes every female cast member’s bust. At first, it was funny. Eventually, it tapped into body-shaming. The level of perversion that the publishers reached will make anyone uncomfortable. One of the main characters is 13 years old. Discussing her anatomy with perverted tendencies is wrong. Bottom line. Which, brings me to the next problem: the characters. Reiji, who is a somewhat likable guy, is surrounded by an unlikable cast. The boss of J7 is Owari, a perverted and greasy computer programmer. His second in command is a disgustingly overweight (and perverted, obvi) scenario writer. J7’s artist is the tsundere Natsumi, who makes other tsundere look tame in comparison. By the end of the game, players may end up in one of their endings. I actually recommend getting the normal ending since it means less time Reiji needs to spend with one of these boneheads. Taking these issues into account, and throwing in a load of filler that should have been trimmed, Our World Is Ended’s narrative goes from something interesting to something unbearable. I’m a fast reader and abused the skip function, and it still took me nearly 15 hours to finish.

Throughout the game, Reiji will be forced to make choices that will determine which ending you get at the end. Sometime, the choices will appear in a familiar format: you have a list of options and just make a choice. Then, there will be times when the words “Selection of Soul” appear. These decisions are a little different than what most are used to. A selection of choices will marquee across the screen from right to left. Using the up and down buttons, you can highlight one and select it before it vanishes. Or, you can wait until a more interesting choice appears. It’s an interesting mechanic that I appreciated since most of the time VNs are very hands off. A handy quick save feature and a bevy of save slots let you experiment with different answers and results.

As unlikable as most of these characters are, I will give credit where it’s due: every character is beautifully drawn. The art direction in Our World Is Ended is gorgeous. I don’t like Owari or Asano one bit. That doesn’t mean I don’t mind looking at them. Yes, even seeing Iruka and all of his chubbiness is pleasing. I appreciate that the artists weren’t afraid to use every color code under the sun.  Musically, the game is about where you would expect it to be for a visual novel: situational but not memorable. Most of the time, you’ll be hearing the happy-go-lucky tunes. This is because, most of the time, the story isn’t serious. When things go dark (trust me, there is some heavy stuff) the music will match. The game is fully voiced in Japanese.

The further I got in Our World Is Ended, the more I wanted it to be over. This may have been because the game overstayed its welcome. The amount of filler in which emphasis on character’s personalities and/or cleavage could have been reduced by a third. Or, this may have been because I’m burnt out on visual novels. Reading all of that text over and over can really tire a gamer. Or, it may have been a bit of both. If anything, Our World Is Ended taught me to appreciate visual novels that move at a steady pace and have likable characters. In doing so, these other games made going through various routes to see other endings more enjoyable. I don’t recommend this game.

Overall, 3/10: Our World Is Ended overstays its welcome with its unlikable cast, perverted lingo, and abundance of filler. Thankfully, there are plenty of other visual novels out there that don’t commit any of these crimes.