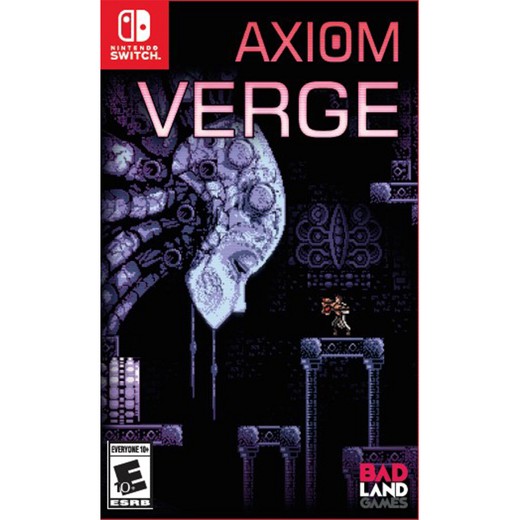 If there was ever a game that acted as a love letter to the Metroidvania (especially the first half of the moniker itself) sub-genre, then it’s Axiom Verge. Developed by a gentleman named Tom Happ, Axiom Verge is one of those games that most people will enjoy from start to finish. I say most people because there are a couple of design choices that make this indie overstay its welcome.

Axiom Verge is about a scientist named Trace. While working on an experiment in his lab in New Mexico, an explosion occurs that, under normal circumstances, should have killed him. Instead, he awakens in a bizarre alien world called Sudra. Guided by the voice of a woman named Elsenova, Trace is instructed to save Sudra. Trace remembers the explosion, but can’t remember how he got to this strange world. All he can do is listen to Elsenova and move forward. The story in Axiom Verge is surprisingly good. Trace has a dry sense of humor and a sharp intellect, which I appreciate. His commentary tended to match my thoughts during the scattered story sequences.

Most of the time in Axiom Verge is spent controlling Trace as he explores Sudra. Like your favorite game in the sub-genre, Trace starts out with a few basic abilities. Over time, he’ll acquire new ones that allow him to reach new areas of Sudra. Despite looking like a shut-in scientist in desperate need of a shave, Trace is surprisingly capable. He can jump high, and is a decent shot. His weapon is a space-age gun capable with a variety of bullets. There’s lasers, a flamethrower, spread shots, and much more. There really is something for everyone. Along with finding new types of ammunition, Trace will get some very unique upgrades.

In fact, these upgrades are what set Axiom Verge apart. Sure, there’s a boosted jump and a giant drill, but things really start to get interesting when you find the Axiom Disruptor. Using this, you can distort reality to unlock new areas and significantly weaken enemies. Axiom Verge has a fair challenge, so having all of these tools available will make things more manageable for Trace. A generous helping of save points that double as health springs make this a great game for newcomers, and multiple difficulty options can make it challenging.

But, all of this excitement that comes with finding new guns and upgrades comes with an issue. Sudra is big. There is a lot to find, sure. But with the potential for copious amounts of discovery comes the issue of actually getting to said discoveries. Axiom Verge lacks a form of helpful fast travel that makes each bit of backtracking last longer than it needs to. While you can mark reminders on your map for your reference, actually getting to those points turns the excitement of a new discovery into a slog.

It might comes as some solace to know that these journeys to all corners of Sudra are visually impressive. Axiom Verge is a 2D game that mixes a retro style with the color schemes and details of something modern. From the first parts of Sudra with bubbling red slimes that burst when you shoot them, to the towering bosses that look like they could take out Trace with just one glance, Axiom Verge is a damn fine looking game with magnificent detail. The game’s soundtrack is a delight. Again, there’s a retro style of instrumentation, but it gets combined with solid arrangements and melodies. Having head phones with the volume cranked up a few notches is highly recommended.

In fact, if not for the world of Sudra being so big and causing the game to overstay its welcome, Axiom Verge itself would come highly recommended. But, with the way things are, I give it just a standard recommendation. I feel like my 12 hour playtime could have been less. If that were the case, then this would have been one of those classic Metroidvanias that I would replay. But, Axiom Verge is a one-and-done game. If you like Metroidvanias, then you’ll like Axiom Verge. If you love Metroidvanias, then you’ll (still) like Axiom Verge.

Overall, 6.5/10 – Axiom Verge is fun, which is fine. I just get the feeling that it could have been more than fun.