Hmm. 2:00 in the morning. Should I sleep or do I have time for one more puzzle? 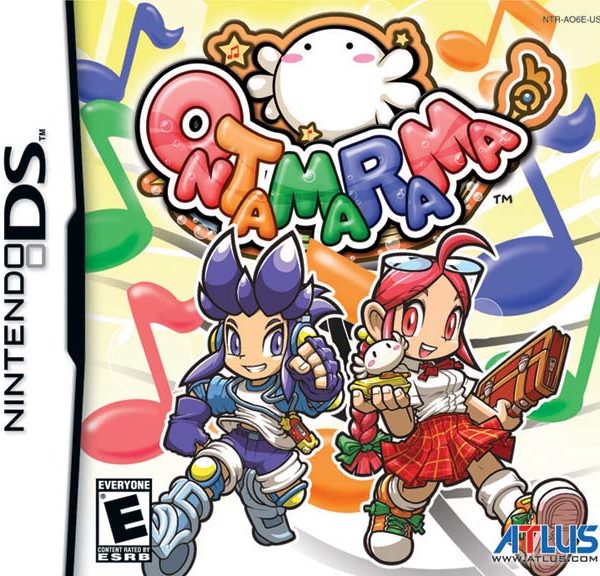 Author’s Note: This review was originally published on November 27th, 2011 as shown by the “witty” taglines. I remember counting the days to this game’s release. I was probably the only one who was looking forward to it.

When games have an obscure title, there is a high chance that I’ll do my research and look into it further. Such was the case with Ontamarama, the music and rhythm game for the Nintendo DS. After watching a few trailers and learning what the game was about, I had to pick it up. I am so glad that I did, because I have not had this much fun with a music game since Dance Dance Revolution. While the game might be short and has no multi player mode, it has the lasting factor of a classic.

Welcome to Onpu Island!
A tropical paradise with all the trimmings, Onpu Island is a place where music meets magic. Spirits known as Ontama are able to produce music with the help of conductors known as Ontamaestros. Ontamaestros gather multiple Ontama together using Track Discs in order to create songs of all types for all people. At the local school on Onpu Island, two children are striving to become great Ontamaestros. The first is Beat, a free-spirited boy with high energy and high motivation. The second is Rest, an independent girl with a bright personality who loves anything fun. Their teacher, Coda, has just finished the lesson of the day and has sent them home. On their way, they encounter a lone Ontama being pursued by three evil creatures. It is up to these youths to save the Ontama, as well as discover why anyone would want to harm these musical beings.

This light-hearted story comes as a welcome. It lacks development and you meet the characters for only seconds at a time, with the exception of Coda, Beat, and Rest, of course. However, everything about Onpu Island is colorful and fun, making it easy for anyone to enjoy.

Tapping, Holding and Blowing. Seriously!
The bulk of Ontamarama involves you battling it out with another character in a song battle. The top screen shows your score, your performance level, how much time you have left until the song ends, and you chain number. The bottom screen has notes on a clef that will need to be filled by tapping an Ontama. The bottom screen also shows your max chain number. So, how does this all work out in terms of game play?

As I mentioned, notes will move from right to left until they reach the end of the clef. At first, the notes will be empty. By tapping the Ontama that continue to appear on screen, the notes will be filled. You need to tap them before the above note reaches the end, otherwise the Ontama will disappear and the note will not be played. By tapping the Ontama on time and filling the notes, you will need to hit the directional button to play the note when it reaches a circle at the end of the clef. Timing is key, and you will be rated on how well you keep the beat. The ranking goes Master, Great, Good, and Miss. If you manage to not miss a note, your score will increase as your chain combo increases. Keep doing this tapping and pressing until the song ends. It is very basic, but there are some other techniques at your disposal. For one, you can circle Ontama of the same color in order to not only gain more points, but to fill the notes quicker. If things get too hectic, you can blow into the microphone to clear all the Ontama on the current screen. However, you only have a few of these blows at your disposal so you have to use them wisely. You can also swing Ontama in order to rack up some extra points. If you draw a circle around an Ontama and hold L or R, you can use the Hold technique in which you draw multiple circles around multiple Ontama of different colors. Again, this increases your score.

Notes are only filled by red, green, blue and yellow Ontama. However, there are other types of Ontama that appear on screen. Huge Ontama have the same colors as the regular Ontama, but they take longer to clear because of their size. If you manage to swing the Huge Ontama, you can get a good amount of extra points. The White Ontama help increase your score simply by tapping them. The Black Ontama will decrease your score if you touch them, but by using the Swing technique you can use them to your advantage. Black Ontama also have a tendency to move towards the colored Ontama, so you need to be careful not to tap the Black Ontama by accident.

The songs start off basic, but will become quite complicated as you progress further in Story Mode. There are two difficulties, Easy and Normal, and by finishing the game on Normal you can unlock the challenging Hard difficulty level. Besides playing through the story as either Beat or Rest, you can chose to play any song you have previously played in Story Mode in the awesome Free-Play Mode. Here, you can try to get the best ranking possible in order to obtain Onpu Points to use at the Shop. At said shop, you can buy new graphics, upgrade your abilities, and even buy some new songs. Another reason for completing the game once is that it unlocks Challenge Mode, where you play multiple songs in succession. For those who want to show the game to new Ontamarama players, there is a Tutorial Mode that explains the basics for playing. There is always something to do in this musical masterpiece. Getting the hang of Ontamarama will take seconds, but achieving an S ranking on all the songs in Hard mode will take months. Thus, this game has appeal to everyone, no matter the skill level.

A Rainbow World.
Graphically, this game delivers. All of the characters were animated beautifully during the song battles, and the bright, colorful atmosphere of each area makes the game that much more appealing. There is plenty to see in Ontamarama and your eyes will thank you for such a colorful, well animated experience. Do not worry about the game being too colorful, either. I know that in some music games, the colors and graphics can distract you from concentrating on getting the song accomplished. Ontamarama has it so the bottom screen has less brightness than the top screen during the song battles.

Groove to the Ontama Beat!
For a music game, you more than likely expect a great sound track. Ontamarama has just that. With songs of all genres including pop, rock, jazz, and techno, Ontamarama has a song for everyone. While a couple of the songs I could do without, most of them had me jamming. Yes, I did get funny looks while I was bobbing my head to the groovy beats, but I digress, the music is great, as expected. The sounds were simply adorable. The little chimes that the Ontama make and the way the speech sounds were some of the cutest things I have seen and heard in a long time.

Conducting Until the End.
The story is short, and the game may not have enough songs to please the hard-core music gamer. Still, with plenty of extras to buy and unlock and with a vast amount of challenge to be had, Ontamarama will last you for a while. Cheery games like this are hard to find. The obscure title and length may make some people turn their heads, but Ontamarama is a classic through and through. Pick up your stylus and start your quest to become the best Ontamaestro of all.