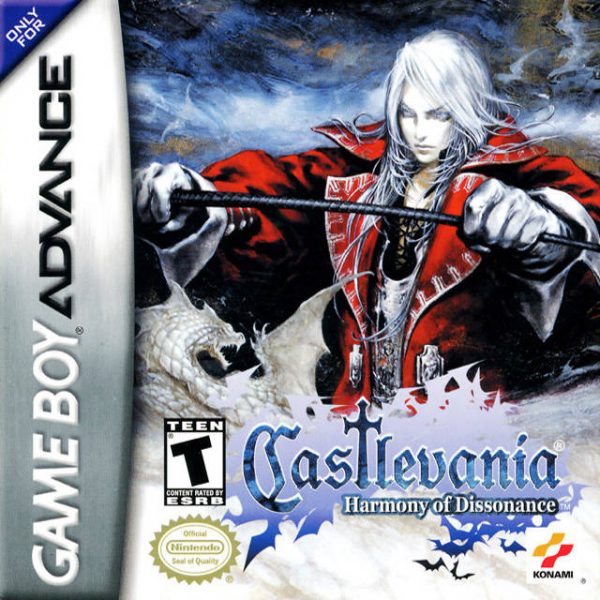 Author’s Note: This review was originally published on November 5th, 2007. Like other reviews from that era, this review contains “witty” taglines that separate each section.

The second Game Boy Advance Castlevania was released at just right time. Seriously. I remember it well. I was a freshman in college, and I forgot to bring my PS2 with me to my dorm. All I had was my GBA. Luckily, Castlevania: Harmony of Dissonance was released only two weeks after classes started. Needless to say, I was thrilled to play another vampire slaying game, as well as one of the best GBA games out there at the current time. I think that it is time to give Harmony of Dissonance some much needed recognition. It is not the best Castlevania in the bunch, but it is still a fun one.

The Albino Belmont.
Unlike the macho men Richter, Trevor and Simon, Harmony of Dissonance stars Juste Belmont. At first glance, this Alucard-esque gentleman may seem frail with his stylish clothing and flowing white hair. Looks can be deceiving. Juste is of the Belmont blood-line, and with the legendary whip in hand, he is one tough cookie. Juste and his best friend Maxim have entered the mysterious Castlevania to find their kidnapped friend, Lydie. Why did Dracula’s minions kidnap her? Will Juste and Maxim be able to overcome the mysteries of Castlevania? No matter the answers to these questions, one thing is for sure: Castlevania is back and Dracula needs to be banished again.

Once again, there is little plot in this game. However, I did not mind. Castlevania is all about Dracula vs. the Belmonts. Unlike Circle of the Moon, Harmony of Dissonance stars a Belmont member. Because of this, I found Harmony of Dissonance to have a good story, one that is better than Circle of the Moon. Is it deep? Not at all, but it is still fun. Besides, Juste is just as capable of vampire slaying like the other Belmonts. I think it is time he gets some recognition.

Coloring Books!
Juste uses the whip like a pro. His regular attacks are potent enough to get through the game. However, Juste has a few goodies at his fingertips. Throughout the castle you will find relics that grant him abilities like the double-jump, enemy identification, and the soaring air leap. The sub-weapons such as the knife and holy water are back, as well as a new sub-weapon that allows Juste to let loose with a flurry of punches. The most exciting feature are the colored spell books. There are various colored books in Harmony of Dissonance that, when combined with a sub-weapon, let Juste cast powerful magic. Experimentation is the key to success when it comes to finding your favorite and most useful magic attack. While Circle of the Moon had a plethora of combinations with the DSS system, Harmony of Dissonance has slightly less magic combinations. Personally, I preferred the spell books to the cards. For one, the books are found throughout the castle. This means you do not have to rely on a monster dropping one. Monsters still will drop equipment and items for Juste, but they will never drop a magic book. Also, it is far less cumbersome figuring out what the spell books do. This system added to my enjoyment with Harmony of Dissonance. When the spell book system was combined with classic Castlevania action, the game play was spot on.

The Half Moon Rises…
One thing is for sure: the graphics in Harmony of Dissonance are more colorful than they were in Circle of the Moon. Also, they are a bit brighter. Unfortunately, they are not bright enough. While you do not have to play in direct sunlight or under a desk lamp, the graphics can still be a bit challenging to see in regular lighting. It will not inhibit your game play as much as it did in Circle of the Moon, but it can get annoying. When you do see what you are playing, you’ll notice detailed sprites and a detailed castle. The spells that Juste can cast can often times take up the whole screen for some cool effects.

Harmonious Harmony.
The music was fine. I’m not sure what else to say about it. It was there, and it did the job. The sound effects were the same. You’ll hear the occasional “Hah!” or “Yaah!” from the characters. Other than that, it is regular whip-slashing sound. We all know that portable systems, the GBA included, were not much for music. Harmony of Dissonance sounds better than most, but it is not much to write home about.

With Truth, And Juste For All!
Harmony of Dissonance is short, and one play through should take you about 15 hours. Finishing the game once allows you to start a new file playing as Maxim. I enjoyed the game from start to finish, but many parts of it were too easy. Also, I wish the developers did something about those damn, semi-dark graphics. Despite these flaws, I recommend Harmony of Dissonance to any Castlevania fan, as well as to those who enjoy action games.  Juste Belmont is on the scene, and vampires do not stand a chance!

Overall, 7.5/10: It may not be the best Castlevania in the bunch, and it will never recapture the sheer joy of Symphony of the Night, but the game deserves the recognition and praise that is given to other Castlevanias.